I don’t know how you spent your weekend, but I spent part of mine in the sleepy little town of Goondocks. 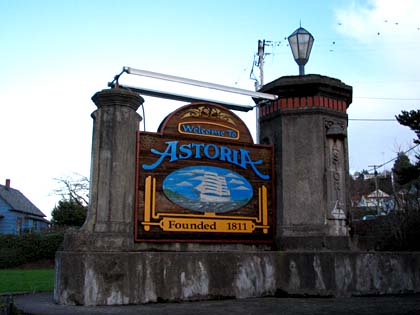 The Goondocks, home to the events of The Goonies. Otherwise known as Astoria, Oregon.

If there were such a thing as a pilgrimage to Mecca for dorks who grew up in the ’80s, I’d personally make a strong case for this particular trip to be granted the honors. Memorizing passages of Richard Donner’s admittedly wretched kid-flick is a sort of rite of passage for us navel-gazing dopes who grew up in the Reagan era. So my trek to the Walsh homestead was a vaguely religious experience. Except that instead of kneeling in supplication to the place where a great prophet made proclamations, I took photos of the house where an asthmatic Samwise Gamgee grew up. 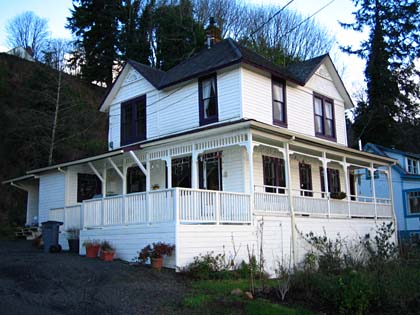 I probably should have taken a shot of Data’s house next door, but without the dangerous zip line connecting the homes the magic just wasn’t there.

I don’t appear in this photo because my girlfriend very sensibly stayed with the car at the foot of the hill as I slogged up through the drizzle and muck to behold a building to which I have no personal connection. Nevertheless my mouth was dry and my chest was tight as I reached the top of the incline, and not just because I need more exercise (it wasn’t that steep a climb); I was just intimidated to be standing in front of a house that I’ve seen on video far more times than I would care to admit. It’s a little bit embarrassing, honestly. Still, as proof that I do in fact have some sense of dignity, I didn’t actually do a Truffle Shuffle at the front gates.

One thing they didn’t mention in the movie is that the Walsh home is constantly under a barrage of booming sea lion cries. 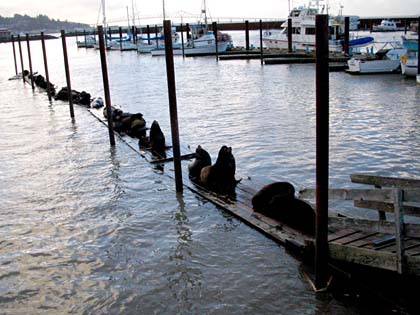 Apparently the docks down the hill are a favorite for these guys. They’re totally huge, not to mention incredibly loud.

Elsewhere in town we tracked down some other Goonies landmarks, including the jail the Fratellis escape from… 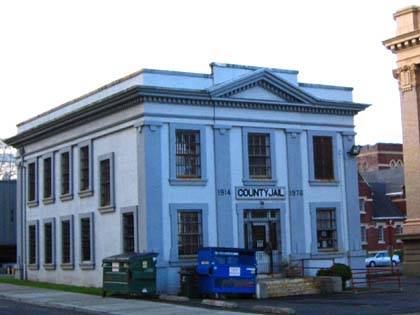 …and the museum where Mikey’s father worked, which is handily across the street from the jail. 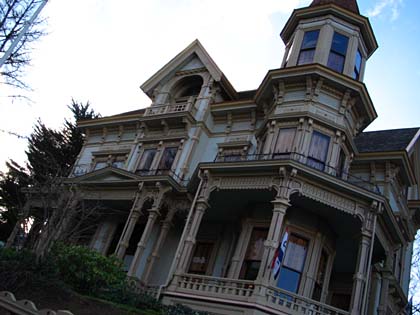 No sign of a vast network of underground caverns filled with traps, volcanoes, eskimos and Konamiman, alas.

And finally, a long-distance shot of the Walsh home. It’s a nice view that would probably be a little nicer without the cheap pre-fab mobile homes in the foreground. Oh progress, how you confound. 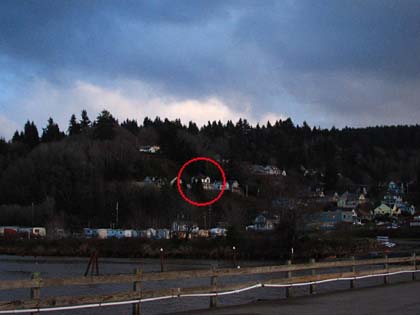 We had dinner at a fine restaurant in downtown Astoria by the name of The Silver Salmon. I’d actually rate it the worst food I ate the entire time I was in Oregon, but I wouldn’t hesitate to go back again. See, the Silver Salmon wasn’t bad; it was in fact very, very good. It’s just that all the other meals I had while in the Portland area rated somewhere on the other side of “mind-blowing,” so what would have been excellent under any other circumstances paled a bit.

I took the time to celebrate the Goonies legacy on the tablecloth, though. It’s even better than a tip. 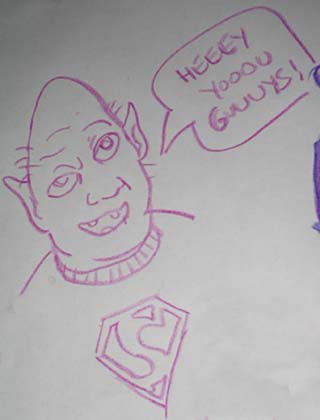 I also paid tribute to Cyclopes the Kitten and tried to make my girlfriend feel guilty for being party to the murder of a gentle salmon. It’s a wonder the restaurant management didn’t send the police after me. 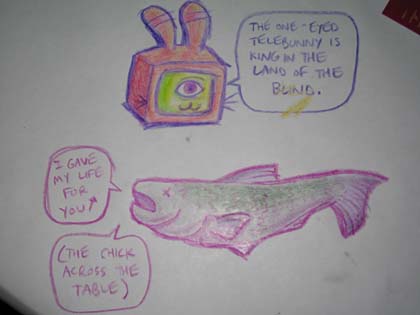 Sadly, my journey should have ended there but didn’t. As discouraging proof that shameless product placement works even 20 years after the fact, I made one final purchase before leaving town. 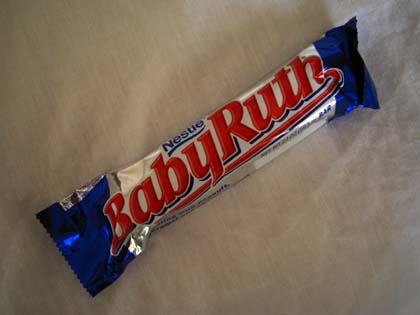 Oh well. At least Sloth would be proud of me.