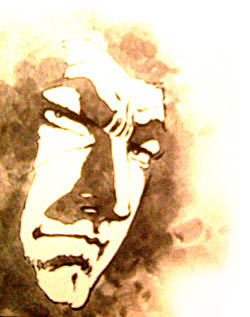 In case you somehow missed me babbling about it a few weeks back, Viz Media will begin publishing an ongoing series of Golgo-13 graphic novels next month. This makes me very happy, because I’ve been wondering why (given the rising popularity of manga in the U.S.) Viz has completely disregarded one of the most enduring franchises ever. And, it should be noted, one of the first series it attempted to pubish back in the ’80s when no one in America except Carl Macek and a handful of really, really scary people with an unhealthy fixation on the Dirty Pair cared about manga.

Everyone always seems surprised to find that I like Golgo-13. Given that he’s an amoral, ruthless murderer whose treatment of women makes James Bond look like a staunch monogamist and all. Fair enough, since that’s pretty much the exact opposite of my normal tastes… but Golgo-13 has history on his side. He’s the Rolling Stones of manga; as far as I know Takao Saito’s sniperiffic adventures are the longest-running manga series to be continuously serialized in Japan. It’s a little daunting to see ten or 15 volumes of a given manga on the store shelves, to say nothing of Ranma (nearing the end of its run at 32 or so), but Golgo-13 is up to something like volume 135. That is an awful lot of precise headshots, and you have to respect that much killin’ and shootin’.

More importantly, Golgo-13 was my introduction to manga. Plus it was a pretty decent NES game. Well, no, the NES game is kind of awful, but I still like it.

I’ve made it my mission to collect every single chapter of the manga published so far in the U.S. — which, I recently learned, was actually quite a bit more than I originally realized. I’d picked up the first of the two comic-length issues Viz published back when I was in junior high, shortly after I picked up the NES game, and I collected the three-part squarebound “The Professional” miniseries (in which he killed an elderly Juan Peron) when it came out a year after that. Imagine my grim-faced delight when I discovered last month that Leed Publishing also translated four 168-page volumes of snipery back in the mid-80s.

Like it or not, I’m going to share them with you over the next month or so. I’m compelled, because Golgo-13 is awesome. 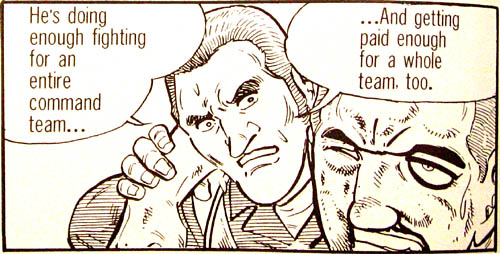 See, even these Mossad dudes agree, and they’re hardcore. Especially the one whose fingernails were ripped out by Nazis.

In case you’re not familiar with Golgo-13 — aka Duke Togo — he’s a man of uncertain nationality with a vaguely Asian appearance that allows him to blend in with the natives in more than half the world. He’s capable of speaking an unreasonable number of languages, has incredible physical prowess and can shoot anything that moves with 100% accuracy from ridiculous ranges. As the book says, he’s the perfect machine of snipe, and his comics don’t really have much dramatic tension since you know he’s going to kill his target and escape alive; the appeal is mainly seeing what sort of elaborate situation Saito (or Saito’s army of lackeys) is going to concoct for him and how he’ll pull off the next impossible hit. His catchphrase is “…..” and he operates according to a strict code — if he takes a job, he’ll kill anyone who jeopardizes his mission, but there are certain jobs he won’t take, suggesting that maybe he’s a swell guy underneath it all. 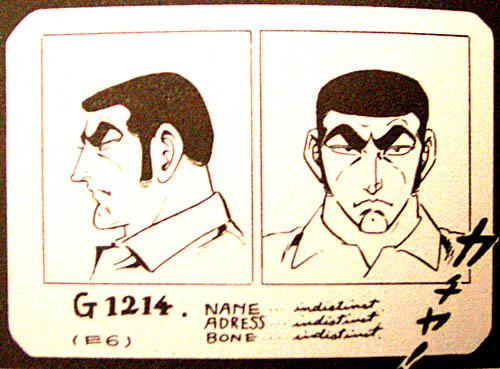 What a man of mystery! His name, adress and even his bone are indistinct! Please note this is from the very first volume of the series — not only was he fairly talkative and even smirked sometimes, but he also hadn’t settled on a number quite yet.

Anyway, brace yourself. There’s plenty more of this nonsense on the way.

12 thoughts on “Perfect Machine of Snipe: Part the first”