Don't even think of buying this game if you don't have someone else to play it with.

As a single player experience, Ice Hockey is decidedly lacking. The computer opponent is a breeze to outplay, even at the most difficult level. This isn't a flaw in the game, just something that bears mentioning. After all, it isn't as though Street Fighter II? or Bomberman '93? have particularly deep single-player experiences, and they're still classics.

It's as a competitive game that Ice Hockey shines. Despite sporting simple, throwback graphics reminiscent of such NES launch titles as Pinball and Urban Champion, Ice Hockey proves to be much more in the Excitebike? vein. Its depth of gameplay belies the dated appearance and creates a great dynamic between two players.

There are no NHL teams or player licenses for this title. Instead it takes an international view with the different teams representing different countries as if it were the Olympics. Of course, there is no difference between the countries except for uniform colors and that flag that flies, but it is nice way to differentiate between teams. Plus, it gives you the chance to relive the classic US/Russia rivalry that was going on when the game was released. 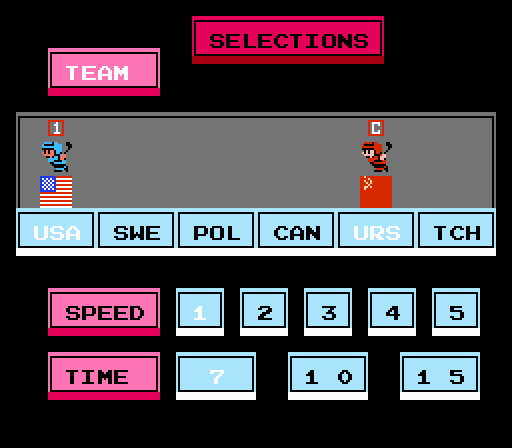 Recreate the 1980 US Olympic hockey team's "Do you believe in miracles?" game.

The depth of the game comes is in choosing your players. Each team is limited to four regular players, presumably due to NES sprite limitations. But each player can be one of three character types: fat, regular, or skinny. The fat guys are the strongest, able to check the hardest, withstand their opponents' checks and make the most powerful shots. To balance this, the speed at which they skate across the ice is roughly the same as the text speed of Xenogears. The skinny guys on the other hand are quite literally capable of skating circles around the fat guys, but they'll fall over in the gentlest breeze. The regular guys, of course, are statistically in the middle, because that is how video games work.

The fact that, twenty years after its original release, no one has yet determined a single, foolproof, game-winning combination of players for Ice Hockey speaks volumes about the game's brilliant balance -- it offers the flexibility to use any number of strategies. While I personally prefer the combination of three fats and a skinny, I know others who swear by two fats, a medium, and a skinny. Still others think two fats and two skinnies is the way to go. And so forth. 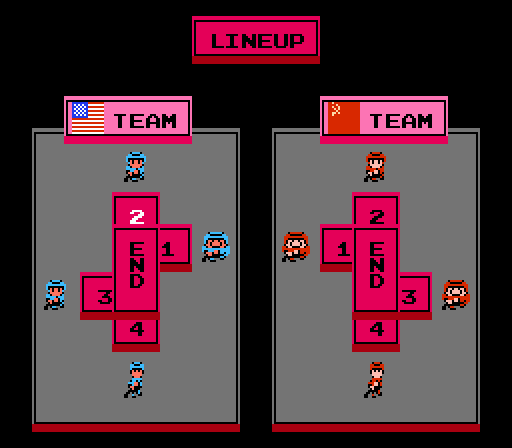 If that's the lineup the US team chose, no wonder they were underdogs in the 1980 Olympics.

Once on the ice, the game is fast-paced and frenetic but rewards the use of actual skill. Precise player positioning and passing the puck down the ice will get you in position to take a shot. Then it boils down to you versus the other player. Do you hold down the action button to get a faster shot, giving the other player more time to get his goalie into position? Do you take the weak shot with your skinny player? Or do you skate around waiting for your fat players to get down the ice, giving the defenders more of a chance to take the puck from you?

Even though defensive controls don't give you direct control over a single player, the team-based control scheme is still precise enough to thwart your opponent -- especially when you get one of your team members close enough to body-check him. And when your opponent scores against you, the fault is entirely yours for not figuring out the angle the opponent's shot would take and getting your goalie there in time. 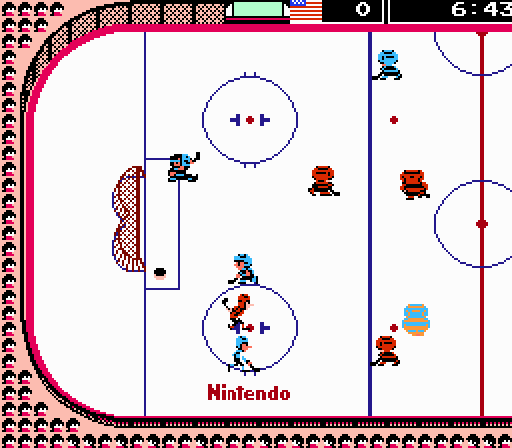 The US goalie is way out of position. Only Kurt Russell can help him now.

No hockey game would be complete without fights, of course. Ice Hockey has its share of fisticuffs, and they're glorious. When two players scuffle, your immediate response should be to pound the pass button as quickly as possible -- otherwise, it's your player in the penalty box. And if you need variety to spice up your life, you can always input special codes to pull out the goalies or send the puck on a never-ending slide.

Ice Hockey is every bit as fun to play today as it was when it was first released. The reason? Simple: Way back when consoles couldn't push hundred of polygons, games based on sports had to be tuned for fun and balance, not accuracy to the source. Like Tecmo Bowl?, Ice Hockey holds up through the ages, whereas no one would give a second thought to the officially-licensed hockey and football games of a few years ago.

So. Do you have a friend? Do you like a good arcade sports competition? Do you want the thrill of winning by a last-second goal? Then give Ice Hockey a download.