The future is a very dangerous place.

Thugs around every corner, crazy people shooting holes in the ground, a criminal population mostly run by women in tights, rolling barrels, falling girders. RoboCop's vision of Detroit is even more frightening than the real thing. This half-man/half-machine/all-cop lives to protect the innocent, but does he even stand a chance against the most advanced autonomus robots the future has to offer -- the infamous Terminators?

If the Super NES is to be believed, no. 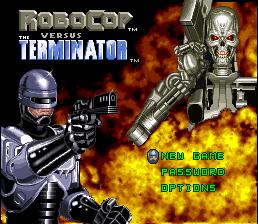 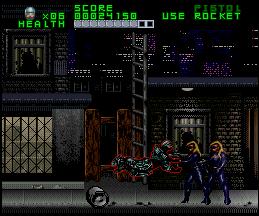 RoboCop Versus The Terminator is an awful game that puts players in the role of RoboCop and promptly sets about killing him. It begins as a standard side-scrolling shooter with perhaps a promise of cheap fun, not unlike RoboCop's arcade debut. It even promises a little tiny depth, maybe -- collecting some extra lives and weapons will require some platforming and backtracking (though not in a Metroid way). But once you reach the second level, you start to realize that you won't find anything in this game besides frustration. It's not that the levels are terribly designed, per se; they're not perfect, but at least they're playable. But they lack a few very basic necessities, like checkpoints, or the ability to respawn in a recent location when you die. The future, it seems, is full of long and convoluted levels, and the last thing anyone wants is to die right at the end and be shuttled all the way back to the very beginning.

Unlike its Sega counterpart, which armed the player fairly well, the SNES version only gives you space for one weapon in addition to your primary gun (which can be upgraded to a slightly more powerful laser version). Not that it matters -- when RoboCop dies, he loses any rocket launcher or laser upgrade he might have collected, even if he began the level with them. That's right, it's just you and your puny ol' Auto 9 against an army of nigh-invincible androids. Enjoy!

Combine all this with an escalated difficulty that goes from boring but bearable to relentlessly cheap and unforgiving, and there you have the essence of the RoboCop Versus The Terminator experience: Total frustration. 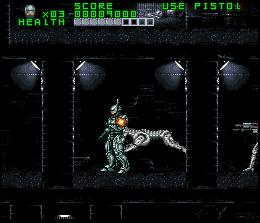 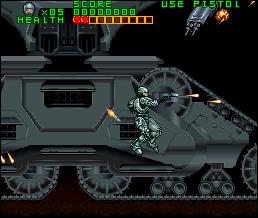 This game demonstrates some odd design choices on the developer's behalf. For starters, RoboCop's Auto 9 handgun is somehow capable of making people explode and disappear whereas the Genesis version has actual blood and gore. Some mysterious entity throws rolling barrels throughout the entire first level -- you know, barrels, the cyborg's natural enemy -- yet you never actually face off with RoboDonkey Kong, which just might have made the trouble worthwhile. In the later, post-apocalyptic levels, RoboCop inexplicably faces off against Terminator dogs. My guess is that Skynet tried a new way to kill John Connor by making him adopt one of these cute but murderous beasts when he was a kid. After all, who could suspect a dog?

Actually, no. I'm not going to try and rationalize all the stupid parts of this game.

Finally, there are the mysterious falling girders. But seeing as those were in the first RoboCop movie, I've no complaint there. 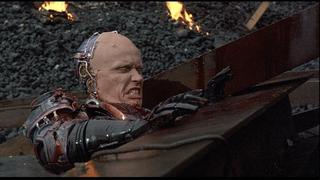 My one weakness! How did you know?!

So the SNES game plays worst than the Genesis version, but at least it has cut scenes. Alas, they're not much help in developing the story. They're styled after comic book pages with panels and dialogue balloons, but ultimately they fail miserably at, you know, telling a story. If you don't know the events of the comic book that inspired this prior to playing the game, don't expect to be illuminated by the cut scenes. The intermission texts are a little more informative, but so what?

Yes, this story is based on the beautifully apocryphal Frank Miller/Walt Simonson comic about RoboCop's mind being the basis of the creation of Skynet. To prevent this, a guy named Flo goes back in time to kill him, but is stopped by three Terminators sent to protect our beloved agent Murphy. Upon learning that these robots from the future had taken control of OCP, RoboCop tries to stop them -- but he also fails, soon finding himself captured and digitized. Years later, when hell breaks loose and Terminators begin conquering the world, RoboCop is able to rebuild himself and fight them once and for all. Kind of like how Mega Man X? is able to defeat all the advanced robots based on his own design, except stupider. 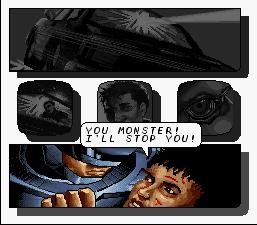 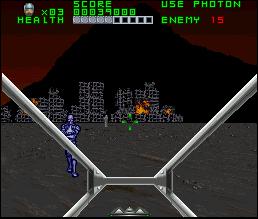 For what is worth, the game has its merits. RoboCop is a nicely drawn and animated 2D sprite that honestly resembles Peter Weller's performance seen in a side-on miniature. Except for the jumping, but whaddya want from a video game? The visual atmosphere is suitably grim and has a satisfying enough cyberpunk feel to it. Also, the SNES version has an exclusive FPS level using the hardware's famous Mode 7 feature. It ain't Half-Life? -- hell, it ain't Doom? -- but it's there.

Unfortunately, all these elements are not enough to make the game worth owning -- or in fact playing, period. The only way to derive any enjoyment from this game is by lending it to someone and savoring how that person suffers. And that only works if you're an awful, sadistic bastard.

Listen to me if you want to live: Don't play this game. 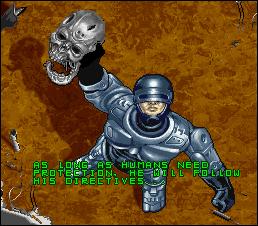 Thank you for your cooperation.