In the not-too-distant-past, Tecmo was known for more than games featuring terrifying, unrealistic breasts attached to doe-eyed automatons who live deep in the Uncanny Valley. The simpler days of this cutting-edge video game company gave the gaming public respawning, ninja-killing birds, super bowls, and monster ranches as far as the eye could see. Tecmo also managed to shove the RPG genre forward into much more dangerous, complex territory  and on the NES of all places.

Radia Senki: Reimeihen (Chronicle of the Radia War) takes the sword-slashing simplicity of Zelda and raises the stakes by adding a very rudimentary RTS system through which the actions of up to four other CPU buddies can be manipulated. You control the named-by-you hero, while commands like "fight to the death" can be issued to your entire team. Magic users can even be told to go hide in the corner, where all good magic users belong.

People wearing the protective equivalent of a bath robe should really know the best place in battle is far, far away, but what are you going to do? 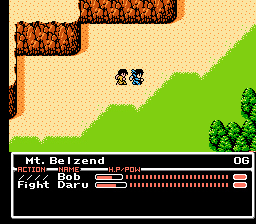 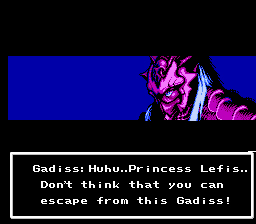 The system could work better, but for the most part it does what it's told; and compared to other AI sidekick adventures like Secret of Mana, Radia has simplicity on its side. Since you have control over your buddies only when whisked away to a separate battle mode, there's no cursing at the TV whenever a little red-headed sprite child gets stuck behind a tree. It's no wonder why the game never came out in America - after all, in 1991, we were still trying to understand the fact that the black background in RPG battles didn't mean we just got sucked into some terrible gaming black hole. Luckily, the game has been translated by people on the Internet, those modern Santa Clauses.

Radia Senki features a very simple form of character customization; you can learn spells, but only four, and the spells you learn are preordained. These spells aren't very interesting, visually or conceptually. Most of them flash a color on the screen, somehow damaging all visible enemies in the process (this would be the appropriate place for a Pokémon? seizure joke...were this the year 1999). The healing spells are the most valuable, and are involved in most the game's MP draining. Radia Senki is nothing but dungeon after dungeon full of monsters, so multiple visits to the HP well are valuable and necessary.

Older RPGs usually don't hold up to the tedium litmus test, a.k.a. "Will random battles put me into some sort of long-term coma?" Make no mistake about it: Radia Senki is guilty of throwing battle after battle at you, yet it never goes into the "Gah! Not again!" territory. It helps that battles aren't just a mindless exercise in jamming on the A button, which was the style at the time. You may only have direct control over the main character, but it's necessary to watch over the others in your crew, since they all have the IQ that the NES is capable of generating, divided by four. 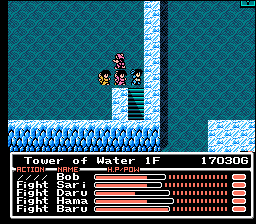 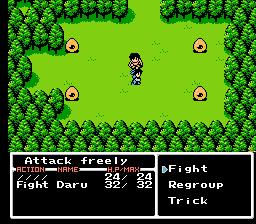 Speaking of your comrades, Radia Senki follows the Final Fantasy IV route of having party members leave, enter, and rejoin your group at a moment's notice. This helps keep things fresh, but it can be a pain if you just stuck some killer weapon on a character and they run off with it like an ungrateful bastard. Though it's important to note that these party departures thankfully never reach the frequency of Kain's fair-weather friendship in FFIV.

As an RPG, Radia Senki: Reimeihen depends entirely on the novelty of its battle system, and for the most part, this method works. The game is shallow by most standards, and the plot goes from charming episodic adventures at the start to pure ridiculousness involving clones by the time you reach the final boss, yet it's still entertaining in this far-distant year of 2007. Is it worth playing? Yes. Will a certain sunglass-wearing, acne-scarred hotshot Japanese game developer-slash-video game message board incarnate make a next-gen sequel boasting new areola-shading technology?

We can only hope not.