It's 4:30 AM, and my clock has suddenly morphed into a fire alarm. No matter how much I'd like to, uh, clock whoever decided to make the default buzzer for these things so godawfully grating, I roll out of bed almost giddily; far too giddy for 4:30 a.m., in fact. Within seconds I'm out of bed and bumbling about my room, desperately feeling for the light switch that was far easier to spot before my six hours of slumber. As my eyes reluctantly adjust to the glare of fluorescent light, the hazy rectangular shape of the Game Boy Pocket on my nightstand slowly comes into view. Even with t-minus two hours to school time, I let all my cares wash away as the land of Koholint welcomes me more warmly than any classroom ever will.

It's difficult to believe the enthusiasm with which I rose out of bed over ten years ago. At the ripe old age of 22, I can hardly get out of bed at 9:30 to start the daily search for post-college employment. But for some reason, at the age of ten and with a new game to play, the inevitable post-lunchtime zombie-like feeling of waking early mattered little in comparison to the fun I could be having notsleeping on the dream-like isle of Koholint. For me, The Legend of Zelda: Link's Awakening brings back memories of a simpler time. A time when videogames were practically life's priority; not just some silly form of escapism from Real World woes. Free of deadlines and papers, relationships and commitments, Link's Awakening takes me back to a place when all that mattered was games. 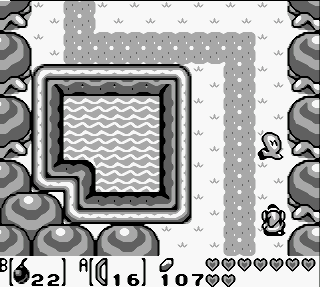 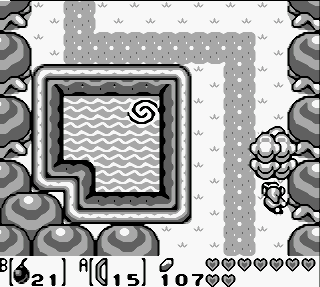 It's a secret to everybody.

Even if it's just a simple piece of Game Boy software at heart, Link's Awakening stands out as a hallmark of many gamers' childhood, not just mine. There's something magical about its simple story, charming characters and tranquil island setting that instantly sends waves of nostalgia rippling many of the most hardened gamers. It's the true definition of a classic: An original title that carefully balanced challenge and fun in a way that remains compelling almost exactly 15 years after its first release. Its timeless nature is all the more impressive considering the whole thing fits in a tiny, four-color Game Boy cart.

Even though other fan favorites like Final Fantasy Adventure? and Metroid II? brought sizable quests to Nintendo's portable, Link's Awakening stands out as one first titles to show how substantial an original handheld adventure could be. Before it, most portable titles were either non-canonical anomalies based on far larger game series (see: Super Mario Land?) or else meaningless cash-ins comprised of a few NES levels scraped together and downsampled (a la MegaManGB). While Metroid II or Super Mario Land 2? might stand out as Nintendo's first attempt to take portable iterations of their "core" series' to the next level, Link's Awakening perfectly articulates the fun and exploration inherent in both its direct console predecessors (LegendofZelda and Zelda: A Link to the Past?). Despite its handheld nature, it manages to be a relatively lengthy, expansive, and engrossing adventure with a self-contained storyline that never takes itself too seriously -- no doubt a significant factor in why it still stands up so well so many years later. 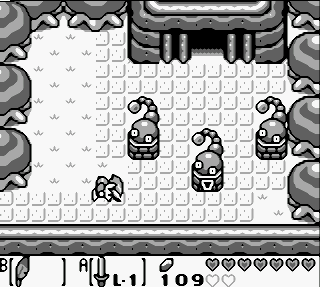 Borrowing the basic framework from Game Boy inventor Gunpei Yokois obscure Japanese tale about a prince and his frog, Links Awakening is in a category unto itself in the Zelda canon. It tactfully skirts past the damnable idea of series continuity by making everything (uh, spoiler alert?) a dream, and a surreal one at that. Borrowing enemies, characters, and countless other objects from other game series' including Kirby, Mario, Zelda, and the aforementioned frog-prince adventure, Kaeru no Tame ni Kane wa Naru, Link's Awakening stands out as a true dreamlike amalgamation of all things Nintendo.

Koholint's was also a world that introduced many never-before-seen elements which would become Zelda standards. It featured the first appearance of the irreplaceable Ocarina, it first allowed the player to use multiple item in combination (like bomb arrows and running jumps), and it introduced other series mainstays such as fetch-quests and fishing minigames. In a time where handheld games were mostly afterthoughts, Links Awakening stood apart not only by innovating but also influencing its console counterparts.

Equally unique to this Zelda adventure is the prevalence of the mute heros love interest, Marin. While every Zelda quest up to this time featured a practically nonexistent princess trapped in some tower or another, Marin bucks the trend by being an independent woman present in the story for the majority of the adventure. Arguably, the highlight of the entire adventure actually includes Marin as Link guides her across Koholint. Although she eventually becomes a pawn in the Wind Fishs master plan, Marin remains an independent and unique contrast to the typical damsel in distress found in almost every Sheik-less adventure. 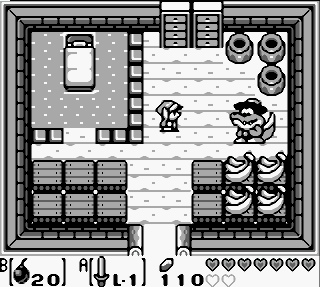 Bananas, Babes, Crocodiles, and Gordos, Link's Awakening has them all.

Even if it did swipe Super Mario Bros. 2?'s "it's all just a dream!" cop-out of an ending, Link's Awakening makes you actually give a damn about that dream -- a remarkable feat of storytelling in an era where game plots appeared to have been written by the first intern a developer could grab... and handheld titles were lucky if they were treated that well. The game's emotional main theme, "The Ballad of the Wind Fish," is a simple and somber tune that plays whenever one of the eight main dungeons is completed, growing in complexity as Link recovers additional instruments. As the tale draws to a close, the tune at last plays in all of its multi-instrumental glory, bringing the adventure full circle.

Yet this victory not as triumphant a feeling as reaching the "end boss" in many other games. Instead of feeling pumped at the prospect of blasting the Wind Fish out of his shell, the player instead feels a touch of melancholy as the adventure draws to its close, because when the story ends so too do Koholint and all its wonderful inhabitants. If you let it, Links Awakening is a game that will bring a tear to your eye, and to this day its ballad continues to send a chill down my spine. 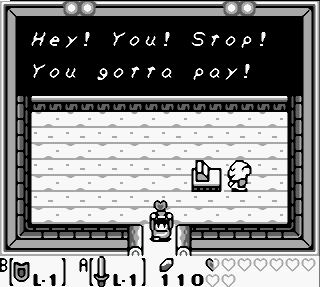 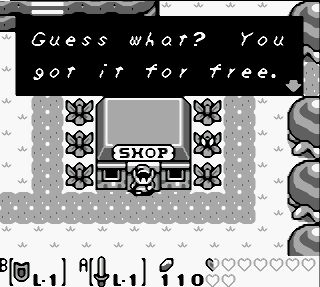 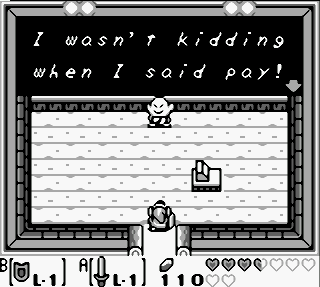 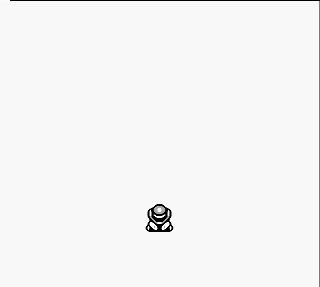 The Adventures of THIEF.

Sappy sentiments aside, Link's Awakening remains a title worthy of its "classic" designation. Its a game that innovated, challenged, and still remains fresh and fun a decade and a half later. Thanks to the upgraded Game Boy Color version, even sticklers for color have no excuse not to experiences its subtle grandeur. While subsequent Zelda adventures have built upon its legacy, changing certain things for better and for worse, Link's Awakening remains one of the most influential and underrated games in the Zelda canon.

Back to GameSpite Issue 8