Even for Nintendo fans, the Game Boy seemed to come almost from nowhere. Certainly it blindsided Sony's management, if we're to believe that urban legend about Sony's president throwing a boardroom tantrum when he heard that Nintendo was releasing a compact portable system with a name suspiciously similar to "Walkman." But nothing in the medium's history has ever been forged in a vacuum, and Game Boy is no different. Nintendo's creation was the progeny of years of planning, experience, precedent, and examples.

Portable gaming was well established by 1989. Mattel had introduced a line of LCD handhelds with interchangeable cartridges a good decade prior in the form of Microvision. Granted, Microvision was less than impressive despite its innovations, possessing a meager 16x16 pixel resolution -- not even enough for a proper game of Tetris -- and fragile hardware that didn't hold up well to the abuses of portability. A few years later, Epoch released a considerably more robust device called the Pocket Computer, which hit a little nearer the mark but still failed to fulfill the requirements of successful portable gaming. The truth is that the ergonomic needs and necessities of handheld systems are something that few manufacturers really grasped; Nintendo's skill in predicting them so effectively was a crucial aspect of Game Boy's success.

Admittedly, Nintendo's design for the system wasn't precisely predictive. The company had accrued plenty of experience with handheld games over the course of the '80s thanks to the Game & Watch series, a line whose lessons were invested into Game Boy. It was only natural for Game Boy and Game & Watch to share so much engineering DNA in common, as both were the children of the same father: Gumpei Yokoi, then head of Nintendo's R&D1 division. Yokoi had always enjoyed making gadgets, and Game & Watch was the result of him applying his talents to the primitive LED sports games of the '70s.

The Game & Watch series steadily evolved throughout its lifetime, with new refinements and innovations improving on the design of earlier releases. Here we see perhaps the first instance of Yokoi finding strength in shortcomings. Game & Watch units were limited by nature, each one featuring only a single game, its gameplay iterations in turn constrained by the predefined shapes burned into the unit's screen. A Mario's Cement Factory unit could only ever play Mario's Cement Factory, because the cement factory itself was silkscreened on device's surface while a finite number of possible Mario shapes were preset in the LCD. At the same time, the limited nature of the machines made them cheap and plentiful, which gave Yokoi and his designers the freedom to make iterative changes as they learned from their successes and failings. The earliest Game & Watch systems were controlled with a pair of buttons, similar to Space Invaders arcade cabinets; later came four directional buttons in a cross formation; and in time, this evolved into the classic D-pad which became a permanent fixture of all home consoles. 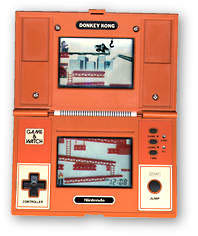 Game Boy was simply the next step of Game & Watch's evolution. It was an effort to liberate the games from hardware by adopting the interchangeable cartridges of the Microvision. While hardly a revolution on that front, the Game Boy was remarkable for integrating the lessons learned from Game & Watch with concepts that others had tried and failed to make good on.

Game Boy benefitted greatly from perfect timing, too: it was released into a market that had been bolstered into tens of millions by the incredible success of the NES and eagerly accepted the prospect of more Nintendo. Luck was a factor as well. Had things gone a little differently for Nintendo's competition, Game Boy could have easily entered the world with the stigma of being too little, too late. Long before Nintendo began hinting at its portable gaming ambitions, developer Epyx -- famous for its staunch support of Atari and Commodore -- decided to throw its hat into the console arena with a platform it called Handy. The system was nothing short of incredible: where the Game Boy offered four shades of grey on a passive-matrix, unlit screen powered by a processor based on the dated Z80, Lynx offered a full-color, backlit, active-matrix system, powered by a processor on par with that of the NES and a 16-bit graphics coprocessor, putting it on the level of the TurboGrafx 16. Astonishingly enough, Lynx development began way back in 1986, when the NES was still establishing a foothold in the U.S.

Ultimately, tiny Epyx lacked the resources to produce such a beefy system on its own and was forced to team up with Atari to make the system a reality. Atari, demonstrating the gross incompetence that characterized the company in the post-crash era under Jack Tramiel, seemingly did everything it could to ensure the Handy -- now called Lynx -- would be an utter failure. Had Epyx been able to go it alone, the Lynx likely would have launched in 1987, establishing a standard for portable games that Game Boy would have been forced to compete against. Instead, the system didn't launch until a few months after Game Boy... and even then, Atari constantly undermined Epyx, ultimately driving the Lynx's inventors out of business with onerous demands and underhanded dealings.

Practically unchallenged at its debut, Game Boy was just machine enough to run scaled-down versions of world-class franchises like Mario, Castlevania, and Teenage Mutant Ninja Turtles?, all at a compelling price. The system was an instant hit.

Image from Game and Watch