The Super Nintendo was a RPG powerhouse, home to several genre classics as well as what many consider to be Square's best games; Secret of Mana, Chrono Trigger? and a trio of Final Fantasys. Unsurprisingly, Nintendo's banishment from the resplendent garden of Square was a very sore point amongst the Nintendo faithful for a very long time. In a way, it presaged Nintendo's fall from grace. Sony hoarded its exclusive Square games and proceeded to reign supreme for two console generations. The N64-- instead offered Gouraud-shaded monstrosities; its successor, the GameCube, looked to continue its RPG-free tradition -- to say nothing of RPGs of the highly-coveted Square variety.

A scrappy and well-respected underdog during the N64 era, Nintendo's second-place dominance was challenged by Microsoft in the subsequent generation. Unlike Nintendo's former competition, Gates et al were unlikely to punk out and subsist on atrocious Sonic games. At the same time, Nintendo actually took time to learn from its mistakes and openly courted developers, quite the change from its former policy of alienating them at every opportunity with a haughty, cavalier attitude. The incorrigible Hiroshi Yamauchi, former Nintendo president, once quipped that people who play RPGs are "depressed gamers who like to sit alone in their dark rooms and play slow games." An apt and observant comment, but not exactly sweetening the deal for Square, who was now making billions working with Sony. Making RPGs. This was akin to Pierre Trudeau's famous "Just watch me" line during the FLQ crisis. And Square hadn't even killed anyone. 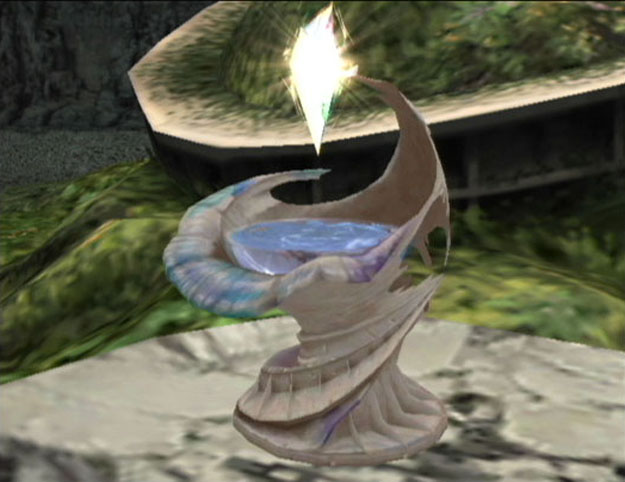 The 'bucket' is the source of all your woe...

That being said, 2002's announcement of a new GameCube-exclusive Final Fantasy set the hearts of Nintendo fans aflutter. Many expected a return to the style that made these games legendary to begin with -- that is to say, they they expected something on par with Final Fantasy IV and VI. Or at least Super Mario RPG?, Culex be damned. Before long, though, news broke that the game would be a multi-player real-time action-RPG.

The gameplay wasn't the only thing that would be different in this new RPG; the art had moved in a new direction as well. The graphics were 3D but bore a super-deformed style, similar to the classic sprite-based games: Neither as dour as VII nor VIII, nor as plastic and horrifyingly troll-like as IX? nor as, uh, "loud" as X? and X-2. The art direction was headed by Toshiyuki Itahana of FFIX fame, but the art seemed to take on a Akihiko Yoshida-esque quality, the characters somewhat resembling the portraits in the Tactics''' series. This, coupled with the fact that the GameCube was the unsung graphical powerhouse of the last generation, spelled A-W-E-S-O-M-E for gamers. 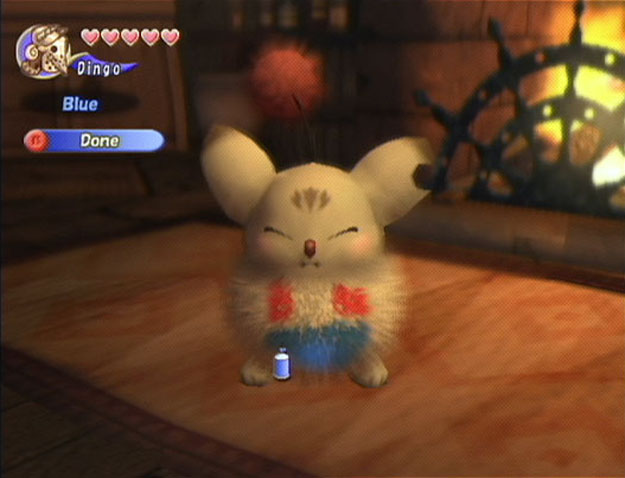 Play magazine's review rated Final Fantasy: Crystal Chronicles a perfect 100, stating: "The combination of the action, high adventure, quaint bustling towns and villages, Moogle Wisdom (like the Yodas they are), and the best Square soundtrack since the SNES days add up to the most immersive overall universe I've experienced on the GameCube, if not on any next-gen console." Surely no one expects anything less than high hyperbole from Play magazine, but the gaming media seemed to back this up with above average scores. The average on Metacritic.com is 80%.

These generous scores are very confounding indeed given that Crystal Chronicles is essentially broken. Despite the great artwork, the superior graphics, the charming fairytale style, and the catchy Celtic-themed music, the game plays more poorly than Barry Bonds minus the muscle juice. Several design choices in particular cripple the gameplay.

The first and most obvious problem is the implementation of the much-vaunted multi-player gameplay. While you're playing the game solo, the regular controller is fine. But once your friends arrive to make use of the crucial co-op gameplay, everyone needs both a GBA and a link cable. For those of you arriving late to our fandom, GameCube-to-GBA connectivity was a total debacle that Nintendo actually had the chutzpah call an innovative next-gen feature. Few titles used it in any decent way (Wind Waker?'s Tingle Tuner was one of the more benign efforts), but Crystal Chronicles actually required it. The result was that everyone had to use their GBAs as a controller, foregoing delicious analog control for janky digital on a microscopic D-pad. Sure, you had that option on the ridiculous GameCube controller as well, but it was there only if you craved pain. 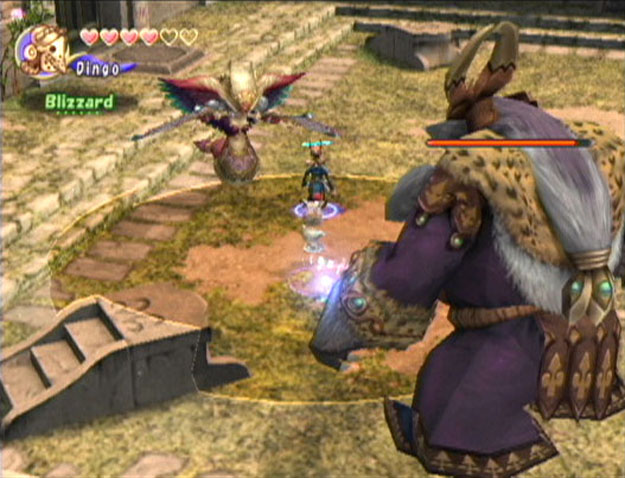 "Bleargh! When our son Edge killed us we never knew that the afterlife would be spent in this mediocre game! I could be alive in Eblan making Rubicante's scones!"

The use of GBA controllers actually brings into harsh light of scrutiny some of its other issues -- issues that might have gone unnoticed had the game simply used regular controllers. The entire rationale behind the GBA connectivity requirement was that it would allow individual players to operate independently from one another and in private. For instance, each player is given a secret objective at the beginning of each stage which will earn them an extra reward if completed. Shops display their inventory on the GBA screen, and when you change equipment you can do so at anytime, ostensibly without holding up the party. While these mechanics work well enough in Four Swords Adventures?, being required to use them in Crystal Chronicles is like being forced to eat with your feet.

Due to the gameplay contrivance that is the Chalice, the party has to stay in close proximity to one another. Stepping outside the Chalice's effective area results in having your hit points sapped. So...given that changing your equipment makes you briefly immobile, in practice, everyone has to stick close as you swap in order to remain in the bubble. So changing gear inconveniences everyone anyway -- which begs the question of why we need to use the GBA in the first place. If your friends are impatient they can move ahead while you are in menu and you will be dragged forth by the edges off the bubble, but then you will be vulnerable should they drag you into battle unwittingly, as you finish up your business on your GBA screen.

Its enough to make one want to throw a hanafuda card straight into Yamauchi's brain, like a shuriken.

The Chalice, as previously stated, forces the party to remain within a radius that equals half the screen. Being an offline multiplayer game, everyone is sharing a single screen, so this additional constraint is simply another exasperation piled atop the rest. To make matters lamer, one player must carry the Chalice at all times. The designated carrier cannot attack or pick up items, which either kills the party's forward momentum or forces the carrier to go without. The civilized thing to do is swap off from time to time, but that's just another pace-killing nuisance. The Chalice carrier does get to direct traffic, but unfortunately walks at half the speed as the unencumbered party members, so really, the Chalice carrier has to be reactive to the movements of the party.

As if the Chalice hadn't already done enough to destroy the game, it also works to restrict your movement on the world map as well. The story of the game is about how a poisonous cloud, Miasma, covers the world (much like in Final Fantasy IX). The Chalice allows for safe travel in these areas but also must be filled with three droplets of myrrh every year in order to stave off the Miasma and save the world. The Chalice also gets imbued with elemental properties. These are changed by visiting the fountains across the world map and within stages, and are denoted by the colour of your bubble. This also boosts elemental defense. But in order to cross into other continents you need to traverse the Miasma streams, without the proper element imbued in your Chalice you're an instant persona non grata.

The aforementioned fountains will allow you to change the elemental properties of the Chalice, but often you will get barricaded between two Miasma streams and none of the fountains on hand will be of the element you need to cross. This effectively makes you replay an already completed stage to collect another drop of myrrh, provided that enough time has passed since last you passed the stage and the tree once again has myrrh. The game forces you to replay for its gameplay contrivance and can be quite frustrating when all you want to do is move on. Granted, the stage will now be in "Cycle 2" -- be more difficult and drop better and rarer artifacts -- but it hardly seems worth the effort. 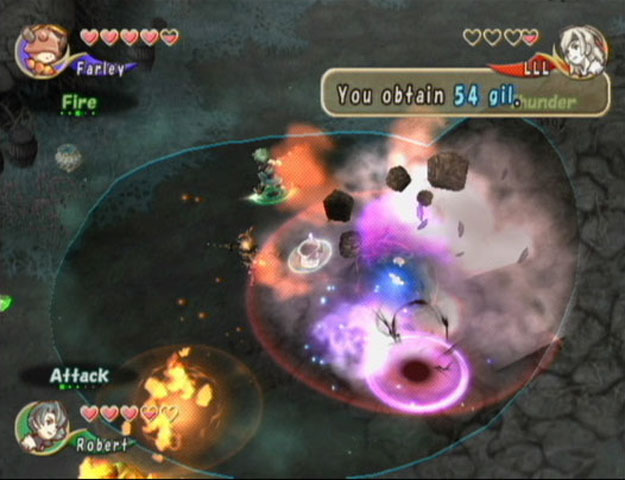 I don't know what the exchange rate is right now from Gil to dollars, but I spent like a gabillion to get this game and a stack of GBAs and link cables to play with my friends...

Replaying stages can be be a fruitless endeavor as well; fighting affords you no experience and the bulk of the abilities you gain in a stage are lost when the stage is completed. So like modern Mana games, you get no experience through continued playing, which sort defeats the primary gameplay conceit of RPGs as a genre. At the end of the stage you get to keep one of your items that you have found -- an extra slot for magic, or a rare item to make new weapons or armour, but the bulk is returned to whence it came, forcing the player into an introspective nightmare and other preponderances of the futility of life and struggle. Sure, Crystal Chronicles is not a straight-up RPG, but it's not a very good action game, either. In fact, by these standards, Devil May Cry is both a better RPG and action game. Hell, it's even a better multiplayer game, despite being single-player only.

So the game is obnoxiously paced, it forces you into replaying old stages for no real reward, you play multiplayer with a frickin' handheld for no other reason than Nintendo's Unicron-sized hubris, and at its core, gameplay is mediocre at best. On the plus side, though, the graphics are great, the characters are charming, and the boss of Moschet Manor is a redux of the King and Queen of Eblan from FFIV. So it's not a total abortion, right?