We live in a mysterious, disgusting world. While humanity's many scientific advancements seem to have shed a piercing light upon every dark corner, under every rock and pebble, beneath every skirt, in truth new species are discovered daily. Travel to any rainforest and you won't be able to take two steps without crushing something that's never before been crushed by human feet.

It seems that the more we explore, the more new things we discover. We're collectively like a dumb, ugly person who is just intelligent enough to know that they're dumb and ugly and feel bad about it. As a result, cryptozoologists -- those Indiana Joneses of the animal world -- are able to justify their constant search for cryptids like Bigfoot, the Loch Ness monster, and the Jersey Devil.

We at GameSpite (GameSpittles, as we like to be called) don't like leaving the house; we find sunlight and nature disagreeable and offensive. Due to our bashful bladders, we never journey more than fifteen feet from indoor plumbing. If pressed to urinate in the company of others, we will simply wait until we explode in a glorious shower of gold and red. Even so, the crypto-pioneering spirit burns brightly within us, and we have turned our search toward the one territory that others have not: The land of video games.

The first cryptid to fall under the cold beam of our flashlights -- or "torches," as we cryptos call 'em -- is the Japanese Tsuchinoko. Snake-like in appearance, the Tsuchinoko is fascinating because it reportedly has a body much fatter than any typical, self-respecting Japanese snake would ever be seen to possess. It's understandable to let yourself go a bit, whether due to depression or the harsh, relentless pull of gravity, but you've gotta have some kind of self-respect. The Tsuchinoko surely must realize that basic truism, which goes a long way toward explaining its scarcity.

But as everyone knows, you can either be very stealthy or very fat, but never both. Unsurprisingly, the chubby Tsuchinoko has failed at stealth quite often, having been sighted in several videogames. The earliest of these sightings occurring back in the '60s in the world of Metal Gear Solid 3: Snake Eater.

As eyewitness John "Big Boss" Doe says in his cookbook-cum-autobiography, Crap I Ate, Places I Crapped:

"So there I was in the middle of the Russian jungle. The fate of the free world and the outcome of the Cold War itself rested in my hands. I can't exactly say why I thought it would be important to lay down fourteen mousetraps in a clearing, but that's what I did. Maybe it was the isolation, maybe it was the pressure. Or maybe it was the poisoned dart some guy had just shot at me, I don't know.

"Well, OK, the dart didn't so much 'hit me' as embed itself into a tree beside me, from which I later liberated it. I've always been one to give a hoot, and I think you'll find that many people who have known me will back me up on this. As a result of this hoot-giving, I try not to pollute. So while I was looking for a trashcan to drop the dart into, I tripped on a tree frog. That's the way it was in the jungle. Some days you go through the rain, some days you trip on a tree frog.

"Through some happy accident, the dart landed directly in my arm right in the area that we in the, uh, sneaking business refer to as 'the sweet spot.' It was only a matter of seconds before my mind was swimming with the funky toxins of the Brazilian Awesome Spider, and I just thought it would be really awesome to start laying down traps. Maybe I could catch a rainbow." 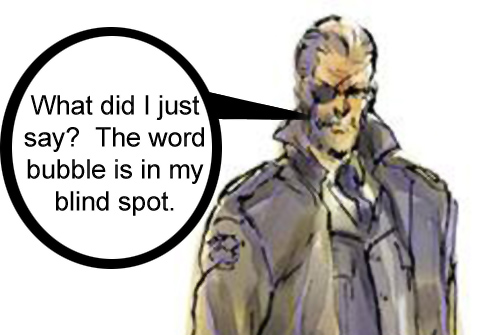 Photo of Big Boss taken during one of his many tragic (yet hilarious) drug freak-outs.

"I came to about four, maybe seventeen hours later -- it's hard to tell in Russia. Did you know water flows backwards there? It's true! -- and I decided to check my traps. And wouldn't you know? Wiggling and squirming in the center of the clearing is something that could only have been the Tsuchinoko! I didn't know that at the time, of course, but when I described it to Major Zero (he was my ops commander, you understand), sure enough, he says I've got myself a Tsuchinoko and I can't eat it, I have to bring it back to the States for study!

"Well, that was just aces with me. The thing was smiling really cheerfully at me and I've found that when something finds the prospect of being eaten funny, it's usually the kind of something that'll give you all kinds of gastrointestinal hilarity. So my mind was pretty made up, but wouldn't you know? Three hours later and I'm climbing up a really long ladder. You've never seen a ladder so long. And when I got to the top, I collapsed on the ground and happened to fall on top of four more toxin-coated arrows that I had picked up in the interest of preserving the environment.

"Yeah, you know how that goes. I started getting a real craving for something whimsical, so yeah, I ate it. I ate it and it was delicious. Caught hell from the Major, of course. He told me I'd done a horrible thing; destroyed a miracle. He said it was the same as wiping out the unicorn.

"You know something? If I had found a unicorn out there, I'd have probably eaten that, too."

Chilling. But this was only the first of many sightings! The Tsuchinoko would later make a cameo in Siren?, swimming in a bathtub full of blood and jumping several feet in the air to reach a drain pipe. It went mostly unreported as every eyewitness was either killed, horribly mutated, or never heard from again. Compared to everything else that was going on in the village of Hanuda at the time, a portly snake is hardly worth mentioning. One by one, the simple peasants were changed into bloodthirsty zombies, killing and eating those few who are unaffected. The entire incident was later revealed to be the work of an extraterrestrial entity known as Datatsushi, which we believe means "space fish" or something. Look, we aren't sure. This is about investigating rare and mythic animals, not researching words. You find us a better word, a word that terrorizes farmers and feeds on dog placentas, and then we'll talk. Does that satisfy you, Dictionary Brown? That do it for you, Miriam or Webster or whatever you want to call yourself? You're the word guy, after all. 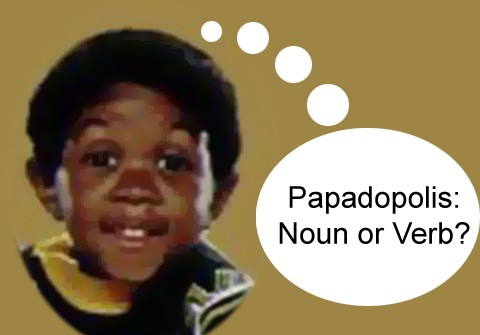 Webster, creator of the first dictionary. Not pictured: Miriam.

Most recently, this cryptid has appeared in Castlevania: Aria of Sorrow?. When its soul is consumed (however it is that Soma Cruz consumes souls -- we're afraid to ask), the friendly shopkeeper Hammer will offer his wares at a discount, no questions asked. When you're delicious and you know it, it shows. Other people can sense it. If you only eat one soul this year, and if you can find it, make it the Tsuchinoko's soul. It'll pay for itself in no time.

The best thing about discovering a new species is being the first to kill it.

Finally, at the insistence of GameSpite's Tomm Guycot, we also interviewed respected Big Boss impersonator and Contra?'s own Player 1, Bill Rizer. In his usual blunt manner, Rizer had this to say:

"Tsuchinoko? Sure, I seen a couple. Probably shot a couple, too. I shoot lots of things. I'm kind of curious why I haven't shot you yet."

This interviewer then went to shake Mr. Rizer's hand, killing the super soldier upon contact.