If you learn only one lesson from Crackdown, let it be this: Good game design and fun game design are not necessarily one and the same.

This is a terrible secret that we in the press are trying to hide from the gaming public, what with our dogged efforts to assign simple numeric scores to games which have become complex productions that appeal to different people on many different levels. (Admittedly, complex numeric scores are even worse -- what's the difference between an 8.8 and an 8.9, besides the volume of death threats you receive from Internet retards?) But Crackdown has revealed our shameful sham, and now we're all going to be out of jobs. Screw you, Real-Time Worlds. Screw you so hard. What did we ever do to you?

Crackdown isn't the most carefully-designed game you'll ever play. In fact, it's riddled with flaws. The missions are boring ("kill the boss" times twenty), the camera is insanely terrible, the graphics try to be cartoony and realistic at the same time and end up a mess, and the whole thing is a constant letdown because of its open-ended "do anything" design -- namely in the fact that it makes all the things you can't do stand out in sharp relief.

But that's just nitpicking. Complaining about Crackdown is like watching a ninja do a handlebar-stand as he jumps the Grand Canyon on a flaming motorcycle, then complaining because it wasn't your favorite brand of motorcyle. In other words, it makes you a jerk. And no one likes a jerk. 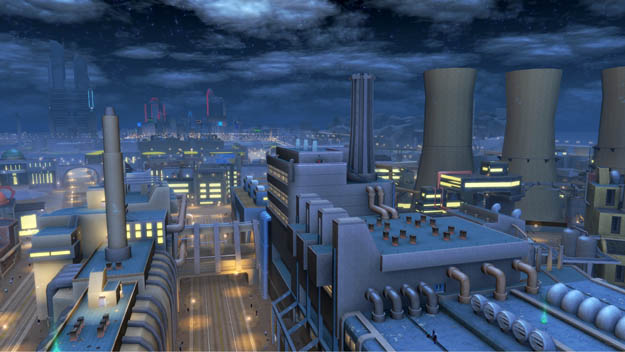 The world is your awkwardly cel-shaded oyster.

Basically, the idea behind Crackdown is this: GTA creator David Jones bailed from Rockstar North and decided to have another go at the "explosive sandbox" genre. So he stripped out all the crap that makes GTA increasingly less fun with each stale new iteration -- suffocating mission structure, horrible controls, fussy flight requirements, overwrought story, the endless stream of juvenile "satire" -- and decided to replace said crap with things that are objectively, scientifically proven to be awesome. Namely, comic book physics and parkour.

The result is a game where you play as a genetically enhanced police agent capable of crushing your opposition like bugs. You leap up the side of buildings, across rooftops, constantly enhancing your skills so you can do an even better job of it. You're no helpeless babe when you start, but by the end of the game you're basically a force of nature, moving about the city by using skyscrapers as footholds.

And that, that is awesome. 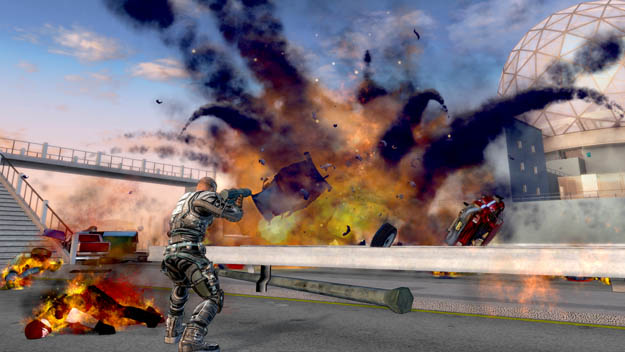 This is pretty much the game in a nutshell, except later the explosions get bigger.

Crackdown is startlingly open-ended -- all told, there are almost two dozen missions which can be completed in any order, and you can go anywhere you can jump to. By the end of the game, that's literally everywhere; the only place I can't actually seem to reach are the tops of the big industrial smokestacks. Even the mountainous parts that in every other game ever designed would repel you for trying to scale them yield to an agent with high-level agility, making it possible to approach your objectives from literally any direction.

Really, the only limitations come down to what the controls allow you to do. You can toss cars at bad guys, you can toss bad guys at cars, you can base jump from a 500-meter building, you can use enemy weapons against them, you can drive a truck into a nest of gang members before blowing it (and them) up with a bazooka. But you can't swing corpses like clubs, you can't hop on a buddy's shoulders for a boost, and you can't really do anything that doesn't involve blowing up things real good. And that's a little bit of a letdown; one of the few things GTA still does right is give you lots of non-shooting missions, including pizza delivery.

Still, within the limits, there's a delicious amount of freedom to be wrought. You can even go after the toughest bosses right from the starting gate, although you'll almost certainly die. That's because the gang kingpins are propped up by their followers, and taking out those underlings has an actual impact on the effectiveness of the kingpin's defenses. Wipe out a gang's main gun-runner and you'll find their bosses' bodyguards no longer have access to the top guns; take down the intelligence coordinator and the hit squads will have a harder time tracking you down as you roam Pacific City.

It's quite the impressively designed ecosystem. The main character of a sandbox game is really the world itself, and while Crackdown doesn't quite achieve San Andreas' immense scope it does a lot more with the limited space. There are no areas of empty filler to be found; every nook, every corner of the game has a purpose. The lowest crevices house Hidden Orbs, the highest peaks lure you with Agility Orbs, shining in the night with the allure of knowing that if you can find a way to get up there and grab that orb, somehow, you'll boost your agility rating, which means you'll be able to ascend to even greater heights. And from there you can snipe enemy gangs, fling grenades into their midst, wipe out entire squadrons with a missile, or, if you prefer subtlety, a carefully-placed bullet to the gas tank.

Where Real-Time Worlds totally and completely succeeds with Crackdown is in their ability to draw gamers progressively into the world. The stick-and-carrot of the orbs is one way, but at the beginning of the game you'll also need to liberate "supply points," which are basically spawn points. By luring you into every corner of the city with promises of greater power and options yielded by thorough exploration, players are encouraged to observe the detailed NPC behavior, pay attention to the realistically-designed freeway system, study the best footholds for climbing buildings, and eventually uncover all there is to see -- all without feeling forced or compulsory.

Of course, once you kill all the bosses and uncover all the orbs and complete all the races, there's not much to do. Which is why you start up a new game, going after Achievements and taking different routes and using different tactics and tackling higher difficulty levels. Oh, and there's also the matter of online co-op. And upcoming downloadable content. In short, Crackdown wisely skips trying to be epic or telling a grand story in favor of old-school fun, that NES game mentality that made you finish up a two-hour game and start all over again. This time, however, you can have a friend in Pawtucket join in the second time around. There's no controller-swapping required, just sweet mutual mayhem. Or murder. Depends on your misanthropy. 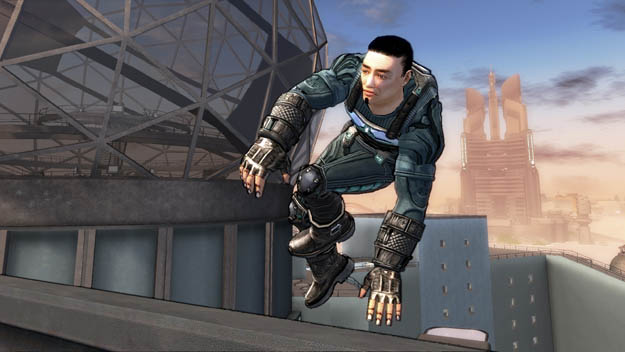 Real-Time Worlds is an equal-opportunity offender: Every race is equally stereotyped, and your agent's "skin" can be changed to prove that every race has an equal capacity to become violently mindless lackeys for a fascist police state.

And there's plenty of misanthropy to go around. At one point I took down a crime boss in her mountain cave overlooking a highway, then tossed her mortal husk onto the road. Cars swerved at high speeds to avoid it, resulting in a brutal traffic pile-up that prompted a number of police and gang members caught in the wreckage to begin taking potshots at each other until the whole thing exploded in a horrifying conflagration. Later, I discovered that firing a missile with a thirty-foot blast radius into a crowd of angry gang members on a crowded street resulted in more benefits from bad guys wasted than penalties from civilians murdered by the splash effect. Sometimes, I suppose, justice is blind.

It also shares one of the more unfortunate elements of GTA's legacy, the unavoidable sensation that you are playing a game made for young white males. The bad guys are the usual collection of immigrants -- Mexican, Russian and Chinese -- so the plot plays out a little bit like a mean-spirited fever dream by one of those dudes who wants to build a wall between Texas and Mexico. And of course the usual vagina dentata themes are out in full force, all the more blatant for the game's sparse narrative: with few exceptions, the female criminals have risen to power by using their sexuality, usually followed by a quick betrayal. Remember, boys, girls are scary and they only want to hurt you! With their genitals!

In other words, it's not a very nice game, but at least it's a very interesting game. So squint a bit and maybe you won't notice the subtext.

But whatever. Video games need to grow the hell up, but Crackdown clearly isn't the game to do it. This is a game in which you can throw cars off of skyscrapers and parkour fatally onto bad guys' heads. (Fatally for them, I mean.) It isn't meant to be grown up. It's a big, stupid, wonderful, dumb, ridiculous, amazing game that doesn't even pretend to take itself seriously. How do you even put a number on that? You don't. One a scale of one to ten, Crackdown is a "HOLY CRAP."