Breath of Fire IV has the dubious distinction of being (to date) the final "traditional" entry in the series, although Capcom has a mobile spin-off based on this chapter in the works, presumably only for Japanese release. For whatever that's worth; based on Capcom's previous mobile spin-offs, probably not a hell of a lot. Fittingly for its tried-and-true design, BoFIV is perhaps truest to its heritage -- that is, Breath of Fire I -- than its immediate predecessors, at least in terms of gameplay mechanics. It also suffers from a bit of multiple personality disorder, which in its own way just makes it that much more faithful to its roots.

The visuals, of course, are more like the third game: a mix of hand-drawn sprites and real-time polygonal backgrounds. Neither sprites nor environments were precisely cutting-edge at the time, but they were at least an improvement over Breath of Fire III's visuals. Arguably. It's all still awfully jaggy, like any PlayStation game involving actual 3D, but the softer art style made it rather less eye-bleeding than BoFIII. Dated as the backgrounds are, though, the spritework is easily Capcom's best-looking work on the PlayStation outside of its arcade fighter conversions, and one need look no further than the party's incredibly fluid animation both in and out of battle for proof. The monsters don't look too shabby, either.

The world map has been simplified even further in this iteration, taking a page straight out of Yasumi Matsunos playbook with a path-and-dot map system like in Tactics Ogre or Final Fantasy Tactics?. Youll still see the occasional "!" and "?" pop-ups over Ryu's head for secret spots on the world map, but beyond that, the game doesn't offer much exploration this time around.

"!" is also the proper reaction to BoF4's field maps, which tend toward the dull, the drab, and the uninspired. Making things worse is the horror of the camera inflicted upon gamers this time around. The "no fake 360-degree cameras allowed" memo was in fairly wide circulation by 2000, so this camera -- which usually only rotates in ninety-degree chunks and has all the vertical inclination of an obese hamster -- mainly serves to make running around and, you know, accomplishing things needlessly difficult. 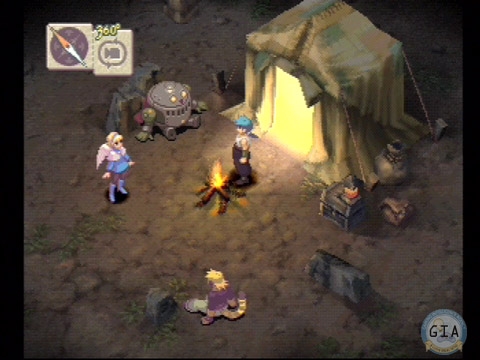 Camping makes a cheap alternative to inns, and is handy for skill management to boot.

As in the last outing, everyone is gifted with his or her own field action, whether it's Ryu's sword-swinging or Nina's almost useless flight. These abilities manly serve to get through several of the mini-games, though, rather than anything actually useful. BoFIII's most questionable "innovation" was its annoying mandatory mini-games, which have about as much in common with WarioWare as painting a with a roller brush does with Picasso. BoFIV unhappily crams even more one-shot exercises in frustration and irritation down the player's throat, Capcom having apparently forgotten that the essential part of "mindless entertainment" is the "entertainment," not the "mindless." Also back for an encore are fishing and the faerie village, which are largely the same as in BoFIII but with a pastel finish.

And BoFIII looms large in other ways, too, like the storyline: one part badass, three parts Breath of Fire III Redux. Sadly, the game mostly fails to deliver on the badass part -- in fact, the Ryu crew ends up killing the only cool character in the game, which is pretty much the worst thing that could have happened. (OK, Ursula's also a decent character, pants-dropping episode aside. But still.) 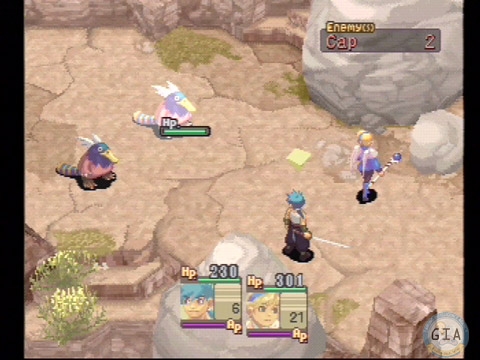 Ah, combat. It's actually pretty fun this time around.

At least the gameplay delivers, for the most part. BoFIV's battle system is essentially an refinement of Breath of Fire I's combat: turn-based, with excellent feedback on enemy health. Sure, it's still just three characters in a battle party, but the active team can be swapped on the fly from the reserve team -- a trick copied wholesale a year later by Final Fantasy X?. Combo and support attacks are added to the mix, and they're exactly what they sound like. Support attacks allow the rear-line members to take potshots at the enemy, occasionally. Emphasis on "occasionally." Combos allow the party to add up extra damage and unleash special attacks. It's regulated by a gauge divided into three parts: a damage counter, a combo counter, and an elemental symbol. Certain special attacks may be unleashed by fulfilling several conditions with the combo gauge, and which comes in handy in a pinch.

Ryu can, as always, transform into a dragon -- but this time around, this is an ability unique to him. BoFIV abandons its predecessor's gene system, instead offering a short list of dragon forms that you generally learn from squirreled-away items. They still kick plenty of ass, but they work differently than usual. Rather than going straight to dragon form, Ryu transforms into a demi-dragon, and his breath attacks play out like Final Fantasy summons. Tracking these down is where BoFIV's not-so-optional MacGuffin-hunting comes into play, and the extra effort is mandatory if you want full use of the Kaiser transformation...or the real ending. Jaggy 3D visuals aside, these are largely useful -- happily worth the amount of time required for finding them.

The master system also makes a return, with a few cameos and a number of nods to previous Breath of Fire titles. Masters are much friendlier to use this time around -- while in camp mode off the world screen, you can access a list of available masters and who's training with them, as well on info on when each master's next few skills will be learned. You can still transfer skills with the aid of rarish and expensive items, and you still can learn some skills from monsters by using the defend command in battle. It's a useful, if time-consuming endeavor, although it's still frustratingly tied to your level-ups. And good luck meeting some of the masters' teaching requirements. 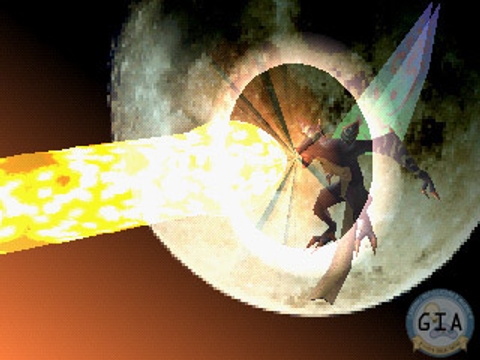 The music take an interesting turn, with a distinct Middle Eastern vibe and lots of woodwinds and string. It lends the game a different feel from most JRPGs -- and a much better feel than BoFIII's ill-fitting acid jazz. Though maybe not quite perfect, as certain songs are repetitive enough to grate on the nerves in short order. (I'm looking at you, Imperial battle music.) Oddly, the game's light on the sound effects, with the battles featuring most of the sound work and only a few atmospheric or field map effects to be heard. The Japanese-language voice-overs were retained for attacks in the English version, which likely pleased the Japanophiles and confused everyone else. This was part of Capcom's brief experiment in listening to a small but rabid section of its fanbase, though nowhere near as disastrous an experiment as Mega Man X6.

In short, Breath of Fire IV isn't a bad game. It is a mediocre game that could have been better had the development team cut out all the mini-games and padding and done something more interesting than simply retelling the exact same story for the fourth time in a row. The addition of an engaging sub-story with a bittersweet end was a nice touch, but not quite enough. The production values are decent, battles are generally fun, and the only truly irritating element of the main game is that damned camera. It's typical Capcom, in fact: good ideas but somewhat terrible execution, resulting in a game that's mostly playable but not nearly as fun as it could have been.