The year 1998 in gaming can best be summed up by its hat trick of paradigm-shifting, genre-redefining titles: The Legend of Zelda: Ocarina of Time, Metal Gear Solid, and Half-Life?. Each one of these games made major waves in the industry, the ripples of which can still be felt to this day. Yes, it was a great time for gaming, and a great time to be a gamer. But in a year filled with such colossi, games that didn't happen to blow minds and take names were largely ignored for those that did.

Through no fault of its own, Brave Fencer Musashi was released in 1998, the unfortunate year in question. And, despite its notoriety as one of Square's shoddy, non-RPG products, Brave Fencer is a quirky, colorful, and entertaining action RPG -- a distant cousin to Mega Man Legends?, if you will.

(Note: The three games I listed in the introduction are arguably the most important games of 1998. But please argue on your own time.) 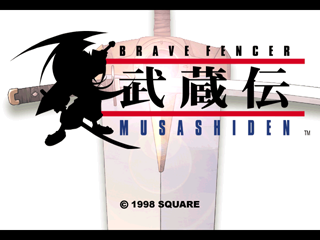 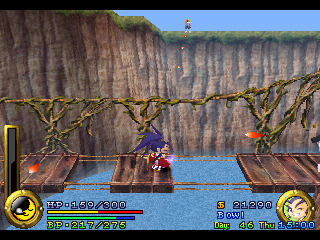 Square's "experimental" period -- roughly 1997 to 2001 -- marked a time when the famous gaming company was independent from Enix; its coffers were bloated with filthy Final Fantasy VII lucre, and not yet raided for the production of Final Fantasy: The Spirits Within. Make no mistake about it; some awful games emerged during this burst of non-Final Fantasy creativity -- but Square somehow managed to craft a few gems along the way. Einhänder?, for example, can only be found through eBay scalpers and is widely regarded as a high-quality game; so why not Musashi? Must it forever be lumped in with stinkers like Ehrgeiz??

Looking at the release of the Brave Fencer Musashi shows that it didn't have much dignity upon its entrance into the marketplace. Saddled with its hipper brother, the Final Fantasy VIII demo, Musashi couldn't help break away from the "lol 50-dollar demo" effect that Zone of the Enders? would suffer from a few years later. You can't really blame Square, as this method of marketing was pure genius when it came to getting the gaming public interested in a product of theirs not branded with "Final Fantasy." It was the best thing they could do short of cramming Cloud Strife somewhere into Musashi's world - though Tetsuya Nomura did create all of the character designs, so I assume that's the next best thing.

Speaking of that particular devil, if Brave Fencer Musashi should be famous for anything, it's the fact that this game marks the only time Tetsuya Nomura's character designs have been restrained, and, yes, even tolerable. Hell, I'll even go as far as saying that Nomura's work on Musashi is appealing and didn't even make me want to throw up once! But this is completely off the record.

So far, I've done nothing but lament Brave Fencer Musashi's obscurity and poor reception. But why, pray tell, should you care about Musashi outside of the pity it deserves? Simply put, Brave Fencer Musashi is the best action RPG on the Playstation. And while there's not much competition for this distinction, Musashi is an admirable, Zeldaish entry into the genre. 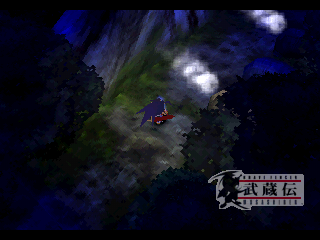 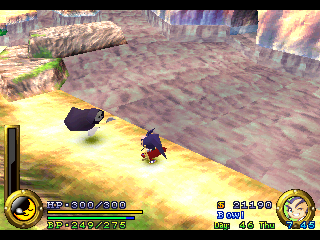 The game begins when an invasion of the Allucaneat Kingdom by the Thirstquencher Empire -- gentlemen, welcome to Wacky Country -- necessitates the reincarnation of the famous samurai Musashi. Unexpectedly, he's brought back to life as a small child, and as with any good Metroidvania title, Musashi must acquire a set of skills that will eventually allow him to explore his environment to the fullest. The rest of the story plays out in a very video-gamey fashion: a series of chapters breaks up the game play into episodic chunks, with Allucaneat's Grillin Village acting as a central hub for Musashi's adventures. And since the game is part RPG, the collection of various elemental emblems -- yes, just like the crystals from the Final Fantasy series -- is mandatory.

Only considering these qualities, Musashi would just be a marginally interesting and thoroughly forgettable game with clunky controls...ah, the early days of PlayStation DualShock support. What separates Musashi from -- oh, let's say an utter turd like Alundra 2? -- is the copious amount of icing slathered on this samurai's adventure. Brave Fencer Musashi is loaded with gameplay quirks, for better or for worse; admittedly, some are just novelties. But nearly every one should evoke at least a response of, "Hm, that's neat."

Musashi is really the Swiss Army knife of samurai. Wielding two swords, he can learn a variety of techniques (after freeing the right people from the clutches of the Thirstquencher Empire, of course): combos, impaling, throwing, and even climbing. Just like Kirby, Musashi can absorb the powers of enemies and use them for himself -- though mostly for the purposes of solving puzzles. And since he's a growing boy, Musashi needs to sleep on occasion. While this may sound like a pain, it's actually a nice feature when the day/night cycle needs to be sped up for the purpose of activating different time-sensitive events. Musashi can even shop at toy store in the game (run by a surly nerd) where action figures of Brave Fencer Musashi's friends and foes (mostly foes) can be purchased. Yes, they go down in value when you open their packages. Even the Japanese realize the almighty power of "mint in box."

Brave Fencer Musashi also has the distinction of being one of the very few games where you can age cheese for the benefit of HP replenishment. Take that as you will. 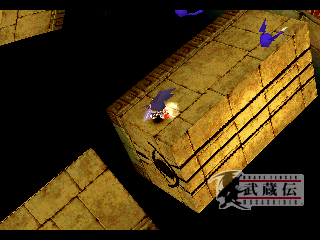 Even though the game is laden with features, its flaws can't be overlooked. As stated before, Brave Fencer Musashi is a distant cousin of Mega Man Legends; because of this, the two happen to share a genetic control disorder. Certain areas such as Steamwood (which puts you on a strict time limit and demands precise movement) can be hair-rippingly frustrating -- and it certainly doesn't help that the game makes you play through this section twice. But the unmatched satisfaction of exploring Musashi's world and eventually opening up all the nooks and crannies makes the creaky parts of the game easy to ignore.

It's a real shame that Square never made a PlayStation 2 sequel to Brave Fencer Musashi, fixing the problems of the original while at the same time giving Musashi and even bigger world to run around in. Wait -- there is a sequel? And it's completely terrible in bold, new areas not tread upon by the original?

Well, that's an even bigger shame.