Come on grab your friends

I’m not really doing this “watching through my Blu-rays in alphabetical order” thing very well, huh? Alien3… Alice in Wonderland… Adventure Time. Well, it’s not like I get paid to be literate or anything. 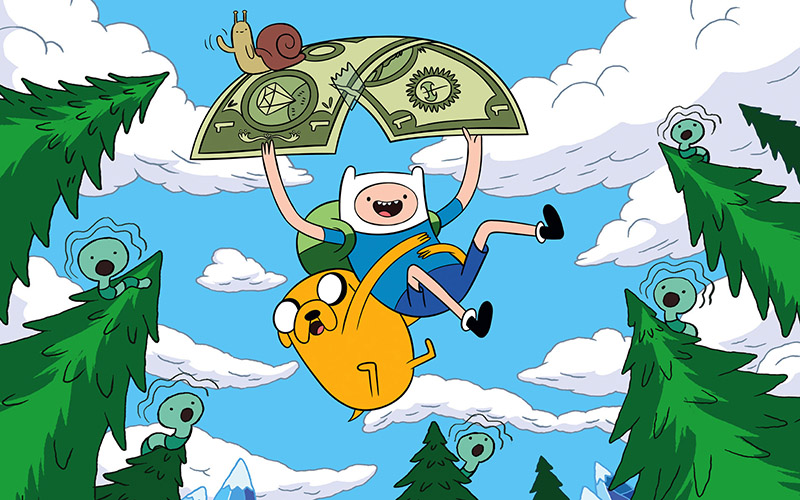 Adventure Time is pretty good. I was intrigued when I played WayForward’s Zelda II clone for 3DS, so I watched a compilation DVD. And that was good enough that I decided to watch the whole darned series.

So, about halfway through the first season, I’m impressed. It’s one of those shows that pretends to be really dumb but is actually quite clever. It really manages to capture the essence of nonsensical childhood imagination while lampooning preachy cartoon conventions and stringing together great jokes. There’s a lot of scatological humor, but it feels authentically child-like — it’s not about Ren & Stimpy-style grossouts but rather the fact that kids find words like “poot” and “butt” endlessly hilarious. I guess it’s kind of a subtle distinction, but it’s disarming where most cartoon scatology is annoying. And for every joke about farting, there’s a chain of smart, off-the-wall jokes — for instance, prankster balloons giving Finn a ride, which frees them from a blood oath and allows them to travel excitedly to the mesosphere where they can joyfully “die at last.”

I also like the fact that they didn’t bother to waste time on any kind of setup or explanation. The first episode in the series could well have been a second-season story, with character relationships already established; there’s no origin story for protagonist Finn until almost halfway through the first season, and that consists of a completely loopy fragment of memory involving his infancy, pooping on a leaf, and a kindly dog family who instilled in him the burning need to help anyone in trouble. Even the closest thing the series has to a villain, the Ice King, already has a long relationship of antagonism with Finn by the time he makes his debut.

I dig the art style, too. It’s incredibly fluid and expressive, eschewing detail for comic freedom and consistent inconsistency.

My first exposure to Adventure Time was at Comic Con a few years ago, sitting at a sidewalk cafe eating dinner. A parade of official AT cosplayers marched past, pounding drums and cheering. Turns out it really was worth the hooplah.

12 thoughts on “Come on grab your friends”