Since public discourse around video games has become a real shitshow these past few days, let’s talk about something else.

I’m currently in the process of trying to lose a bunch of the weight that I had lost a few years back but gained back in the final stressful, frustrating, depressing year of 1UP. Since it worked so well for me last time, I’m spending a lot of time on my elliptical machine. And, as ever, my PlayStation 3 continues to function very rarely as a game machine yet daily as a Blu-ray player. I’m working my way alphabetically through my Blu-ray collection (because, well, why not?); having recently watched 2001, that puts me at the Alien Anthology.

Remember, kids: “Quadrilogy” is not a real word, it’s something Fox made up because they thought you were too stupid to deal with the word tetralogy. 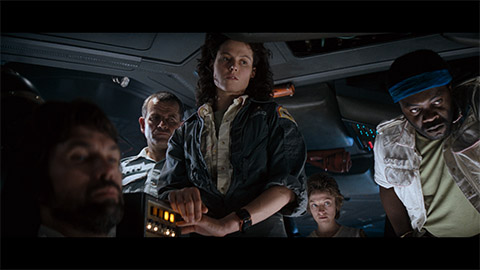 The original Alien has long been one of my favorite movies, and the director’s cut a few years back (unlike the draggy, suspense-destroying Aliens director’s cut) made it even better. I realize most people prefer Aliens to Alien, and that’s fine — it’s a perfect reworking of the original film’s concepts to suit its times. But it also feels more movie-like. Less authentic. Alien feels profoundly real despite its sci-fi premise and sometimes clumsy effects (the HD transfer of the Blu-ray makes it even worse when you can see things like the safety wire on Kane as he tumbles into the egg pit).

Part of what gives Alien its authenticity is Ridley Scott’s insistence on naturalistic dialogue. The dialogue is supposedly partially improvised, and lines overlap and run together and feel like real conversations by people who simultaneously like and hate each other without ever being confusing or leaving the story too ambiguous. It’s an approach I wouldn’t mind seeing more often. Sometimes it’s fun to watch a movie where everyone’s impossibly clever or poetic, like Juno or Moonrise Kingdom — they’re stylized, and that’s great. But I could do with a little more mumbling and visible neuroses, you know?

What really sells the movie, though, is how neatly it combines the aesthetics of the two biggest sci-fi films to have come before it: 2001: A Space Odyssey and Star Wars. Alien is set almost entirely on a single spacecraft, much the way 2001 is, and in certain areas (namely the MU-TH-R computer chamber) it wears the stark, antiseptic look of 2001‘s sets. It also emulates a lot of 2001‘s almost procedural approach to treating the “science” in “science fiction” with respect, going into exacting care to depict the frailty and tension of deep-space operations like waking from cold sleep and docking a shuttlecraft.

And yet, for the most part, the film emulates the visual feel of Star Wars — the “lived-in” universe. What makes Alien interesting is that it doesn’t use this style to make Alien feel more like a convincing other world but rather a convincing version of our own world’s future. The Nostromo‘s crew are basically space truckers, highly skilled yet blue collar workmen scrabbling for a living wage as they haul a 20-million-ton combination cargo ship/refinery through the void. The Nostromo has its share of sophisticated tech (accounting for the fact that set designers in 1979 couldn’t really foresee the direction computer technology would go over the following 30 years, of course) but it also feels rugged, mechanical, basic. Hallways double as conduits for pipes, hydraulics rupture, the heat of the smelters creates condensation that drips into the storage and cargo areas.

Alien works so effectively because it goes to painstaking lengths to make everything about its far-flung future feel real, even mundane. The growing intrusion of the uncanny in the film’s second half — the fossilized alien space jockey, the light-emitting mist, and ultimately the bio-organic marauder that takes out the crew one at a time — feels all the more jarring and upsetting because it feels so out of place in the drab, rust-colored microcosm of punch-card routine that is the Nostromo. And as the crew struggles and fails to overcome the invader, you understand that they’re not hyper-competent warriors armed to the teeth but rather a bunch of blue collar astronauts using the best of their know-how to cobble together whatever devices they can find at hand into weapons. They’re just like us, facing a nightmarish creature from another world.

Ultimately, Alien slots neatly into the horror genre despite its sci-fi patina. And despite its deep-space setting, it’s one of the most convincing horror films I’ve ever seen, because it feels so real and down-to-earth. I intend to watch several current theatrical releases this weekend, and I’m sure I’ll enjoy them for what they are. But I can’t imagine I’ll enjoy any of them nearly as much as I do Alien. It’s truly one of a kind… despite being the first in a lengthy series. Now, that’s a real crime right there.