It’s just as well that I didn’t have a chance to write about last week’s episode of Mad Men on its own, because “The Flood” actually works better as a two-parter with the most recent entry, “For Immediate Release.” While the two episodes have very few themes or plot lines in common and are separated by nearly six weeks’ continuity, the former episode lays down the groundwork for some very important ramifications to come from the latter’s biggest plot development. 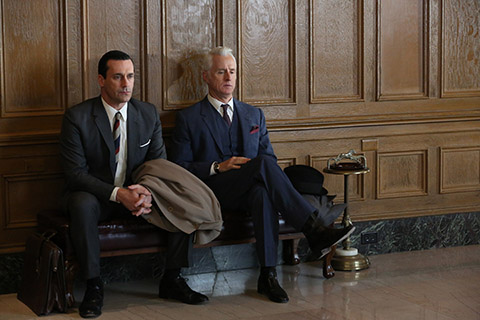 Oh, and there’s one other weird trend they share in common: Campbell’s unexpectedly frequent tendency to serve as Sterling Cooper Draper Pryce’s conscience. How screwed up is your organization when Pete Campbell is your moral compass? Yet here we are. In “The Flood,” he well and truly cemented the fact that Harry Crane has replaced him as the most deplorable principal at SDCP (as I said in my last write-up, though you didn’t believe me) by loudly berating Crane for his mercenary response to the MLK assassination. “It’s a shameful, shameful thing!” Campbell shouts, referring not only to Crane’s perspective on MLK’s murder existing only in terms of lost ad revenue but also to the simple tragedy of a great man’s violent death. And this isn’t even some new trait that manifested for the sake of plot, either; Campbell reacted much the same way to Kennedy’s death years before as well.

Campbell is a strange character. He’s so eminently detestable, quick to cheat on his wife, eager to whore out a long-time coworker, and a borderline rapist with his neighbor’s au pair. And yet… he’s often right, perhaps more often than anyone else at the company. He frequently approaches “right” from the wrong direction, but his paranoid ravings and self-centered pomposity have an unerring tendency to lead him to the proper solution or course of action. Were he not such a weaselly little creep, he’d quite likely be the protagonist of the show. Instead, he’s evolved from irritating antagonist in the very early days to… whatever it is that he is now. Not quite an equal to Don Draper, but certainly able to call him on his crap….

….which he does here, and rightly so, as Don’s arrogance nearly sinks the entire company. Certainly it blows SDCP’s hopes of an IPO and potential to double its size. Of course, this being Campbell, his righteous indignation is hilariously undermined by the fact that he can’t even descend the stairs without making a fool of himself. But he’s absolutely correct in berating Draper for destroying their essential Jaguar account out of sheer pique. Jaguar, for which Joan degraded herself, which played a tragic role in Lane Pryce’s suicide. “All of this was for nothing,” as Joan says, infuriated by Don taking yet another ego trip that affects everyone around him and having the gall to dress it up as protecting Joan’s honor.

If there’s a flaw to this episode, it’s that the conclusion seems too pat. The big plot twist — SDCP merging with rival Cutler Gleason and Chaough to win an enormous Chevrolet account — gives Don an easy out. Sure, he screwed up Jaguar, but he made it OK by winning Chevy. Not only that, he was partially absolved of blame for sinking the IPO since Campbell unwittingly managed to undermine their long-standing Vicks account at the same time. At the end of the day, Don comes away looking like a hero, saving the day with a bold act.

At the same time, it’s hard to see it as a clean victory for him. Much of what makes “The Flood” so valuable is that it contrasted CGC’s internal culture with SDCP’s — while Peggy Olson’s new home has its downsides, it also feels like a far more compassionate and human place than the old-school SCDP. Between Cutler, the CGC partner who looks and acts like Roger Sterling with thick glasses, and the firms’ curiously similar-looking African-American secretaries, SCDP comes off as the evil mirror universe version of CGC, and I have trouble imagining the marriage of the two companies will be particularly smooth.

But the most important takeaway is that Don Draper is no longer the indestructible, gleaming knight of yore. The merger decision deliberately parallels the dissolution of Sterling Cooper into SCDP at the end of season three, but it’s handled far differently. It’s not the climax of a long-running storyline, it’s not something everyone teamed up together to agree on, and it’s not an instant win. It’s Don and Roger — who, to his credit, has finally figured out how to use his social engineering skills to win new business for perhaps the first time in his career — making a precipitous decision in order to win at any cost and Don smooth-talking Chaough (who had his own reasons for wanting an out for his own firm) into something that may or may not work out in the long term.

In the short term, the Chevy account will do fine for them. Turns out the “top secret” project the newly Voltronned firm will be repping is the Vega, a car that received rave reviews in its early days but ultimately succumbed to reliability issues that undermined its reputation and Chevy’s — but that was in the ’70s, well after Mad Men will end its seeming mission to journey through the ’60s from start to finish.

“For Immediate Release” refers to the header of the press release Peggy — now copy chief at one of the country’s largest ad firms — types up to announce the merger of SCDP and CGC. But it also hints at the rashness of actions throughout the episode, people finding release (in the sense of catharsis or satisfaction) on the spur of the moment rather than taking the long view. Don gives sleazy Jaguar dealer Herb a piece of his mind, blowing the IPO: Something he might not have done if he hadn’t blown off Campbell’s attempts to loop him in on the news with his usual condescending contempt for his junior partner. Campbell, for his part, ruins the Vicks relationship and his own marriage by seeking his immediate release in a whorehouse to celebrate the pending IPO rather than holding out for reparations with his estranged (but slowly thawing) wife Trudy. And the merger ends up coming off as a hasty solution to an immediate problem that will have long-term ramifications.

But Don wins no friends this time around. His grandstanding has worn out its welcome with his peers, and his arrogance feels more like bullying than self-confidence. “This is why everyone hates you,” jokes Chaough, but he’s only half-kidding. Peggy’s response to the news of the merger says it all: She soaks up the announcement in near-silence, wandering mutely to her typewriter to draft a news release on her inability to escape Don’s shadow. In fairness, she went into that meeting expecting an immediate release of her own with Chaough (the chemistry between them has clearly been brewing all season) and was horrified to find not a tryst with her boss waiting but instead Don lurking off to the side, inexorable in his permanence in her life. But SCDP+CGC won’t be the slam dunk that SCDP’s formation was, and there’s a reason this merger happened mid-season rather than as the finale: We still have half a season of fallout to witness. And I don’t think it will be pretty, for either the firms or Draper, an aging relic of a bygone era living atop an increasingly fragile ivory tower and in another man’s increasingly moot identity.

9 thoughts on “The Flood/For Immediate Release”