After three days, Telebunny rose from the grave

Hey guys, I got married yesterday. Again. We finally beat the corporations and did it on our own terms.

Cat and I were supposed to have been married in April 2010, but the year before that she took a job for a Canadian corporation that had her travel the breadth of the U.S. taking location and promotional photos of hotel chains. She would shoot for 16 hours, drive a few hours to a town in another state, and do the same thing the next day. She did this for months on end, and the corporation wouldn’t pay lodging for her to take a day off while she was on the road. After four or five months of this, she became critically ill, and it took more than a year for her to recover. So she was in no condition to plan a wedding and we had to push the date back indefinitely.

Fortunately, 1UP was owned by Hearst at the time, and they were cool with providing the health insurance she needed to recover as my beneficiary once we became legally notarized domestic partners. That was fine for a year, but then IGN bought 1UP and things changed. I didn’t realize it at first, because I asked our new HR department if they covered domestic partners. “Absolutely,” they responded. Then, a month later, when they finally got us our benefits paperwork with less than two weeks before our Hearst coverage ran out, I noticed there was no option for me to cover Cat.

“I thought you cover domestic partners,” I said.

“You couldn’t bother to tell me this a month ago?” I demanded. “This has a huge impact on my life.”

“You didn’t have to accept this job,” they told me, compassionately and with remarkable class. So, Cat and I rushed to have a civil ceremony a few days later so she could have medication and not die. Fox is an amazing company and I really miss being under their employ. I miss the cold frankness with which they treated me as working meat.

But yesterday we finally had the wedding we wanted. It was a fantastic day.

Cat wanted a Mad Men theme; I felt that was a little too on-the-nose, so we went with “early ’60s chic.” (The DJ played “A Beautiful Mine” when we cut the cake anyway, but that was funny.) The great thing was that a bunch of people took the style request seriously and came dressed in elegant ’60s-style outfits, especially the women. Cat’s dress was actually a contemporary couture creation (and it took us years to pay it off), but my outfit was a legit early ’60s tux. We’d already chosen the theme before I bought my tux, but I didn’t deliberately go out searching for clothes of that specific vintage; it sort of happened through serendipity.

We went to a great vintage shop in San Francisco’s Haight district and saw a really unique silver sharkshin tuxedo jacket up on a high shelf. The fabric is a shimmering, grey, coarse silk shot through with rough white and black threads, and the cuffs and shawl-style lapels are made of satin. It’s gorgeous Cat talked me into trying it on, even though my first instinct was that it would be too flashy. But then I tried it on and experienced the rarest form of fashion serendipity of all: The jacket fit perfectly right off the shelf. Also, it looked great on me. When unique, 50-year-old apparel fits like it’s tailored perfectly to your frame and looks great, you don’t think twice: You buy. The vintage shop staff did a pretty good job of selling it, too; they claimed that people had been trying it on for months but everyone was always too large. The acted like the jacket was the sword in the stone, waiting for the one man of proper lineage — in this case, a lineage of short people with small builds — to claim it. 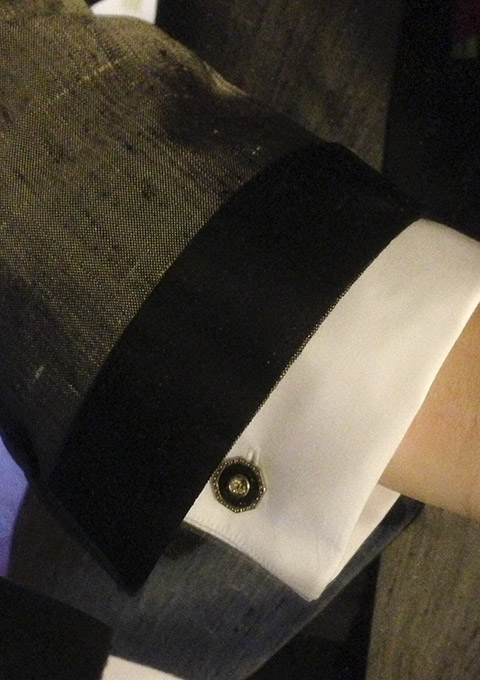 Now I just need to come up with some other excuses to wear this thing. It’s too beautiful to let languish in my closet.

We played the vintage thing to the hilt for my tux: Vintage trousers with a beaded band on the outer leg seam, a vintage Brooks Brother bow tie, even a secondhand shirt. Cat’s wedding gift to me was a beautiful pair of 100-year-old cufflinks, silver with enameled black and inset rhinestones.

The one downside to all of this is that it makes me realize how mundane my normal clothing is. I try to dress smartly, but there’s a difference between being fairly put together and being genuinely stylish. Maybe we can kick off Tux Fridays at IGN soon.

P.S., this is not a site about cufflinks photos. I’ll be back to business as usual soon.

29 thoughts on “After three days, Telebunny rose from the grave”