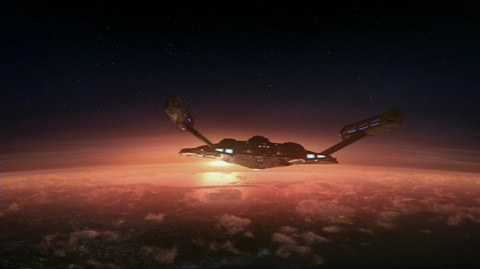 More than a year after I kicked off the “Trek Trek” project, I’m finally 3/4 of the way through Enterprise. In fairness, those first two seasons were rough going. But season three more than made up for it, paying off in a surprisingly big way. Not only was it a great season of sci-fi television, it was incredibly true to the classic Trek spirit after the series spent several years (including a couple of bunk motion pictures and the whole of Voyager) wandering in the weeds.

In a way, I think we have George W. Bush to thank for it. Star Trek came into the world as a product of the Atomic Age, and much of the original series was shaped by the real-world Cold War. Beyond the obvious parallels between the Klingon Empire and the Soviet Union (not to mention the Romulans/Korean, who clearly had some sort of ancient racial connection to our new friends the Vulcans/Japanese but were much less friendly, out there beyond the Neutral Zone/DMZ that was established after our war with them), the entire cast was designed to speak of a world united in peace, totally unlike our savage 20th century. And, of course, many original series plotlines were not-so-thinly veiled allegories for real-world social politics.

As the Cold War crumbled at the end of the ’80s, Trek changed gears, making the Klingon/USSR metaphor even more on-the-nose. And it worked for a while, but eventually all that peace caused the franchise to run out of steam. Without much obvious social injustice to speak out against — outside of the Bajoran/Cardassian conflict that set up Deep Space Nine and seemed to speak to post-Communist strife in Asia and Africa — Trek kind of puttered to irrelevance.

Not surprisingly, then, the U.S. government’s frequently ugly response to 9/11 galvanized Trek — and in fact a lot of television. Season three of Enterprise is basically a shaggy-dog parable for the “war on terror.” The U.S. is attacked suddenly by an unexpected enemy, and Enterprise is sent into unknown space to put a stop to them before they destroy Earth altogether. The crew finds itself out of its depth, and in desperation the captain resorts to shoving an enemy into an airlock and depressurizing it until the alien agrees to talk. Ultimately, though, it’s not this act of torture that saves the day — on the contrary, it comes back to haunt the captain as it causes would-be allies and his own crew to question his actions — but rather the crew’s discovery that their enemy isn’t some monolithic entity that hates humanity to a one and seeks Earth’s destruction. The Xindi consist of multiple races, some more aggressive than others, and even those who have taken part in the attack on Earth prove to be reasonable, compassionate people willing to see humanity’s side and decry the plan for genocide.

If that’s not a metaphor for the last decade, what in the world is? The idea of Xindi-as-Islamists isn’t exactly subtle here, all the way down to their multiple sects and internal disagreements. And Archer-as-torture-agent takes a very different angle to the matter than something like 24, where any means to a positive end works. Archer doesn’t act entirely heroic here — including a final act of piracy that effectively reduces the Enterprise to a bunch of pirates — and even if his decisions are painted as necessary, everyone is unhappy about them. This is highlighted quite neatly in what could have been a throwaway episode in which Archer falls under the influence of a toxin produced by unhatched broodlings of the insectoid Xindi race and imprints on the eggs, placing their protection above all else. But his irrational actions and compromising command decisions feel sufficiently in keeping with his uncharacteristic choices in the Expanse that it takes a while for his crew to cotton on to the nature of his decisions — effectively saying, “Hard-ass Archer is almost indistinguishable from mind-controlled Archer.”

That’s the thing, see: This whole thing works really well. It felt like the classic Trek I fell in love with as a kid, but with a more contemporary edge… and continuity! Because ultimately the solution isn’t to fly in with guns blazing, or to launch a suicide attack. The Enterprise crew triumphs by connecting with the Xindi, learning the truth of the situation, and cooperating to overcome a greater threat. For all the well-deserved crap that Berman and Braga took for some of the bone-headed choices they made while helming Trek after Roddenberry’s death, Enterprise season three demonstrates that they actually did get what Trek was about, and that rather than yielding to the idea that Trek had to be grimmer and grittier in order to stay relevant they flipped the bird to that notion and came ahead by upholding the fundamental Trek philosophy of cooperation, understanding, and peaceful resolution. Honestly, it kind of makes me like the J.J. Abrams movie a little less; I’ve stood behind its over-the-top take on the franchise out of the assumption it was the only way to redeem what Trek had become. Now I see that it was already on the road to redemption. It’s still a fun movie, but I can’t help but wonder: What if?

And, on top of that, they capped off the season with a two-part episode that apparently put a very welcome end to the Temporal Cold War plotline. No more Daniels, no more Suliban. Just an incredibly satisfying finale that saw the Enterprise coming in low toward New York as the sun rose over the horizon (an effect shot worthy of the Trek movies), followed by a crazy dogfight between the limping, combat-battered Enterprise and a squadron of plasma-powered German Spitfires piloted by aliens from the future over the streets of alternate-history Nazi-occupied WWII New York. 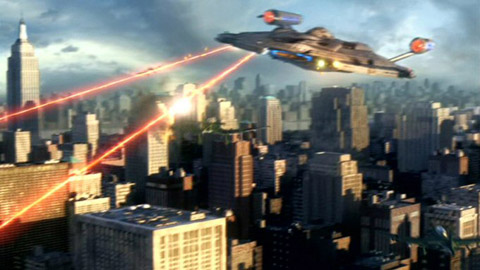 Please do not send that last sentence back in time 25 years to my Trek-obsessed junior high self. He would die from happiness, and then I wouldn’t be able to write the sentence in the first place, and the universe would collapse from a temporal paradox.

Now, I’ve heard season four is even better than the third, but honestly I have a hard time believing that. Enterprise season three was pretty much everything I’ve wanted from Star Trek. Purpose, not-so-delicate metaphors, character growth, and some pretty decent stories and battles. Color me surprised, but in the best way possible. Enterprise, you’re pretty OK! Sorry you had to die young.