Hi! I’m gonna do some more of this Evangelion thing. 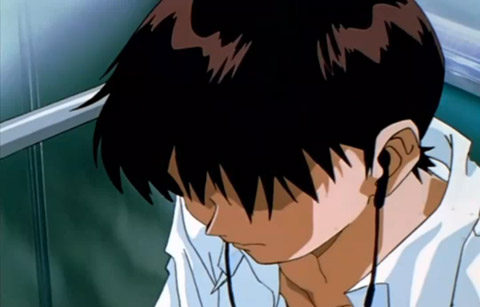 Episode 4 is pretty different from the previous episodes of Evangelion in that its climax happens about five or six minutes in and doesn’t really seem particularly climactic. It also has practically nothing whatsoever to do with giant robots or invading aliens from space. Episode 4 is really about Shinji and his lifelong companion, depression.

I’m pretty sure that when people complain about how spineless and pathetic Shinji is, they’re thinking of episodes like this. I’ve never bought into the mindset that Shinji is annoying and whiny (and whatever whininess may be present probably has to do with his English voice actor being a grown man trying to sound like an emotionally distressed teenager), but watching with the clarity of years and experience this episode doesn’t make me hate Shinji at all. It just makes me sad. 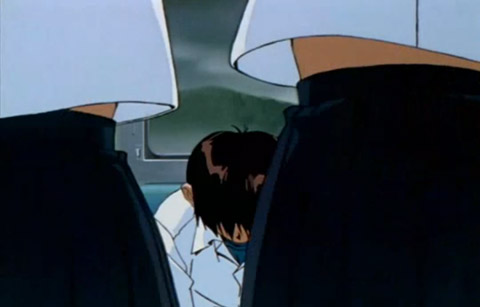 Devastated after the events of the previous episode, Shinji hides in his room for a few days. When Misato finally looks in on him to coax him to school, she discovers he’s run away. The first half of the episode simply follows Shinji as he wanders through Tokyo-3, riding the train until it reaches its terminus. Simple time-lapse editing shows him motionless the entire way as people board and disembark all around him for what must be hours. And the whole time, he simply listens to the same track over and over again on his minidisc player (how futuristic!). 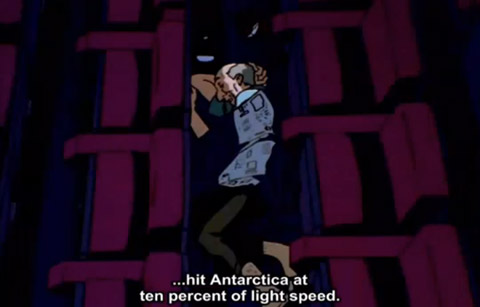 The writers even manage to sneak in a few details about the series’ backstory amidst all of this. Shinji kills time in Tokyo-3’s equivalent of Roppongi, sitting in an all-night theater in which a corny dramatization of Second Impact plays. An old dude sleeps on the floor (so gross) while a couple grope one another in the dark; all the while, the movie’s dialogue track plays out an explanation of what has happened to the world — or at least the story as the public knows it.

Shinji watches and observes, but remains separate from it all. He drifts in his bubble of isolation and despair, insulated from the world around him by the unnamed track on his music player. 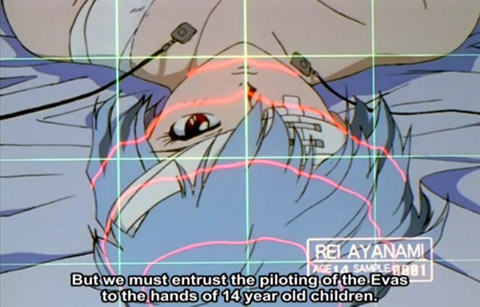 We’re also given an insight into Shinji’s state in a brief cut to NERV headquarters, where Rei lies under examination. As the machines scan her, Misato and Ritsuko discuss the hardships of being an Evangelion pilot and the general unfairness of placing such a burden on children.

Eventually, Shinji bumps (quite improbably) into his classmate Kensuke Aida out in the middle of the fields at the outskirts of Tokyo-3; Aida, he learns, is a military otaku who plays soldier all alone. And, like Shinji, he has no mother. Everyone, it seems, has their own way of coping.

Shinji camps out with Aida, and with the arrival of dawn NERV’s security personnel close in on Shinji and retrieve him. Misato lays into him… 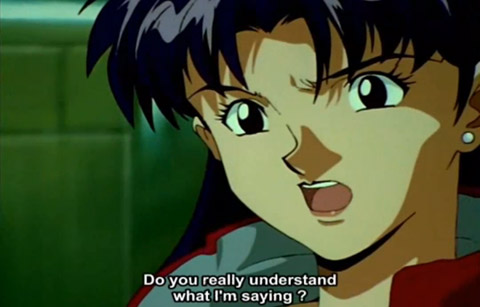 …to which Shinji responds blankly, then quits. But then he un-quits. Yay! Happy ending.

But not really. Shinji ends the episode by accepting his responsibilities as an Eva pilot and allowing himself to accept Misato’s care. He overcomes the immobility of depression for a moment. But it doesn’t solve his bigger problems; it’s merely a respite. A breakthrough to be sure, but not a fix.

Which brings us to the climax of the episode, after which everything else is merely denouement: 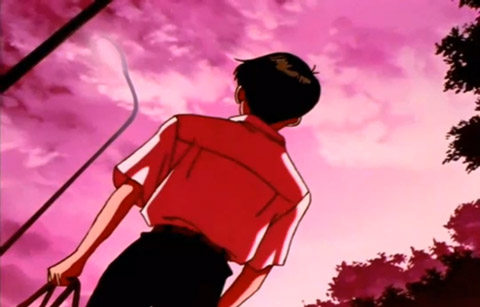 As he walks through Tokyo-3 after his night in the theater, the city begins to wake up. In the magenta light of breaking dawn, Shinji finds himself overwhelmed by the sounds of the stirring city. Traffic, insects, people talking — it’s all too much for him, and he runs to the countryside to find solace in the silence of wayside shrines. Here we see Shinji’s breaking point, the moment that even solitude can’t provide escape.

This is why Evangelion was so different from giant robot anime that had come before. Because it devoted an entire episode to its protagonist’s suffocating depression. I can understand why these slow, introspective episodes didn’t go over well with everyone, because having something like this thrown in your face can be uncomfortable. For anyone who has never seen depression up close, Shinji’s behavior must seem baffling or simply self-indulgent. If you have experienced clinical depression, however, either in yourself or in someone you love, you’ll recognize his immobility and desperation to escape as crushingly, heartbreakingly real.

I joked in the Evangelion Thumbnail Theatre that episodes 25 and 26 were Hideaki Anno’s public couch trip, but now I regret being so juvenile. Anno really did work through some personal issues with Evangelion, but I suspect this episode was far more cathartic than the series finale. It’s intense in its quiet authenticity. In retrospect, it’s a miracle a series like this ever reached the air — but I think the fact that it unflinchingly depicted a weak, emotionally wounded main character had as much to do with its success as its weird, half-explained sci-fi lore. Evangelion deconstructed robot anime, but it dismantled the robot anime hero.

3 thoughts on “ReWATCH of Evangelion:04”