Trek Trek: Make it so (good) 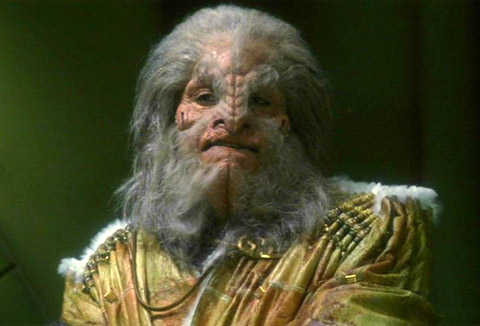 I’m well into the third season of Enterprise, and it’s still getting better with each show. The Internet told me this show was awful, but I find myself looking forward to working out every evening so I can see the next episode while I exercise. Everything’s gone topsy-turvy!

But seriously, this season so far (two discs in) has been a pleasant surprise. It’s one of those rare instances where the show runners had the opportunity to change the formula and make a change for the better — and they did! It’s a shame Enterprise‘s first season or two poisoned the well and the ratings were already plummeting at this point; from what I’ve seen here, I really think it deserved better than to die with fewer episodes under its belt than Voyager. Well, assuming it can maintain this momentum. I guess we’ll see how the final season and a half go.

I lamented the series’ lack of weekly continuity and long-term structure last time I wrote about this show, longing for something more akin to Battlestar Galactica — an episodic format with overarching, overlapping storylines — and to my astonishment, that’s exactly what this season has brought with it. The season two finale had the potential to introduce a big ol’ story arc or wrap neatly in the season three premiere, and I’m very happy that they chose the former path. I kind of feel like this section of Enterprise is what they had intended Voyager to be: The ship on its own in uncharted, hostile space with a desperate mission to complete and high stakes to overcome.

The gimmick for this season is that the Enterprise is cut off from the rest of Starfleet upon entering something called the Expanse, a vast, shrouded area of space distorted by dangerous, reality-warping spatial anomalies. Their mission is to prevent the mysterious Xindi from deploying a weapon to destroy Earth. The details keep this from being a bog-standard threat: The Xindi is actually a consortium of races that share an uneasy alliance, and their mission to annihilate Earth has been motivated by incomplete information from the future that indicates humanity will destroy their races 400 years hence. The present-day Xindi don’t really know anything about Earth or humans and assume the Enterprise‘s incursion into the Expanse is prelude to an invasion, so rather than take on the ship and destroy it (which they could easily do) they choose to remain hidden, making for an interestingly tense situation on both sides of the war as neither faction is certain of the others’ motives. Meanwhile, as Enterprise explores the Expanse, the seemingly artificial nature of its space-warping effects begins to become evident.

The overall narrative of the Xindi mission brings an unusual level of tension and risk to the show; even though you know everything will turn out OK in the end and the status quo will be more or less maintained, it’s interesting to watch the story unfold. The Xindi prove to be a pleasantly nuanced enemy (in that many of the representatives of the species the Enterprise encounters aren’t enemies at all, and different species have distinct agendas and temperaments). The main complaint I have is that the anomalous nature of the Expanse gave the writers an excuse to revisit some hoary old sci-fi tropes; there’s the episode where the crew suddenly undergo a total physical metamorphosis only to be reverted to their normal selves later, for example, and the obligatory zombie episode (as if the Borg weren’t all the zombies Star Trek needs). But even these manage to work better than expected: The zombie episode involves rampaging Vulcans of all things, and the nature of the crew’s silly mutation turns out to be strangely touching (plus the show doesn’t revert the crew’s metamorphoses instantly — they still bear the residual effects of their change the following episode).

But when the episodes work, they’re great. The ongoing subplot about the miracle alloy that could protect the Enterprise from the Expanse’s anomalies takes an unexpected turn when its potentially detrimental effects on T’Pol’s health come to light. The second episode of the season shows just how far the crew is out of its depth when the Enterprise is knocked powerless by an anomaly and raided for supplies by space pirates. “The Shipment” reveals the breadth of opinions and inter-species conflicts among the Xindi and makes Archer realize that preventing the construction of the superweapon can’t include collateral of innocents. And best of all is the most recent episode I’ve watched, “Twilight.”

“Twilight” takes pretty obvious cues from the most beloved episode of The Next Generation, “The Inner Light.” It centers on the captain and spans years of his life, and even the episode title feels like a callback. But rather than place Archer in someone else’s life, it traps him in a 50 First Dates sort of amnesiac state in which he sustains a head injury protecting T’Pol from an anomaly and loses his long-term memory thereafter. Waking up 12 years older in a home with T’Pol on an unknown world (though not so unfamiliar to fans of Star Trek II), Archer learns that his memory loss forced him to step down as captain, leaving T’Pol in charge of the ship. A tough decision she made in the heat of combat crippled Enterprise, allowing the Xindi to destroy Earth and every human colony they could find after that. Although the reset button is pretty self-evident from the start (the problem started with an anomaly, which are to season three Enterprise as nanomachines to Metal Gear Solid 4), it unfolds flawlessly, balancing the bittersweet relationship that develops between Archer and T’Pol over the years with the harrowing, doomed last stand of humanity (complete with a Galactica-like convoy of survivors numbering in the thousands). Everything turns out all right in the end, and some of the special effects are a delightful kind of terrible, but it’s a great episode nonetheless.

I don’t know, guys. I’m unapologetically enjoying Enterprise. I have a feeling it can’t last, but this is good stuff. Weird, right?