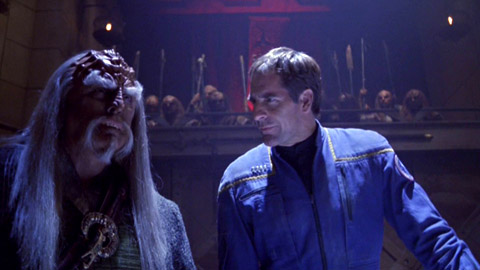 I’m going to change my approach to this Trek Trek thing, since no one seems to care (at least until I’m through with Enterprise) and I don’t want a mutiny on my hands. Instead of saying, “This episode was kind of pointless” for a bunch of pointless episodes, I’ll only remark on the, uh, remarkable ones.

Fortunately, this latest batch includes several of those, believe it or not.

Cease Fire: The female Andorian soldier probably could have been played by Jane Lynch, and it’s a shame that she wasn’t. Otherwise, who cares?

Future Tense: It seems like everyone hates Enterprise‘s “temporal cold war” plotline, but I actually enjoyed this standalone piece. It ties in with previous episodes and includes a few continuity nods, and it plays with the side considerations of time travel in an interesting way. For once, the abrupt ending works — rather than coming off as an anticlimactic deus ex machine, it feels more like a logical outcome of dealing with time travel.

The Crossing: As did this one.

Judgment: And then we have this, which is quite easily the best episode of the series to date. At first blush, all I could think was, “Well, this is just an embarrassing rehash of Star Trek VI“; Archer goes to trial in a Klingon court for conspiracy against the Empire, and they pretty much use the same set as Star Trek VI‘s Klingon court. Archer even ends up being sentenced to life of hard labor on Rura Pente, for crying out loud. And yet, there’s much more to this episode than simply an anachronistic shoutout to one of the films. It drops the standard B-plot to focus entirely on Archer’s situation (which means that, unlike most episodes, the plot feels properly fleshed out for once), and the bulk of the story involves his relationship with his sympathetic Advocate, an elderly Klingon public defender who laments the Empire’s slide into warmongering and false honor. It’s one of the rare glimpses the franchise has offered into the Klingon race’s non-warrior aspect and frankly is a lot more interesting and dimensional than The Next Generation‘s generally one-dimensional explorations of Worf’s heritage. It’s not as good as John M. Ford’s The Final Reflection as an exploration of Klingon culture, but so far as actual Trek canon goes it’s right up at the top. A really interesting and well-written piece of Trek by any standard, hurt only by Enterprise‘s crippling fear of allowing a storyline to expand beyond the safe boundaries of a 40-minute episode.

Horizon: Likewise this episode. Ensign Mayweather visits his family on the interstellar freighter they inhabit and encounters friction, blah blah blah. It’s one of the few times Trek has really ever explored life in space outside of Starfleet’s top-of-the-line starships, and it’s a pity it only lasts 40 minutes, because the open-and-closed nature of Enterprise‘s writing makes it feel pat and insubstantial. If this storyline could have spanned several episodes — maybe allowing Mayweather to ply a life outside of Enterprise for half a season or so — we could have seen a real glimpse of the early Federation from the day-to-day perspective of civilians. But, no; Mayweather clashes with his brother for a few minutes, then they suddenly make up when the plot calls for it and go their separate ways in good spirits. Yawn. This really makes me long to see Trek return to television in a serial format reminiscent of Battlestar Galactica… except, you know, better.