Did you know that this week marks the 20th anniversary of the Sega CD? Hi! You’re old. To celebrate our mortality, I’ll be posting all of GameSpite Journal 12‘s Sega CD content over the coming days. Oh, don’t sulk. I’ll publish some other stuff, too.

And as a reminder, the coupon code FANS will net you 20% off GSJ12 on the Blurb store for the next week or so. It’s also good for anything else you pick up from Blurb, but I figure you’d want to cuddle close to the Sega CD given the importance of this moment in time. 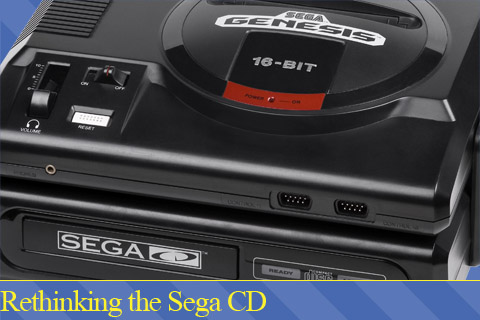 Critics and historians often point to the Sega CD, as with so many other add-ons of the day, as a failure. It fragmented the market, they claim. It was needlessly expensive and few developers justified their use of the format, they chide. Maybe so.

But you also see a tendency, in hindsight, for people to conflate the Sega CD with the 32X. Yes, both were pricey add-ons to a popular console, but there’s an important distinction between the two: One was a disastrous insult to fans, while the other was actually a pretty nice addition to a great machine.

The Sega CD harbored a twofold purpose. First, it expanded the storage capacity of Genesis games well beyond the limitations of cartridges, and for a lower cost. Sure, Lunar 2: Eternal Blue (on CD) cost $60-$70 at launch, but Phantasy Star IV (on cartridge) cost $90-$100. Secondly, it more subtly augmented the Genesis’ technical capabilities, offering a richer color palette and hardware effects comparable to the Super NES’s dedicated modes. In short, it was designed to allow the Genesis to leapfrog a console that arrived two years after its own launch.

Sega clearly put a lot of consideration into the Sega CD, quickly redesigning both the base console and the add-on to better work in tandem; the front-loading, stacked design of the initial Sega CD gave way to a side-by-side design with a less fragile top-loading disc mechanism. The Sega CD also gave Sega the excuse to create the CD-X, one of the greatest game consoles ever designed: A compact, integrated, Discman-sized device capable of playing both Genesis and Sega CD games.

Given its niche status as an add-on, both Sega and its third parties put forward an impressive effort to support the system. The system offered fantastic original titles like Cosmic Fantasy II, Keio Flying Squadron, and Switch (aka Panic). Ports were in healthy supply, too, including the then-definitive version of Hideo Kojima’s Snatcher, a compilation of the portable Shining Forces, and a proper conversion of Final Fight that put the butchered Super NES mess to shame. And let’s not forget Sonic CD, easily one of the finest entries in the long-running franchise. Or Popful Mail, which was not so much a port as a different version of a game, but was in any case brilliant all around.

Sure, the Sega CD suffered from filler content, awful FMV titles, and lazy ports whose “CD enhancements” consisted of badly compressed public access-quality video or a Redbook butt-rock soundtrack. But what system doesn’t have its share of forgettable material? The value of a console isn’t in how many bad games it offers but in the quality of and strength of its good games. The Sega CD’s library features plenty of greats: Games that deserve to be remembered. And for that fact alone, the add-on should be treated as an essential component of any Genesis fan’s set-up.