I’m finally caught up to real-time with Breaking Bad. I’d like to thank the OG iPad for making this possible. Probably the smartest thing Apple ever did with that device was putting a video decoder on the processor; I watched eight hours of the show in the course of my flight to Japan and still had half a battery charge left. That is amazing. 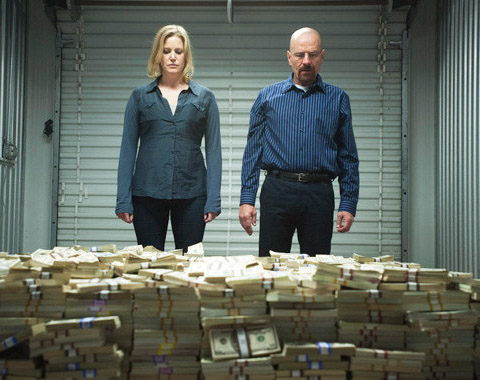 Breaking Bad turned out to be a serious slow burn. While I was watching through Mad Men earlier this year, people kept telling me how Breaking Bad is the only show that can give it a run for its money as “best written series currently on TV.” It took me until the plane crash to realize what they meant. On its surface, Breaking Bad seems almost mundane, with its long conversations full of meaningless pauses and discussions of seeming trivial day-to-day matters, but it works incredibly well over the long term as those domestic concerns splinter away because of Walter White’s actions: The subdued first season gives the quiet brutality of the later episodes more heft through context. The creators juggle a remarkable number of minor details that weave themselves into the story and pay off sometimes seasons later; even if they’re making it up as they go along, they do an extraordinary job of selling it.

And like I said, it took a while to pay off. Compared to Mad Men, its pacing is glacial, but its writing is great — simply great in a completely different way. Mad Men episodes tend to be fairly self-contained despite their serial nature, piling thematic layers atop one another. The dialogue is too clever to be real, too meaningful to miss a word of, with characters echoing one another in ways both overt and subtle within a single episode (e.g., “You haven’t thought this through!”). I saw a lot of complaints that the most recent season of Mad Men did too much of this, but the series has always dabbled in pushing believability for the sake of muted cleverness, and I enjoyed every minute of it.

It took me a while, but I finally put my finger on the differences between the two series’ respective writing styles: Mad Men presents itself like a stage play, dense and self-contained, while Breaking Bad plays out more like a novel, rambling and unfolding over the course of a season. If you look at each season of the series as a single “book,” it works perfectly: Another 1,000 pages of a man’s descent into some terrible place, volumes one through five.

I thought Season 5 (part one) did a great job of setting up an obvious direction for the story and suddenly derailing it in an unexpected but natural direction in its final minutes. Given the way the season opened, with Walt on his own buying an air-cooled assault rifle, I knew things weren’t going to turn out well (and why should they? Breaking Bad is a much better making-of-the-villain tale than the Star Wars prequels could ever have hope to be, and Walt doesn’t deserve a happy ending), and given the fact that he and his kids were sitting around watching Scarface a few episodes in, I saw the natural progression coming as Walt’s attempts to set up an empire would blow up in his face. Another show glorifying the gangster life. Die in a blaze of glory, clutching wads of cash in anger and resentment. Isn’t he so cool? (Aside from the times he gets rattled and screws up, or he shrugs off an innocent’s death, or Mike calls him on his sloppiness, or he breaks down weeping, I mean.)

But that’s not what happened at all. Instead, Walt won. He built an empire in the space of a few months and took care of all the potential threats to his own safety either through collaboration or by simply shankin’ em. The use of a montage to represent a months-long span of time seemed at odds with the rambling narrative style of the show at first — Breaking Bad loves its slow burn and lingering scenes — but makes sense. Breaking Bad deals in tension and uncertainty. There’s no tension in unmitigated success. Why dwell on Walt’s rise to emperor when he has all the angles covered?

So I really didn’t expect that, when confronted with a stack of bills worth around $20 million, Walt would suddenly experience a profound sense of perspective and realize all he had given up to build that pile. In the end, he realized didn’t want to be Heisenberg if it cost him every relationship in his life, and he made the most unlikely decision the show could have put forward, though a narratively consistent one: A clean break.

And the subsequent last-second twist was nicely pulled off. The Chekhov’s “gun” that came to bear on Walt (without his even realizing it) appeared visibly several times throughout the season, innocuously enough to look like a callback, but always framed in an overt and hard-to-miss way. During the last episode’s penultimate scene at the poolside, I kept expecting something to go horribly, violently wrong, like some dudes bursting in and gunning down the family, or a bomb going off. But the actual escalation turned out to be much quieter and more in keeping with the series.

2 thoughts on “A terribly late post about Breaking Bad”