GameSpite Journal 12 is now on sale, and the Blurb coupon code WONDERFUL will net you 15% off through the end of the month. And now: 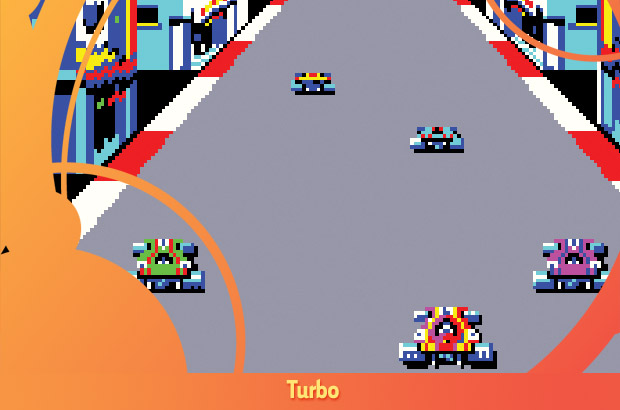 By 1981, Sega had almost entirely converted its arcade lineup from pellet guns and motorized cars to sleek, future-flavored television games. The company had more than a dozen video games under its belt and was doing well for itself. Its well-established international distribution network made it a go-to for up-and-coming arcade aspirants; in fact, 1981 saw Sega’s first big win in the form of Frogger, a title it distributed for a little-known entity called Konami.

What Sega didn’t have by 1981 was a major internally developed hit. And, unfortunately, Turbo didn’t change that. But by god, it should have. Turbo offered the single most amazing arcade racing experience ever seen to that point. It featured both stunning “lifelike” “3D” graphics—a third-person behind-the-car view on a twisting roadway with scaling background elements and competitors—and a variety of scenery.

Turbo didn’t pioneer the concept of scaling visuals to simulate a road; Atari’s Night Driver owns that claim. But unlike Night Driver, Turbo didn’t cheat. Atari’s racer featured a solid black road with the shoulders defined by small white “reflectors”—a masterpiece of abstracted minimalism playing off the human mind’s need to couch imagery in familiar terms to be sure, but not exactly the most visually stunning creation.

The racing action itself never strayed far from simplistic; the player’s task was simply to race as far as possible before time ran out, maneuvering ahead of AI competitors that seemed practically oblivious to your presence. Still, what it lacked in depth it more than made up for with sheer visual prowess.

It may not have been a massive hit, but Turbo defined Sega’s output for the coming decade. It was graphically stunning, a lot of fun albeit fairly shallow, and ultimately ended up overlooked in someone else’s shadow. Namco’s Pole Position came along a year later and offered just enough mechanical refinements and visual tweaks to eclipse Turbo and become the best-selling arcade game of 1983 (according to the Internet). If nothing else, Pole Position got its own Saturday morning cartoon, while Turbo got bupkis.

Still, Turbo’s fate wasn’t entirely tragedy and sorrow. While it never received the accolades it properly deserved, the game’s spirit lived on in the form of Out Run, which remains one of the company’s most beloved properties. Sometimes, revenge is a dish best served by future generations.