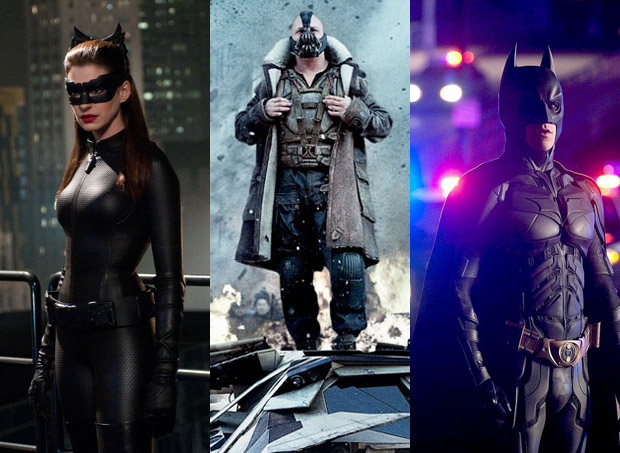 I saw The Dark Knight Rises yesterday. It was pretty good! In fact, I’m going to paint myself as an Internet heretic and possibly a man who shall be regarded by all as a complete idiot by saying I enjoyed it a lot more than The Dark Knight. Yes, Heath Ledger’s Joker made a more interesting villain than Bane, but TDKR feels more like a complete movie than TDK, which was more like a movie and change and should have ended a good 30 minutes sooner than it did. There’s something to be said for a piece that works as a cohesive whole, and what I like most about TDKR is that it makes all three movies work as a unit, self-contained and complete.

Most of the complaints I’ve seen lobbed at TDKR revolve around its assorted logic holes and plot points that stretch credibility. Fair enough, but a lot of these elements are the sort of thing that every movie suffers from; certainly the first two Batman flicks did. I suspect that expectations had a lot to do with it: People loved TDK so much they expected perfection from the sequel, but what they got instead was a very good movie that made many of the same mistakes and leaps that TDK did. And, absent a late, lamented talent’s tour-de-force enhanced Tom Waits impersonation, those flaws stand out a little more prominently. On the flip side, I felt the TDK was drawn out and kind of irritating, especially compared to the considerably leaner Batman Begins, so I found TDKR to be pleasantly surprising.

All told, TDKR has considerably raised my opinion of TDK, because I have a better sense of that film’s purpose now. And I especially appreciate Christopher Nolan’s decision to work counter to the serial nature of comic books in adapting Batman to film. There’s a completeness to his trilogy that simply never happens in franchised, licensed movies like this. TDKR draws upon both of the movies that came before it, adds some new stuff, and wraps it all up.

In the process it does some dumb things and wanders through the land of heavy coincidence. The part that really chafes for me is the whole five-month police situation, which conveniently disregards the nature of a Manhattan (SORRY I MEAN “GOTHAM”) winter, the sanitation needs of 3,000 people, and, hell, the fact that police uniforms probably aren’t going to look super clean and pressed after that sort of ordeal regardless of how much spray starch was lowered in buckets. The science bits of the movie were pretty stupid, too. But what the hell; it’s a comic book movie about a billionaire playboy who dresses in a suit of tech armor that looks like a bat. As such things go, TDKR ranks up in the top-five percentile in terms of believability and coherence. Heck, I’d even go so far as to say it’s the first comic-based movie I’ve ever seen to include multiple villains (the lines are a little blurry on who qualifies as what, but let’s say three and not count Cillian Murphy’s cameo) without any of them seeming extraneous.

Anyway, I was pleasantly surprised by the movie after all the dire things I’d heard about it. And the best thing is that because it offers such a compact sense of closure, I can comfortably ignore the inevitable needless franchise reboot. Well, unless they reboot it as Gotham By Gaslight. I couldn’t say no to that. And since Nolan managed to hit on Year One, The Killing Joke, The Dark Knight Returns, and No Man’s Land, there’s not a lot of other top-caliber material left to be mined. Hmm.