Not no one, not no how 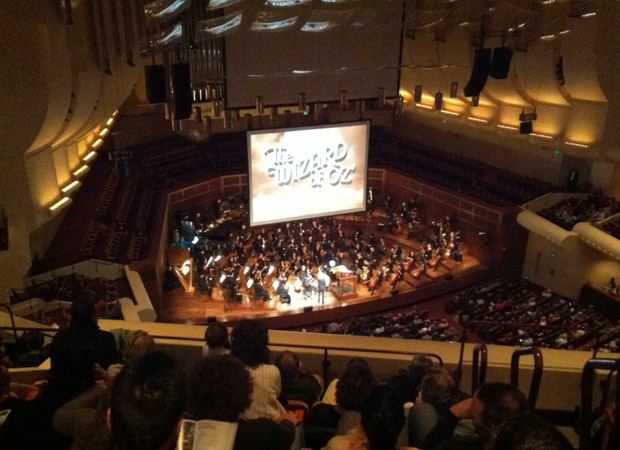 Last night, Cat and I went to a special screening of The Wizard of Oz as a gift for her birthday. What made it interesting was the way the dialogue track had been isolated, with the music track muted and replaced by a live orchestra. The experience had its shortcomings — the mediocre sound quality of the dialogue in a 75-year-old couldn’t quite compete with dozens of people performing live music alongside it — but overall it was kind of amazing. Why don’t all movies feature live accompaniment like they used to?

I don’t think I’ve seen Oz in 25 years, but I remember every single scene. Still, watching it this way — surrounded by families with kids probably seeing the film for the first time — made it feel fresh and new. The audience broke out into sincere applause a few times: When Dorothy steps into a world of color, the melting of the Wicked Witch of the West, etc. Laughter was frequent and heartfelt.

Small as the picture looks in this image, that distant little screen pulled me in and I frequently forgot about the live orchestra altogether. But most of the time, I found myself paying more attention to the score than I normally would. It’s interesting that much of the music in the film’s first half largely accompanies performances, whereas in the second half it often takes the form of lengthy suites that punctuate the action. And then there was the random Mussorgsky phrase the composer slipped into the score as the companions infiltrated the witch’s castle. All in all, it was a totally unique experience.

Mostly, though, I came away surprised that it took so long for someone to create a video game based on the movie. It’s basically the RPG archetype, all the way down to the dude who handed out annoying mandatory fetch quests.