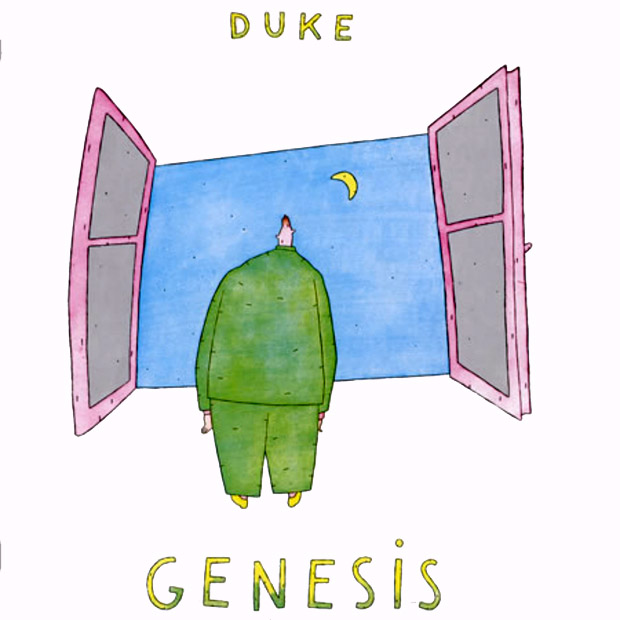 Genesis’ 1980 album Duke featured the band at the precipice of a new decade, having recently been trimmed down to a trio from a quartet (and a Peter Gabriel-led quintet before that). Fittingly, the album features a different sound for the group; it’s actually more “progressive” than their prior album in the sense that the songs are lengthier and more focused on instrumentals, although generally speaking the actual structure of Duke‘s selections are more traditional rock than …And Then There Were Three… cuts like “Burning Rope” and “The Lady Lies.”

Duke was a kind of awakening for my ears when I first heard it. I’d picked up a few Genesis albums but everything prior to 1983’s eponymous album was insanely difficult to find where I lived. Believe it or not, before the spread of big box stores like Best Buy, most cities didn’t have much in the way of musical selection outside the Top 40 picks. Here, let me blow your mind: For a few years in the early ’90s, when Best Buy first hit the scene, it was an amazing resource for hunting down hard-to-find CDs. They used to have crazy-obscure prog rock cuts, like Hawkwind albums that I’ve never seen in stores since. Eventually the chain settled down into hawking mundane popular hits, but it was an invaluable resource for finding good music up until, say, 1995 or so.

Anyway, Duke was one of those albums I hadn’t been able to find previously. I put it in expecting… I don’t know, something. And it knocked me over. Its sound was amazing — expansive. Producer David Hentschel created a much broader and more open atmosphere than the Hugh Padgham-produced records that followed and made the band an ’80s sensation. The drums here weren’t as loud, the bass not as aggressive; instead, the band played more in the middle-to-high range, blasting a virtuosic noise that seemed to come from a much larger band. Phil Collins used heavy vocal processing here for perhaps the first time, especially notable on the incredibly broad “Man of Our Times.”

How can you listen to that and not feel chills? Seriously now. It’s like being telephoned by a rock band from another planet during the prime of their best-ever jam session. So good.

But what does this have to do with comics, you ask? Well, in true progressive style, there’s a nebulous hint of story to this album: A man named Duke, seen there on the cover and in pieces of spot art scattered throughout the pages bound into the record sleeve. The album opens and closes with bookend instrumentals, the latter of which are called “Duke’s Travels” and “Duke’s End”; these culminate in a reprise of the opening instrumental of the first track, “Behind the Lines,” right after a chilling expansion of the enigmatic “Guide Vocal” that closes the opening suite. All told, it’s about 20 minutes of segues and parallels — roughly half the album, and probably the last truly progressive composition Genesis ever put together.

At the same time, the album paints a clear picture of where the band (and Collins in particular) would be going over the course of coming decade with a handful of short, crisp, radio-friendly tunes. But good radio-friendly tunes, including the retro-sounding “Misunderstanding” and the anthemic “Turn It On Again.” Perhaps best of all is “Please Don’t Ask,” which might actually be the only truly heartfelt song ever penned by Collins. Like “Misunderstanding,” it chronicles a failing relationship but doesn’t hide its frustrations behind upbeat pop; rather, it’s a slow, mournful ballad that encapsulates all the resentment, remorse and loneliness of a divorce. In the course of just a few verses, Collins snarls at his ex-wife’s overtures of peace, mopes behind false cheer, longs for reconciliation and vows to keep it together for the kids’ sake. It’s sad rather than schmaltzy, and kind of makes you wish he could have held on to his bitterness for a lot longer — it would have made his solo career a lot more tolerable.

Although his solo career did kick off a year later with a funky, R&B rendition of “Behind the Lines,” so at least it got off to a good start.