I’m doing the Trek Trek thing a little out of order, because my coworker Mike lent me his sampler of the remastered Next Generation Blu-rays. This marks the first time I’ve watched the pilot episode, “Encounter at Farpoint,” in about 15 years. 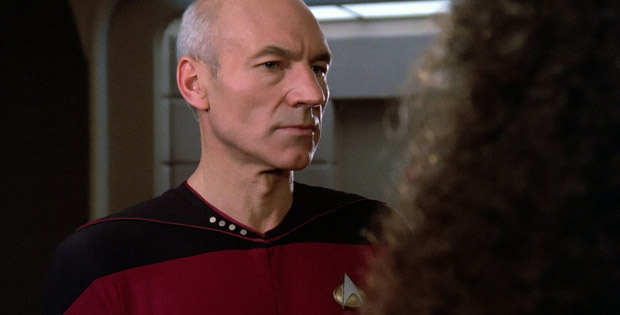 Also, what the hell, Patrick Stewart was only 10 years older than I am in this episode? Some people just never look young, I guess.

Even though “Farpoint” kicks off with an alien encounter and chase sequence, it lacks the slightest scrap of tension or excitement. I know, I’m spoiled by modern television and effects, but yeesh. Splashing red light across a bunch of people in space-age uniforms as they sit around in what looks like a hotel lobby and read off data on the threat at hand ain’t exactly gripping.

Also, I know it’s stupid and nerdy, but it really bugs me that the numbers they’re rattling off during the chase sequence don’t make any sense. “Captain, we’re at warp 9.4… and they’re at 9.7! If we stop and sit still in space they’ll catch up with us in minutes.” But… but isn’t warp a logarithmic scale!? Where each tenth of a point represents a doubling of speed!?

Someday, someone will write a science fiction and actually pay attention to their own rules. And it will probably be even more boring than “Encounter at Farpoint.”

On the plus side, it’s pretty rad to see The Fear exchanging tense pleasantries (and fruit) with Commander Riker. Remember, Commander, if you let the fruit go bad and then drop it on the ground, you can get a stamina-based victory when he comes down from the tree to eat it!

8 thoughts on “Encounter at Farpoint”