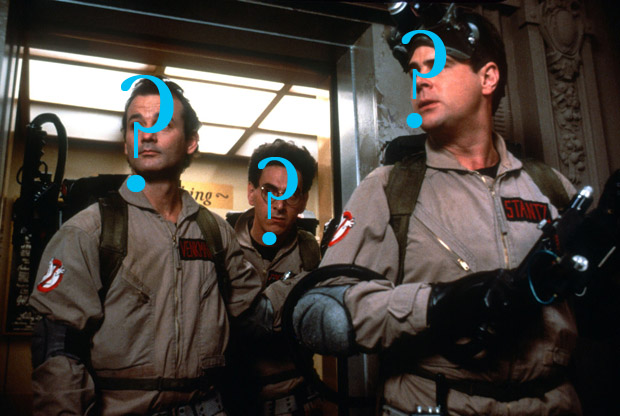 I made Cat watch Ghostbusters for the first time last night. She seemed amused but didn’t love it quite as much as I feel is appropriate — I mean, come on, it’s one of the funniest movies ever. Though I’ve seen it enough that on this viewing (probably my dozenth), what I enjoyed most was soaking up all the mid-’80s pop culture (“…and now, on with the countdown”) and connecting the dots to all the Mad Men I’ve seen this year. 1986 marks the midpoint between now and 1960, and it was interesting to see little hints of that vanishing middle-century America in the background — pieces of furniture, older ladies dressed in their hats and greatcoats, round and massive steel cabs, etc. We have a tendency to think of the past in discrete chunks (breaking it into artificial divides like decades and whatnot) but it’s actually much more interesting than that: A spectrum into which new elements are introduced as old ones gradually fade away.

Cat, however, seemed more interested in casting a remake of the movie with contemporary stars. I have to admit, she actually did a pretty great job. I’m averse to Hollywood remakes, but since Bill Murray is too busy golfing to join in for a Ghostbusters sequel (and I question Ivan Reitman’s ability to create a comedy after that stupid movie with David Duchovny), a remake would be OK, I guess.

Peter Venkman: Robert Downey, Jr. Although he’s about a decade older than Murray was at the time of the original film, he’s the only actor we could think of with the appropriate swagger and comedic timing yet who isn’t too handsome (as would be the case with, say, George Clooney).

Ray Stantz: Jason Segal. Doughy guy with a sufficiently childlike perspective to buy a near-condemned firehouse because sliding down the pole is so neat? Yeah. Segal.

Egon Spengler: Daniel Radcliffe. Seems like a weird pick, right? But no, think about it. What other nerdy-looking actor can you think of who takes himself a little too seriously? And the Big Bang Theory guys don’t count, because they are inhuman monsters who exist to destroy human happiness, not actors.

Winston Zedmore: Wanda Sykes. Cat wanted to drop this character because he’s pretty useless as written, but I convinced her otherwise. So instead she decided to cast someone punchier, and female. Wanda Sykes is great at the sort of reactive role that Winston embodied and wouldn’t fade into the background like Ernie Hudson did.

Dana Barret: Cat’s pick was Liv Tyler for her slightly gawky demeanor, but I had to disagree; my choice would be Catherine Zeta-Jones. Even though she’s entirely too beautiful to parallel Sigorney Weaver’s lanky, slightly mannish appearance, she has the ability to go from a straight demeanor underscored with a touch of humor to flat-out weird: Essential for the role.

Louis Tulley: Seth Rogan? I don’t know. No one really does the over-the-top nerd schtick anymore, so gormless doofus seems the closest thing.

Walter Peck: Jesse Tyler Ferguson, who appears to have been cloned from the original actor and whose Modern Family person is basically a more nebbish take on that same high-strung personality.

Gozer: Either David Bowie or Lady Gaga… or better yet, both, combined into some sort of Brundlefly abomination.

OK. I’m done. I promise not to make a habit of recasting movies; I am simply relaying information.