Mad Men: They didn’t play by the rules 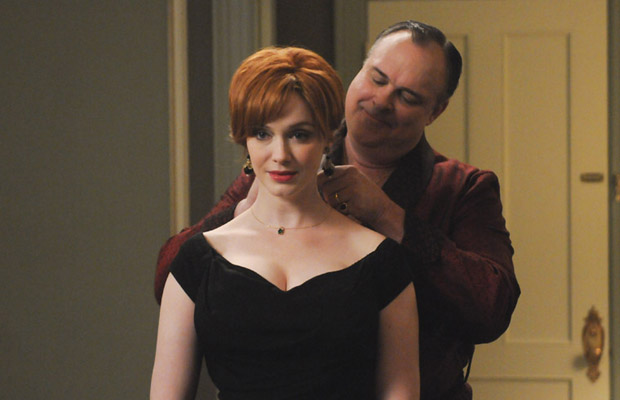 Last night’s episode broke the rules of television. They’re not supposed to radically change the status quo until the end of the season. “The Other Woman” shook things up as much as any episode since the end of season three, when the heads of Sterling Cooper went rogue and created their own new agency. But we still have two episodes to go this season; I assume that means we’re in for two hours of Don Draper sitting and looking morose.

After the episode ended, my wife immediately watched it again in the standard-definition repeat airing… and then again in the HD repeat. And each time, she cried at the final scene between Draper and Peggy Olson; it was one of those episodes. Personally, though, I found the scene in Joan’s apartment more crushing the second time through, knowing the full truth of the situation. The point is, it was an episode that didn’t pull its punches; and while its impact could easily be brushed off as mere soap opera melodrama, it had a larger point to make about both the characters involved and the fact that, for all the real-world changes that would be ushered in by the year 1967, this first episode (I think) to be set fully in that year demonstrated just how far society’s archaic attitudes toward women still had to go to drag themselves out of the mud.

What I really admire about this show’s writing is the way it can pile parallel and thematically linked plot lines together into a single episode without feeling forced. “The Other Woman” revolved around the theme of women advancing themselves and men’s desire to control them, and seeing so many converging instances of related character moments for most of the show’s major female player come together at once would feel horribly contrived if not for the fact that each and every one brought long-running story threads to fruition: Peggy’s exasperation at being treated as a whipping boy (as demonstrated by Don’s tantrum after they failed to impress Mr. Belding with their bungled Kool-Whip pitch); Joan’s determination to go it alone without her miserable excuse for a husband; the company’s eagerness to land a car deal; Megan’s desire to balance domesticity and independence; Campbell’s tendency to leave a trail of slime wherever he skulks.

In Don’s rally-the-troops talk at the end of last week’s episode, he proclaimed that, “An ad agency is defined by the moment it lands its first car account.” From that, we can define Sterling Cooper Draper Price as detestable. Their Jaguar pitch is predicated on the idea that men are frustrated that they can’t literally own women; the sale is made by demonstrating that — with the appropriate incentive backed up by the implicit threat of job loss — maybe women can at least be rented. SCDP’s hard-working and naturally talented head copy writer, who worked her way to the top despite all the barriers in place to women’s advancement in the company, watches through glass as her male coworkers eat lobster and brainstorm car ads, leaving her to handle the day-to-day of every other account, abandoned in favor of pursuing a car company. Draper sees her as selfish and money-obsessed, both literally and figuratively throwing money in her face — first in contempt, then in entreaty — when what she really seems to want is the recognition and respect her less capable male peers command so easily. Campbell contrives to prostitute one of his own coworkers before heading home and trying to convince his wife to allow him to rent a Manhattan apartment, essentially asking her to bankroll a love nest where he can cheat on her at his leisure (his own “other woman”). The company’s senior partners quietly conspire to go along with Campbell’s plan to trade Joan’s body for a shot at Jaguar behind Draper’s back while pretending to wash their hands of any guilt, in the process making the man who actually threw money at a woman before shouting at his wife for her intention to go on tour with a theatre troupe into the most chivalrous and admirable male figure of the entire episode. The look on his face when Joan walked into the partners’ meeting was crushing. Yet that’s still not to say he’s particularly admirable. There’s little wonder Don liked Ginsberg’s final concept for the Jaguar pitch, that the car could be a beautiful possession for the bored man who has everything but can’t totally dominate the women in his life: The pitch was describing him.

And so, a massive change in the status quo as Peggy walks out the door, Thermos in hand, quietly leaving behind a devastated Don and an enigmatic glance from Joan (possibly a look of envy at Peggy’s newfound freedom from the company she herself had just tied herself to with her pound of flesh, as it were). Mad Men‘s pilot centered on Peggy’s first day at the company, and much of the series has followed her hard-fought rise to the top. I’m curious to see what role she’ll play in the series now that she’s left the agency where the bulk of the narrative has been set this season, or if she’s gone entirely; Don did vow that if she were to go to work elsewhere he’d spend the rest of her life trying to hire her back, after all. But I don’t think she’ll head back to SCDP… though that may not matter if the entire company collapses thanks to its CFO’s skullduggery, I suppose.

3 thoughts on “Mad Men: They didn’t play by the rules”