Remember Trek Trek? Yeah, that is still A Thing. It simply went on hiatus for a while as I worked my way through Farscape; and now I am done with that show, so it’s on to Season 2 of Enterprise and other, savorier pursuits at a later time. 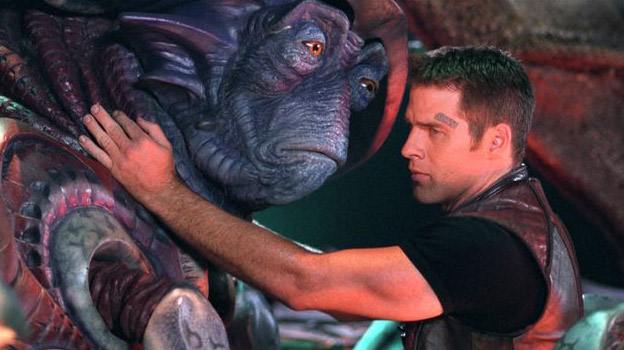 Farscape was an interesting show. It gradually evolved from “cheesy TV sci-fi with an edge” to “edgy TV sci-fi with a heart.” It managed to subvert a lot of bad TV writing habits (for instance, the lead character hooked up with his romantic interest fairly early on but they didn’t immediately become an item) while succumbing to plenty of others (the writers’ obsession with making Crichton a “relatable everyman” by having him reel off pop culture references the viewers would enjoy never ceased to grate, though the 2001 payoff at the very, very end of the show was pretty great). The CG special effects were uniformly terrible, while the old-school animatronics were often quite remarkable (though just as often not on the monsters of the week).

On the whole, not bad! I don’t know that I’ll ever watch the series again, if only because I’ve seen enough of that half-lizard alien overlord in bondage gear to last a lifetime. But it was fun while it lasted.

8 thoughts on “Trek Trek: The revengeaning”