FashionSpite: Mad Men or whatever

So, you know, I lost some weight a while back, and then I started dressing better, and then I started dressing a lot better once Cat introduced me to hats and I realized I couldn’t go around wearing a hat without clothes to match. This has been established. I quickly found myself annoyed by people’s frequent smirking comparisons to Mad Men — all the Hey, you’re wearing a tie, jacket, and hat, you must wanna be Don Draper! remarks, when I had never watched the show and had no idea who Don Draper was.

Now that I have watched the show, I’m even more annoyed. Mad Men is incredibly good, and the characters in the show dress incredibly well. But geez, the idea that simply donning pieces of clothing from a few broad categories of apparel creates an instant similarity is kind of… well, I guess “dumb” is the word I’m looking for. Never mind that I have very different and very personal reasons for dressing up. It’s like saying “Hey, you’re wearing a hat and a scarf, you must want to be Doctor Who!” (Sadly, on cold days, I hear that particular gem a lot, too, despite the fact that I’m pretty sure I have never looked like a Welshman cosplaying as a scarecrow.) The most prevalent men’s apparel in Mad Men are suits, often three-piece suits, with classic broad-brim fedoras. I certainly wouldn’t mind dressing like that, but I could never even begin to afford the quality of goods you see on the series.

Nah, I just wear slacks, occasionally paired with jackets — never matched jackets, though, only separates. Many of the jackets I wear are cotton and can’t be paired with ties. I never wear broad-brimmed fedoras, because any man who wears a fedora in this day and age runs the risk of looking like he thinks he’s Indiana Jones. I never wear plain white shirts except on formal occasions, like getting married or something. You know how people who don’t understand video games assume something like Mass Effect is basically just Super Mario Bros.? Conflating the wardrobe I’ve accumulated with Mad Men‘s style is essentially the same mistake in reverse.

The funny thing is that before I started watching the show, I bought a hat called the “Mrs. Draper” — a weird name, not only because it’s a men’s hat, but also because it doesn’t look the least bit like anything I’ve ever seen in the show: 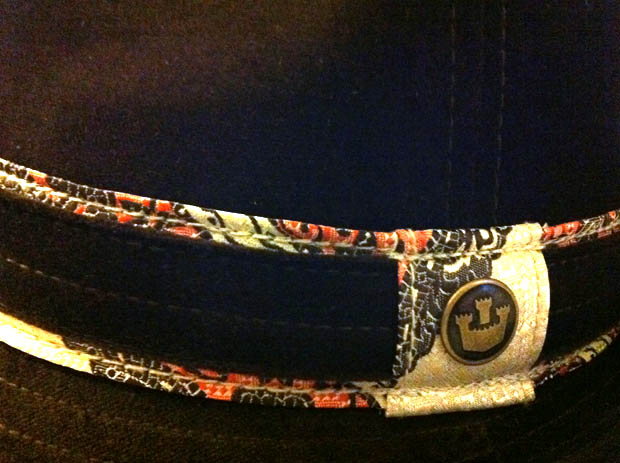 (It’s a short-brimmed high-crown trilby with a velvety brown poly/cotton exterior and a orange-and-white paisley wraparound interior and matching band. You can bet your sweet bippy I didn’t wear that one while I was in Texas last month.)

One thing I really love about Mad Men is that even though all the men wear generally similar outfits — suits — the specifics of their respective wardrobes reflect their personality perfectly. Don Draper is always super sharp, put-together, and modern — except in flashbacks, where he’s often seen in incredibly tacky suits with metal-flecked thread and cheap shirts. Roger Sterling sports a more traditional look, donning a vest or waistcoat beneath his jacket. Bert Cooper is an eccentric and tends to dress down despite ostensibly dressing well; he’s one of the few you see in separates and even without a jacket or vest. Salvatore Romano’s closeted sexual orientation is subtly hinted at in his preference for colorful accents and the European mode of his apparel (giving him a unique style until the British characters show up). Pete Campbell has the preppy look of old money with a touch of tackiness to reflect his overconfidence (or overcompensating for a lack of confidence). I’ve discovered over the past few years just how many shades of variety there can be in nice, seemingly uniform styles of dress — I’d say “belatedly,” but I guess it’s not something that we bumblers in the middle class really know about these days, so we’re all outsiders.

If it seems strange that I’m writing about this, because it seems nitpicky and pointless and completely beside the point of this site, I apologize. But you know, my secret goal is to quietly tempt everyone who reads this site to slowly gravitate away from the modern American uniform of T-shirts to… well, to whatever you want. Make your own style! It’s OK for nerds to dress well. And if you want to do that, you gotta transcend simplifications and generalizations.

22 thoughts on “FashionSpite: Mad Men or whatever”