BakeSpite: French cooking isn’t as impossible as it seems

French cuisine! The concept sounds so intimidating. Cat and I have tried it from time to time, having experienced decent success with boeuf bourguignon and, uh, wine and cheese. But never have we tackled such a madly ambitious meal as we prepared for Valentine’s Day: Ratatouille, penne gratin, and chocolate truffles. Happily, the results turned out, pleasantly enough, to be practically perfect.

Ratatouille is actually not nearly as difficult as it seems. It’s basically a whole bunch of vegetables stewed together. As a colloquial favorite, ratatouille can be made many ways. You can do it as a super-fancy casserole as in the movie by the same name, thinly slicing the vegetables and baking them. Or you can do it the way our recipe (taken from a French country-style cookbook) called for: Thinly slice up the veggies, then throw them all together in a large skillet (we used a gigantic paella pan) and stew them. The only real trick to ratatouille is cooking the ingredients in the proper order, since different vegetables cook down at different rates. The onions went in first and cooked longest, while the tomatoes went in last.

What this creates is a colorful, delicious, flavorful dish. Healthful, too: It’s nothing more than several pounds of simmered vegetables with about a teaspoon of salt and a fair amount of olive oil mixed in throughout the process. We ate it over steamed rice. It was awesome. 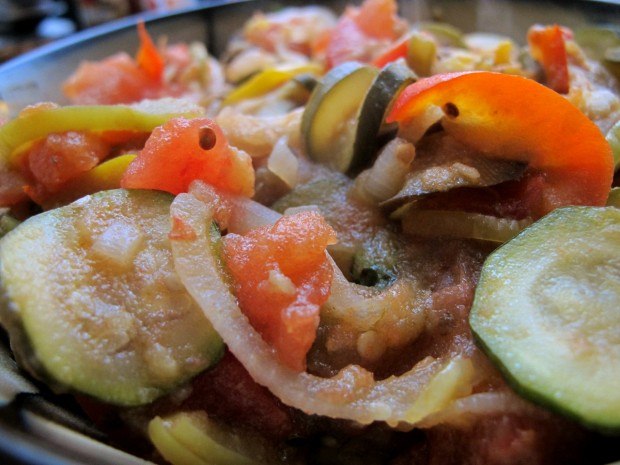 Fortunately, we dabbled in the decadence of Valentine’s with the side dish, a casserole of penne gratin. This was pasta, cream, butter, plus a dash each of flour, salt, pepper, and a few other spices. Then we topped it with half a pound of shredded gruyere. Good for the waistline? Uh, no. But delicious? Oh, man, yes. 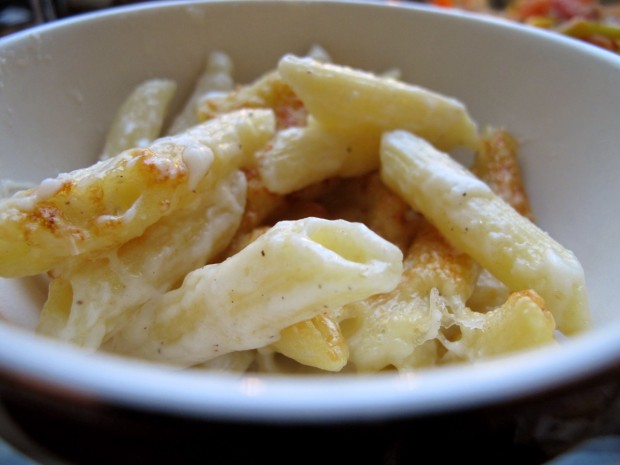 Good lord, just look at all that fatty wonderfulness.

Speaking of fatty… we made our own truffles. This involved a ridiculous amount of additional butter and cream, plus a copious amount of chocolate, and… a 250 mL of my favorite wine in the world, Domaine Charbay’s 2003 Cabernet Sauvignon. It was our last bottle; I’d been saving it for a special occasion. This qualified as precisely that, and we sacrificed a third of it to create these. 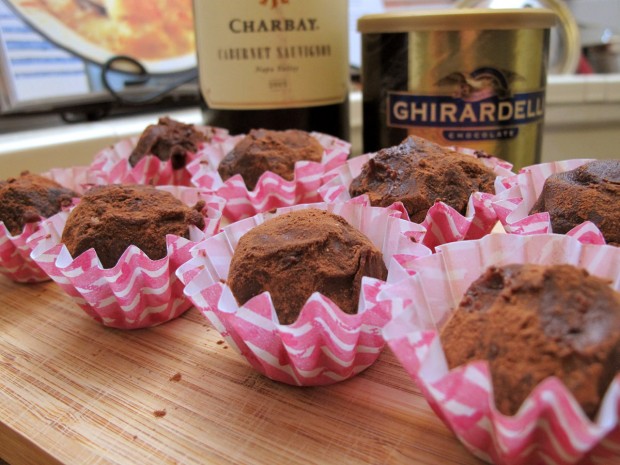 So worth it. I am a chocolate addict, and I’m a big ol’ snob about it. This ranks among the best chocolate I’ve ever eaten… and I’ve eaten a lot, which is why I spend 45 minutes exercising almost every evening. Cat found it a bit too sweet, but I don’t have any complaints. I like my chocolate both bitter and sweet, and the sweetness of the truffles was nicely balanced by the bitter of the cocoa we rolled them in. They’re almost perfect: Your first sensation is pure bitterness as you taste the cocoa, but then the sweet taste of the inner truffle slowly melts through and blends with the cocoa. A moment later, the chocolate begins to warm on your tongue, and the fruitiness of the reduced cabernet blooms and you experience the full breadth of the truffle’s flavor.

All of this took about three and a half hours to make, and it was time well-spent. Way more satisfying than going to a restaurant, that’s for sure.

9 thoughts on “BakeSpite: French cooking isn’t as impossible as it seems”