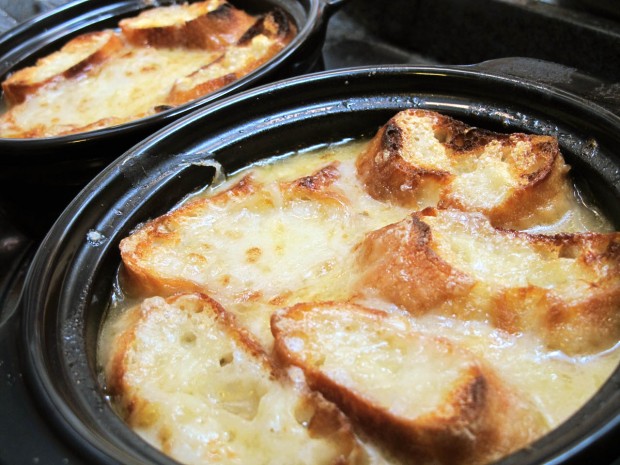 The savory broth, the caramelized onions that practically disintegrate as they cook, the toasted topping of bread and cheese… so good. We made some today. It was… so good.

Well, mostly Cat made it. The process involved chopping and sautéing about three pounds of onions, running out to a local market to buy little oven-safe bowls as the broth simmered, and sticking said bowls into the weird little fiery panel at the bottom of the stove. The results, however, were… so good.

In its best form, French onion soup is based on a stock made from beef bones; we didn’t have that, so we went with a chicken stock instead. The soup probably could have simmered a little longer, too, as the sherry didn’t quite reduce down as much as it should have… though you’re never going to hear me complain about having a little extra sherry in a recipe. Since it wasn’t “true” French onion soup, we decided to San Francisco it up by using a sourdough baguette rather than standard white French bread; this was balanced by the use of traditional gruyere cheese on top.

The cheese and bread sit on the surface of the soup, and you place the soup bowl in the broiler for a few minutes to turn it golden brown and deliciously crusty. You can buy French onion soup mix, but that stuff is a lie. Without all the awesome fattening tastiness on top, it’s just a feeble imitation. 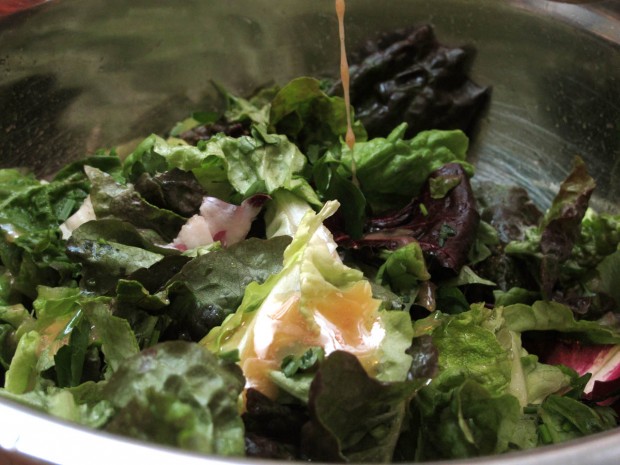 We decided to go true French style with a mixed greens salad (including diced chives and parsley) with radicchio and a glass of the Baldovino wine that arrived last week in the first shipment of the wine-of-the-month club Cat got me for Christmas. It made for a much-needed break from the crazy non-stop work I’ve been doing this weekend in preparation for tomorrow’s Vita pre-launch madness.