You know how I can tell my wife loves me? (I mean, besides her telling me and all.) I know because she sometimes bakes black-bottom pie for me. Even though I’m trying to eat healthier. Even though I want to shed my holiday pounds. But it’s love, see, because she knows this was always my favorite dessert growing up. 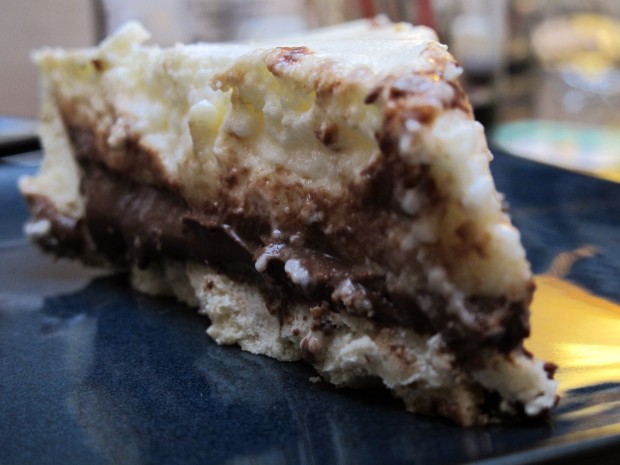 She makes it a little differently than my mother does; the chocolate’s less dense, and she heeds the part of the recipe that calls for a little alcohol. Well, not this time; the recipe calls for rum, but we didn’t like the way that tasted, so the next time she used Cointreau, which added a nice chocolate-orange flavor. But we don’t have Cointreau right now, so she substituted raspberry extract. This worked pretty well. In fact, I would go so far as to classify it as “delicious.”

I didn’t realize until I told her about it that “black-bottom pie” is very nearly the most unappetizing name I’ve ever heard for a dessert. Sure, it’s a step above “spotted dick,” but only barely. She recoiled at the mention of it for years before finally giving in and making it — at which point she fell in love with it. And she doesn’t even share my crippling addiction to chocolate (because we habitually get our gender role stereotypes mixed up). It’s simply called “black-bottom” because the bottom layer is a dark chocolate ganache topped with a custardy meringue. See! It’s logical! Also tasty.

If I’m not mistaken, black-bottom pie comes from the Better Homes & Gardens Cook Book. I recommend it. Unless you hate chocolate, in which case… get the hell away from my website, you monster.