RockSpite: Fly From Here by Yes

Last week I wrote about classic Yes (not Classic Yes); this week, it’s time for a look at new Yes: 2011’s Fly From Here. I do hesitate to classify it entirely as new, given the weird history surrounding this particular work. It’s new, but only kind of, and it aspires to be redolent of the old, from the top-notch Roger Dean cover painting to the sound and structure of the whole thing. Yet it’s such a well-crafted facsimile of old-time Yes that I find myself struggling to be too critical of the thing. 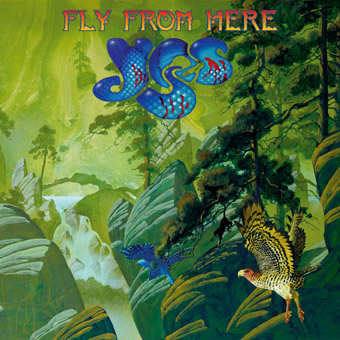 Fly From Here was published last summer, but I didn’t realize it was a new album until some time later. Why not? Well, I’d heard Yes vocalist Jon Anderson had been forced to retire for health reasons and wasn’t expecting the band to produce anything new without him, and also because “Fly From Here” was the name of a song that appeared on a live Yes compilation box set several years ago. Combining these two facts, I (naturally, I think) assumed this was another repackaging of live rarities that included previously compiled material such as, obviously, “Fly From Here.”

I was mistaken on both counts. Fly From Here is a new studio production, and Anderson was not involved in it in any way. However, it does include previously compiled material such as, specifically, “Fly From Here.” As it turns out, Fly From Here is tied closely to Yes’ oddest duck of an album, Drama (which I’ve written about, as those of you with elastic memories may recall): It was produced by Trevor Horn, who led The Buggles before singing lead on Drama, and Geoff Downes (also of The Buggles and Drama) sat in here as keyboardist. But more than that, the title track — the centerpiece of the album at roughly 23 minutes long — is a piece salvaged from Horn’s unpublished back catalog and fleshed out into new form. The song was original created in two parts of roughly four minutes apiece as a Buggles B-side, which Yes then performed live during the Drama tour but never placed on record until the aforementioned box set from a few years ago. The new “Fly From Here” is considerably expanded and enriched, a multi-part epic in the style of “Close to the Edge,” with refined instrumentation by standbys Steve Howe, Alan White, and Chris Squire that makes it feel more Yes-like than the post-punk rendition The Buggles shelved 30 years ago.

Honestly, given its weird history, the whole thing should come off as an empty, cynical waste… but it doesn’t. On the contrary, this newly constructed take on “Fly From Here” is the single best thing Yes has put together since… god, I don’t know. “Aim High, Shoot Low” from 1987’s Big Generator? “Hearts” from 1983’s 90125? Drama? The band has taken a few stabs at producing these epic-length productions over the past 15 years, but they’ve been pretty terrible. The title track from Magnification was the most recent, and it was a plodding, sluggish mess. “Fly From Here” isn’t perfect — the sharp, upbeat section toward the end before it explodes into a final reprise of the main melody is pretty grating in that cheesy way that Yes-come-latelies like Dream Theatre tend to gravitate toward — but on the whole it’s a rich, atmospheric song that creates a mood reminiscent of classic tracks like “Awaken.” Yes is an acquired taste to be sure, but if you like their trademark sound, this piece is pure ear candy.

The rest of the album isn’t quite up to this standard, unfortunately, but it’s not terrible. The two tracks immediately following “Fly From Here” are pretty cheesy, but the band eventually recovers with the simpler, more melodic “Hour of Need” and a not-just-five-dudes-soloing instrumental called “Solitaire” before ending with a fairly lengthy and fairly vigorous piece called “Hour of Need,” which I like simply for the fact that it brings back the harmonized bass sound Squire used for the brilliant “On the Silent Wings of Freedom.”

By mass, I’d say Fly From Here is about 50% excellent and only around 15% cringeworthy, with the remainder falling into a comfortably listenable middle ground. That’s a pretty good balance of content for any band, but especially one that’s been around for something like 45 years. Holy crap! These guys are old. The YouTube footage I’ve seen from their most recent tour shows them a lot slower and sloppier than in their prime, but I sure would love to be is such good form when I’m 65.

I don’t know what Yes’ future plans are, but if they were to announce their retirement tomorrow I wouldn’t complain. Not that I think the guys should hang it up; it’s just that “Fly From Here” is good enough to qualify for “swan song” status. I can think of worse notes to go out on.

2 thoughts on “RockSpite: Fly From Here by Yes”