Last week was a rough one, so by the end of it my family and I (by which I mean wife and parents) needed a little bit of a break. The problem is that Lubbock, Texas is not really a city known for awesome events and destinations, unless you like collegiate sports or rodeos. So, we decided to head a little ways out of town to the Llano Estacado winery.

I’d heard good things about Llano Estacado, and I enjoyed the tour of the facility (the guide explained far more about the winemaking process than any winery I’ve toured here in California; I suppose here they just assume you know). The pleasant surprise was the tasting afterwards, which gave us a sampling of several different kinds of wine, many of which were quite good. Granted, I wouldn’t rank anything I tasted there among the best I’ve ever had, but I’ve certainly had much worse wine via well-regarded vintners up in Napa. I’d call it a win. (“Win” is “wine” without the “e.” Let that be a lesson to you if you were planning to dose up on Ecstasy while quaffing a Chianti.) 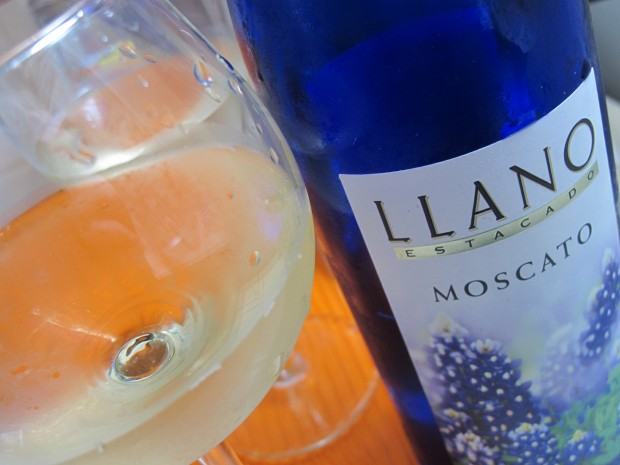 We brought home a bottle of Cat’s second-favorite vintage from Llano Estacado. Her favorite — which I also really enjoyed — was Viva Rosso, an unusual blush dessert wine that packed a sort of natural carbonation, making it a bit like a champagne/sparkling wine but with a completely different flavor than you expect from those varietals. Unfortunately that mild natural carbonation makes it ineligible for interstate shipping because apparently it causes the bottles to run the risk of exploding in flight, so we decided it was probably best not to risk it. We went with the Moscato instead.

I’m not much of a fan of white wines, and I generally steer clear of dessert wines, but I have to hand it to Llano Estacado: They make a good one. The problem I have with dessert vintages is that they tend to be heavy, almost syrupy, and entirely too sweet. The Llano Moscato, however, is light and crisp, and the sweetness is just enough to counter the “sour grape juice” sensation that I usually take away from whites, especially something like Chardonnay. Would drink again, which is more than I can say for most wines of this type.

The really nice thing about Llano Estacado is that the pricing of its vintages reflects what the market will bear. Lubbock isn’t really a wine town; it’s more a Michelob and Bud Light kind of town. So where most Napa/Sonoma wineries would probably charge $25-30 for a bottle of this quality, secure in the knowledge that Californians simply expect to pay dearly for a good selection, Llano prices this at $10.

Anyway, if you ever happen to pass through West Texas, stock up! It’s cheap yet good, the elusive perfect combo of wine attributes.

This post encompasses pretty much the extent of my ability to write about wine. Wine for me is like art for Gelett Burgess: I don’t know anything about it, but I know what I like.