RockSpite: Close to the Edge by Yes

I’ve added yet another new category for the blog. I hope we can still be friends. 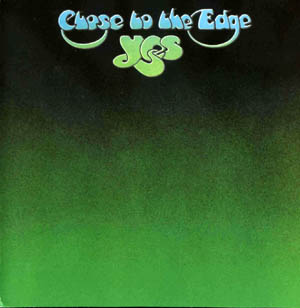 I first became a music enthusiast (as opposed to a dude who listened to whatever came on the radio and was happy about it) at a weird time of transition for the music industry. CDs hadn’t yet become universal, yet vinyl LPs were fading from sight. Tape cassettes enjoyed a brief day in the sun, and archival releases in that format were universally terrible. I remember buying nearly half a dozen different used copies of Genesis’ Wind and Wuthering over the space of a couple years that all had the worst imaginable tape warble; decades later, I still hear those shuddery defects even when I listen to perfectly remastered CD releases.

Back catalog cassette releases were produced on the cheap, which meant that their inserts were usually only printed on one side. Basic information like names of band members, composition credits, and instrumental roles were missing in action, to say nothing of the elaborate art that had graced those albums’ vinyl sleeves. I was often left wondering about the music I was falling in love with — who made it? What was it about? Fortunately, I was occasionally able to turn to my mother’s vinyl collection and learn about the albums that way.

Close to the Edge was one of the records she owned. But I learned nothing about it. Why? Because it was deliberately enigmatic. The cover was simply a deep green fading to black. The interior didn’t include bios or essays or photos of the band or thoughts on the recording process. Instead, the green sleeve opened to reveal the following mysterious gatefold image:

Intriguing, but meaningless for the young man in search of facts.

The music itself is exactly matched to this packaging. Dense, abstruse, ineffable. Close to the Edge contains three songs: The title track (comprising one entire side of the vinyl) along with “And You and I” and “Siberian Khatru,” each of which is a roughly nine-minute-long exercise in, well, being Yes.

A friend of mine once described Yes as five guys playing solos all at once, and “Close to the Edge” embodies that definition. It begins with a bit of ambient environmental sound — birds and waterfalls — before Steve Howe launches the track into full strength with an expansive guitar phrase that immediately blooms into a solo accompanied by the rest of the band edgily supporting but clearly champing to bust out into solos of their own. They do precisely that about a minute later as the tempo changes and all four instruments begin working kind of together, but kind of not together, and Jon Anderson begins singing.

If you want to call it singing, I mean. It’s vocalizing, definitely, but the lyrics don’t seem to mean anything. “A seasoned witch can call you from the depths of your disgrace/And rearrange your liver to the solid mental grace/And achieve it all with music that plays quickly from afar/And taste the fruits of man rewarded losing all against the hour.” What does that mean? (Besides, “Whoa, man, LSD is super trippy”?)

“Close to the Edge” is a song divided into movements, a common practice in the heyday of album-length songs due to the record companies’ practice of paying artists royalties by the track; by “breaking” an 18-minute piece into four passages (denoted by those wide bands on the vinyl), the artist could make four times as much money… or rather, the same amount of money for work equivalent to creating four individual songs. That being said, “Close to the Edge” definitely is divided, with the near-cacophonous introduction eventually melting away to a quiet passage of complementary vocal parts accompanied by Rick Wakeman’s rhythmic cathedral organ. The organ builds to a crescendo before crashing back into the full band’s reprisal of the rock fury opening, which finally dissipates and drifts apart, leaving only the environmental sounds that led into the song.

It’s really good, but definitely offputting for anyone who isn’t accustomed to lengthy, baroque, cathedral rock compositions. The first time I heard it, I felt like I’d just opened the door to a bizarre alternate universe where music wasn’t constrained to shapes even vaguely resembling anything that could ever appear on the radio.

The two songs on the flip side of the album are a little more cohesive. “And You and I” is structured a lot like “Close to the Edge,” but it’s far more approachable. It’s much more gorgeous, too, if no more lyrically coherent:

And finally, “Siberian Khatru,” which runs at full throttle from start to finish and showcases the band’s ability to rock out in concert. It’s not one of my favorite pieces by the band, but it’s still pretty great.

Occasionally I like to go back and listen to Close to the Edge with fresh ears, and I can still feel the sense of wonder and mystery that the album instilled in me. I still recall wondering at the inscrutable album art. I still hear the slight tinniness of my mother’s 33 RPM version of the album as I sat before my hand-me-down record player. This is a pretty great album; a pinnacle of progressive rock. What do you mean, that’s not great? That’s totally great. Get your priorities straight, dude.

13 thoughts on “RockSpite: Close to the Edge by Yes”