The personal in personal style

My grandmother’s passing was unexpected, and it was heartbreaking in its suddenness; I missed seeing her one last time by a matter of hours. I’m still having trouble believing she’s gone, because she’s been an enormous presence in my life since the beginning: Ever more diminutive in stature as her extreme arthritis ravaged her limbs and caused her to shrink from a height that even in her youth never quite reached five feet, but a towering pillar of charity and love not only to her family but to all around her. The truth is, I had planned this trip with the intention of seeing my grandfather for very likely the last time, assuming my grandmother — ever the fighter — would be around for a while longer even as Alzheimer’s takes its toll on my grandfather. I suppose the one upside to her loss is that all the family activity around Grandma’s memorial has helped him cut through the fog of illness and be himself, something all too rare in recent months. Needless to say, I’m soaking up every minute of my time with him, every snatch of conversation we share. 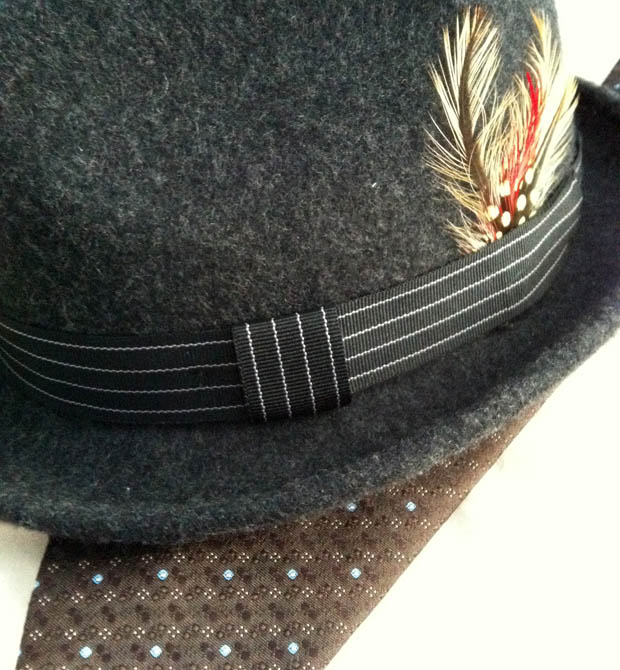 I take a lot of crap from people who think I’m pretentious for having taken to wearing a hat over the past year or so, but those people are cordially invited to to shove off. They don’t know the reasons behind the change, and frankly they don’t deserve to know. The hat here is the one that started it all; Cat found it as we were walking through Nolita while spending Thanksgiving 2010 in New York. She and her brother encouraged me to try it on, even though I figured I’d look like a complete twit in a hat. I put it on despite my misgivings and they both assured me it worked. I checked a mirror and sure enough, it actually looked OK. Later, I saw a photo of myself and realized why it worked: I looked an awful lot like my grandfather.

Grandpa always cut a dapper figure. It’s something of a generational thing, of course, but even after other men his age had abandoned wearing a proper hat and dressing well, he continued to cover his head when he went out, to wear French cuffs, to don slacks. Even after he retired — and really right up until the past few years, where his health has diminished — he continued to dress in a nice shirt and slacks to do nothing more than sit around the house and nap in his favorite chair. When I see myself in a hat (and, subsequently, in dressier clothes to properly match my headwear, because wearing a hat so nice with a screen-printed T-shirt would make me look like a twit), I see him reflected. I remember always being able to tell if he and my grandmother were at church when I arrived late, because his hat would always be sitting by itself atop the coatrack in the entry vestibule.

I was told that Grandpa recently saw my favorite portrait of Cat and me from our wedding, the one in which I’m standing slightly to the back in a suit and the hat, and asked, “Is that a picture of my father?” I gave it a closer look, and I really do look a lot like my great-grandfather in his younger days there. (No doubt Grandpa was also wondering why his father had posed in a suit with a lovely Vietnamese lady in a beautiful dress.) It’s a resemblance that no one ever noticed until I adopted a different mode of dress. It’s a connection that means the world to me — now more than ever.

Yesterday I had to borrow a tie from my grandfather for the memorial, because the ones I’d packed (unaware that I’d be saying my farewells to my grandmother) seemed inappropriately cheery. Not that Grandma would have minded my wearing a colorful tie in her memory, but sometimes it’s OK to step in line with social mores. I selected the one pictured above.

“Turn and let me see,” he replied. He looked for a moment and nodded, then told me to keep it after the memorial. I found myself suddenly choked with emotion and thanked him. It’s a great tie. I’ll be wearing it often with the hat Cat gave me, and not just because they look good together. I don’t know how much longer my grandfather will be with us, especially now that the love of his life is gone, but I will always keep a part of him with me in how I present myself.

27 thoughts on “The personal in personal style”