Back to the acid-washed roots

A very long time ago — I guess about 20 years (!!) now — a friend tried getting me into the band Hawkwind. It didn’t really take until recently. Remember how I mentioned a few months back that playing The Elder Scrolls made me want to listen to Hawkwind? Yeah, well, that never quite went away. And, as it happens, I came into possession of quite a bit of iTunes Music Store credit around then, so I ended up sinking about $75 imaginary dollars into Hawkwind and listening to albums that I could never quite convince myself to pay megabucks for back in the day. $50 always seemed way too much for ultra-rare triple-CD Levitation, even if it is considered a genuine classic. But 30 space bucks? Sure, why not. 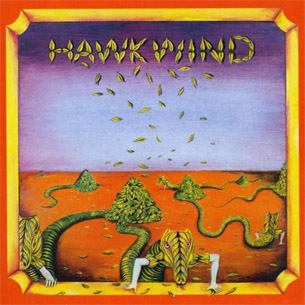 Somewhere in there I picked up the band’s eponymous debut album, and I finally listened to it today. Suddenly, everything fell into place! I’ve never quite known what to make of Hawkwind, but after hearing where they started out, it all makes sense at last.

Yes, I know they’re a “festival” band, a predominantly live act given to playing extended jams; but it wasn’t until today I realized that they basically came from the same gene pool as Pink Floyd and Led Zeppelin: The UK psychedelic scene.

Hawkwind is a bit deceptive, because its bookend tracks are very bluesy… not that Zeppelin and Floyd didn’t dabble in blues in their early days as well, but I certainly didn’t expect to hear a freakin’ harmonica in a band known for playing trippy space-jams with echoing guitars and sci-fi synthesizers. But “Hurry on Sundown” (which opens the album) and “Mirror of Illusion” (which closes it) are very much in the late ’60s tradition of bluesy rock with just a hint of drug abuse.

Add some flute and I could easily hear some of these tunes on an early Jethro Tull record. Like this one, once the beat kicks in:

In between those tracks, however, the album is basically an extended in-studio improv session, an audience-free take on what was apparently their live act at the time. If MP3s had video tracks, Hawkwind would be accompanied by pinwheeling stripes painted in bold contrasting colors while scantily clad go-go dancers writhe on the floor. And yet, there’s just enough continuity with the band’s later sound — mostly the loose, live-in-the-studio sound and Dave Brock’s vocals and guitar — that I can piece together how they got from covering Pink Floyd’s “Cymbaline” (which is one of the album’s bonus tracks, along with a Willie Dixon cover) to reciting Michael Moorcock verse on-stage as explosions sounded in the background.

It’s a pretty weird band. I think they’re a keeper.

P.S., attentive readers may have noticed certain patterns forming in recent content, which involves fewer postings of material from GameSpite print books and more me trying to write about things that aren’t video games so I don’t go insane. This is not accidental. I’d say it’s an attempt to rebuild the site’s flagging readership, but since I’m stuck posting about things that interest me — amateurish food preparation, rudimentary fashion, and ancient esoteric music — I don’t imagine traffic’s going to be trending upward anytime soon.

19 thoughts on “Back to the acid-washed roots”