Everyone loves new year’s projects, and this year Cat and I decided to embark on a good one: We’re going to cook as often as possible. Originally my plan was to cook once per week, a course of action I arrived at after realizing I felt terrifyingly overwhelmed preparing Thanksgiving dinner this year, but then we decided that if the two of us prep food instead of just ordering out all the time (which we’ve always done because we’re both too busy to spend time to prepare our meals) we’ll save a lot of money and eat far more healthily. And, in the process, I will learn about cooking. 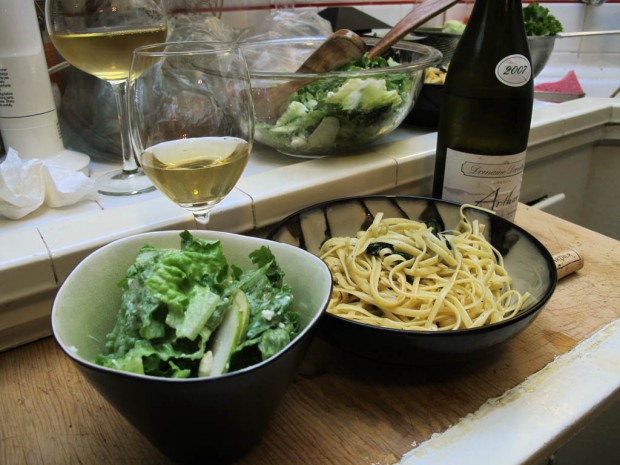 I requested a simple start, so for our first project we made a simple sauce for linguine and paired it with a lettuce-and-pear salad. Pasta’s easy enough, even for me (boil the water with a little salt and olive oil to add flavor and prevent clumping), but the sauce was a learning experience. I’d never minced or toasted garlic before and came very close to burning the oil; we also improvised slightly from the recipe and added spinach to the sauce, which was a slight miscalculation, as the vegetables simply soaked up the oil and left very little in the way of sauce. Still, we made the best of it and tossed the pasta in the sauce, and it worked out nicely. The sauce was garlic, oil, red pepper, black pepper, parsley, and spinach, making for a dish with slight heat and a peppery flavor. The salad (lettuce, sliced pear, feta cheese, and a bottled pear vinaigrette) made for a slightly sweet complement to the savory pasta. A success! 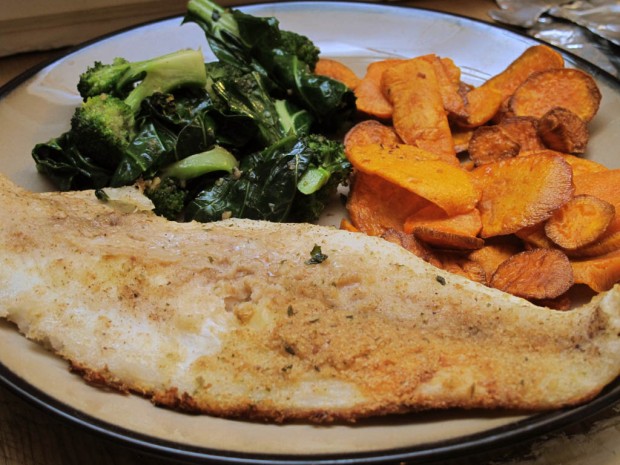 For last night’s dinner, the main thing I discovered is that mandolines are dangerous; hence the chunk missing from my thumb. What happened is that I was cutting sweet potato chips and suddenly I found myself cutting Jeremy chips instead. That was pretty messy (especially since it started to heal overnight but my bandage got caught on my pillowcase and ripped off when I moved my arm, bloodily reopening the wound), but I finally convinced it to stop bleeding once and for all this morning.

Anyway, the food. Cat prepped the fish on her own, using butter, breadcrumbs, e.v. olive oil, salt, and pepper to coat the fillets before baking them on a bed of sage leaves. I helped with the collard greens and broccoli, putting my newfound knowledge of garlic-sautéeing to prep the veggies. Fortunately these vegetables proved to be a lot less absorbent than spinach, so they didn’t end up being little wads of saltiness. And I managed to make the chips more or less on my own, cautiously fishing them out of the oil fryer with my off-hand. I’ve heard that you’re not a true chef until you have to reset the number on your “THIS KITCHEN HAS BEEN x DAYS WITHOUT A LOST-TIME ACCIDENT” sign and powering through anyway.

P.S., both meals were paired with a 2007 Chardonnay that is not worth recommending (but wasn’t terrible, either).

P.P.S., tonight’s dinner was leftover salad, eggs, and a bagel. Can’t go all-out every night, after all. I only have so many fingers to go ’round.