She’s got it where it counts

I’ve always had two favorite spaceship designs. Both hail from the sci-fi flicks I watched most as a kid, but I’m sure that’s a coincidence.

First, I love the U.S.S. Enterprise (particularly the film era version) for its luminosity and swan-like grace. Secondly, I love the Millennium Falcon for its being the exact opposite. Both ships are designed around the classic “flying saucer” form, but they take it in wildly different directions. The Enterprise bonds the saucer to the classic needle-nose rocket shape and augments the pairing with impossibly delicate sweeping “wings” that suspend its engines above and apart from the ship’s body. The Falcon, on the other hand, basically sticks a couple of prongs to the saucer form along with an awkward, asymmetrical nub of a cockpit, then plays up the gracelessness even further by being the first-ever movie spaceship to be slathered with big patches of dark red Bondo that the owner didn’t bother to paint over. It’s basically a broken-down space pickup running on the equivalent of an F1 engine.

Anyway, since these ships have held such fascination for me for the past 30 years or so, I always find myself scrutinizing their on-screen appearances to try and get a sense of scale and relation between the interior sets and the shooting models. The Falcon‘s cockpit has always been particularly interesting, since it’s roughly the size of a semi cab, glassed in, and should ostensibly show off the ship’s crew. When I’ve seen Star Wars in theaters (and more recently on Blu-ray), I’ve paid very close attention to its exterior cockpit shots to see how the inner details look from outside. Like, can I see Han and Chewie? How about the fuzzy dice? What’s in the cockpit? 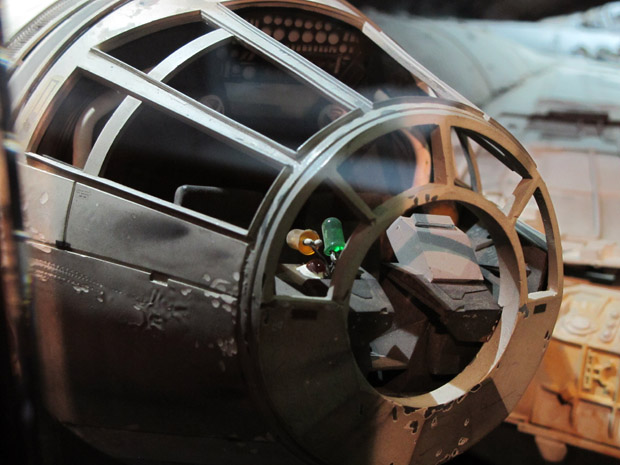 The answer is… a trio of old-school LEDs mounted to the pilot’s console. One green, one orange, and a smaller dark red one. When powered up, I would predict these create something similar to white light, obscuring the details of the cockpit interior for the camera. It’s almost a disappointing bit of fakery, except that I’m so in love with the chipped and pitted paint they added to the shooting prop exterior that I can’t really complain about learning the inglorious truth of what’s inside.

5 thoughts on “She’s got it where it counts”