I guess it’s Star Wars week or something

‘Cause I took a bunch of photos at that thing yesterday and I want to write about them. 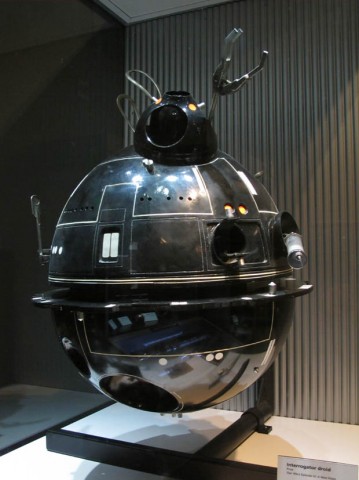 I enjoyed giving the original props from the Star Wars films an up-close eyeballing. The biggest shock was that some of the prequels were filmed with working shooting models, not just CG objects. But It was also interesting to look at things like the Imperial interpreter droid from the first film and realize it was basically just a bunch of random medical objects thrown onto a spherical plastic shell in a vaguely menacing manner.

In fact, I’m pretty sure that’s a set of OB-GYN forceps around back at the top of the thing. Apparently this thing doubles as both an interrogation torture device and an obstetrician. This could account for why you never see females serving in the Empire: Worst health plan ever.

Much less creepily, its off-the-shelf nature is betrayed by the syringe on right side of the ball. Well, somewhat less creepily. It’s not exactly awesome to have a hovering ball float up into your face and jab you with needles, especially if you’re jabophobic. But the whole thing suddenly seems a lot less sci-fi when you get a closer look at the syringe and notice that the props department didn’t actually bother to rub off the original branding and label: 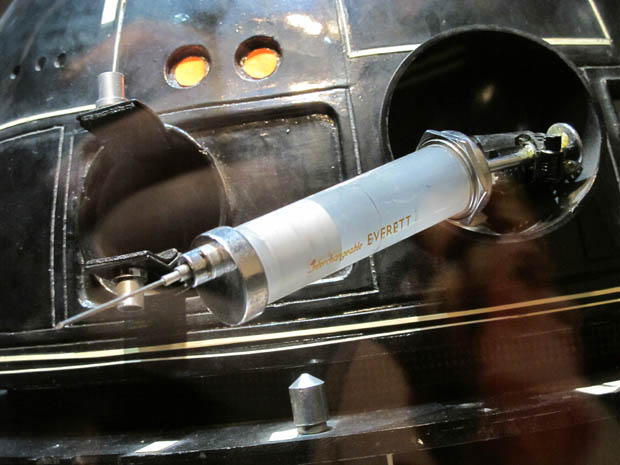 Yes. This torture droid brought to you by your friendly neighborhood Walgreens.