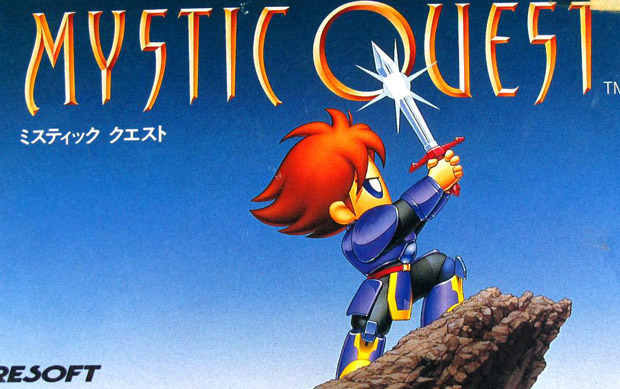 In the Japanese box art for Final Fantasy Mystic Quest, aka Final Fantasy USA (which is not a friendly “USA” suffix in the way the cool upgraded version of Doki Doki Panic became Super Mario USA, but more of a “USA dudes don’t get the sophisticated dynamics of this genre that originated in the USA” kind of snobbery), the hero appears to be stabbing the game’s title in anger. Ouch! Right in the Q. That about sums it up.

I actually didn’t get RPGs back then, not really, but I knew Final Fantasy well enough (after playing through the first two that had come to the U.S.) to realize something was grotesquely amiss when I played Mystic Quest. I was a pretty mellow kid and never really got angry at video games back then — aside from trying to get a fair fight against M. Bison on max difficulty — but Mystic Quest ticked me right off. At least I’d rented rather than bought it.

I admit I’ve developed a kinder perspective on it more recently, having come to the realization that it’s actually the sequel to SaGa 3 whose masquerade under the Final Fantasy Legend banner managed to stretch all the way back to Japan. At which point the jig was up; Square stopped peddling SaGa as FF Legend, and the SaGa 3 usurpers were supplanted once again by the series’ rightful king, Akitoshi Kawazu. So in its own way, Mystic Quest was a good thing.