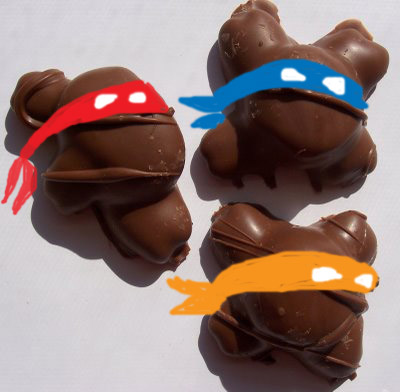 This is by far the most delicious entry in GameSpite Journal 10. Who doesn’t love chocolatey ninja turtles? All that nutty, gooey caramel goodness.

Also, please don’t ask where Donatello is in this photo. Let’s just say there’s a reason I can vouch for the tastiness of this article and leave it at that.

I had a lot of fun with Turtles in Time back in the day. It landed after the heyday of the arcade brawler — the “heyday” basically being before Street Fighter II showed up and made the concept of scrolling left-to-right in order to punch people’s faces seem way uncool — but it still got some play thanks to its great graphics and a lingering fondness for the brand. I was never a Turtles fan per se; never read the comics, never watched the cartoons. But I did play the games, going so far as to force myself to finish the cripplingly punishing NES original, and this was the most vibrant and energetic of them all.

After I’d owned the excellent SNES port for the better part of a year, I decided to trade it at the local record shop in for a fresh new game… actually I think I traded it for a Can album. Que sera sera. Anyway, my girlfriend at the time saw me trading in the game and derisively laughed, “Who does that belong to?” She was kind a crummy human being, as it turns out.