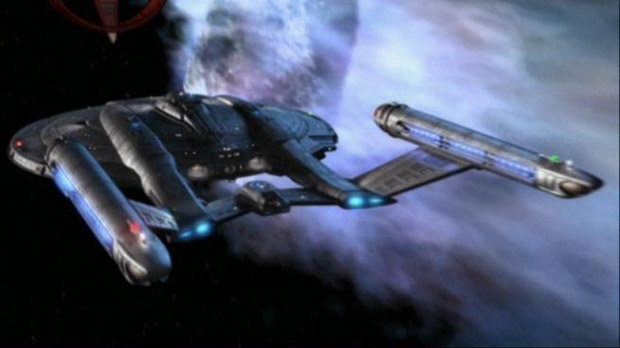 My writing about Star Trek seems to have elicited mixed reactions, many involving pure bilious hatred. So I’m doing a bunch at once. It also helps that I’ve been so slammed with my Skyrim review play through that I haven’t had time to write these, or to participate in the exercise sessions which serve as my only TV time. I may be getting fat, but at least your suffering is diminished! Anyway, I’ve taken in a bunch of episodes, mostly over the weekend while I was storing up workouts in advance of my sedentary review life the way squirrels sock away food for the winter.

“Breaking the Ice”: Another chapter of the ongoing “Gosh those Vulcans are so mean” plot thread; this one manages to rise above mundanity because it actually does a pretty convincing job of building a decent foundation for a friendship between Trip and T’Pol, and because it doesn’t take the predictable way out of the crew’s main predicament: They actually swallow their pride and ask the Vulcans for help. Respect +10.

“Civilization”: Not a great episode, but enjoyable nevertheless. The crew goes down to a planet that hasn’t gone industrial yet to investigate anomalous power readings and find covert aliens up to no good. It’s very “original series” with its dust-up of a climax and the fact that the captain gets to kiss a hot native. The most impressive thing, though, is that the Trek creators have finally managed after nearly 40 years to create alien civilian wear that actually looks pretty good — very rustic but not primitive, with lots of detailing. But this isn’t Fashion It So, so never mind that.

“Fortunate Son”: The dud of this batch, this episode had potential but the writers went the boring, lazy route. Lots of dumb decisions and unconvincing “inspiring” speeches. Gross.

“Cold Front”: Part of the big “temporal cold war” plot arc, which I’m not entirely sold on yet. This episode is fine, but all the neat gadgets from far in the future somehow conveniently end up lost or destroyed. Also, if dudes from the future are watching the past to prevent timeline contamination, shouldn’t they have maybe stepped in and beaten up Nemo? Just wondering.

“Silent Enemy”: I watched this episode less than a week ago and don’t remember it at all. It is like an inky black void of nothing in my memory.

“Dear Doctor”: Pretty much a ripoff of M.A.S.H.’s letters-to-home episodes, all the way down to the fact that it’s a doctor providing the narration. And that’s OK. I remember this episode being pretty controversial since it involved the captain allowing an entire civilization to very likely die of genetic degradation, but honestly in my opinion that controversy makes it a successful episode. Trek has a tendency to wrap things up neatly, and only a few episodes of previous series have ended with the captain-du-jour staring pensively out a window into space as uncertain music plays. This episode doesn’t take the easy way out, and despite the clunkiness of “We oughtta have some kind of, of, of directive! Yeah,” I think it’s probably the most effective expression to date of the idea that this crew is less tested and has less precedent to lean on than the characters of later (in the timeline) series.

“Sleeping Dogs”: Klingons are grumpy, and Archer is learning to grok their culture. A pretty fun episode.

“Shadows of P’Jem”: An interesting and involving follow-up to “The Andorian Incident” which sees the Vulcans annoyed about Archer exposing their hypocrisy and therefore taking their T’Pol and going home. Consequences! T’Pol is slowly becoming a likable character, and Archer is steadily becoming less of a schmuck. The bit where T’Pol smothers Archer with her rather large space-breasts is wincingly anime, but otherwise a really good episode. In fact, the balance of this series so far is definitely positive — it’s not great, but there are very few episodes so far that I’ve genuinely disliked or even found lukewarm. And supposedly this is the bad season.