I’m not sure what frontier this is we’re exploring, but I don’t think it’s exactly final. A semi-fatal frontier, maybe, since every post I publish gets less and less traffic. How long until no one is reading GameSpite at all? I predict July. That doesn’t give me much time to get through all these DVDs! So I’m wrapping three episodes together. 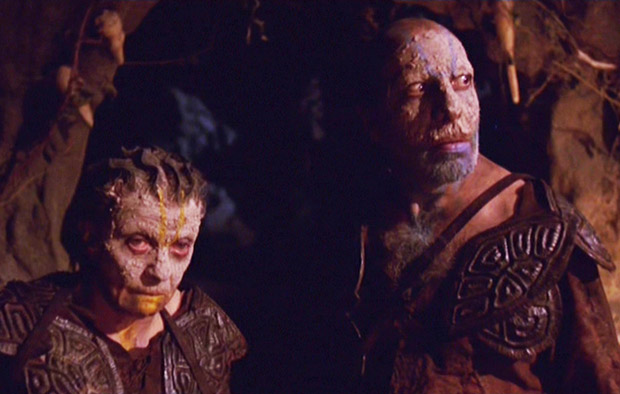 Unexpected: In this episode, Commander Tucker visits what is basically an Asari ship and unwittingly conceives a child with Liara T’Soni’s big sister (not through sexual contact but rather through sharing emotions and indirect physical contact — seriously, Enterprise is basically the Mass Effect bible). The difference between this and that one episode of The Next Generation where Counsellor Troi accidentally gets space-pregnant is that it’s a male character who carries the child. (Sadly, this doesn’t keep to The Cosby Show canon on male pregnancy, so Trip doesn’t deliver a 12-inch sub and two-liter of orange soda at the end.) What isn’t different is that it’s still a pretty crappy episode and premise, and further cements the previously established notion of Tucker as a complete twit who has no business making first contact. And people wonder why this show bled viewers even faster than this website!

Terra Nova: Chronologically, I guess this is the first of Trek‘s recurring missions to make contact with lost human colonies, which is a pretty neat idea. However, it’s pretty much completely rote — however will the crew manage to gain the trust of the suspicious lost colonists and save them from themselves!? — and all I could think about while watching this was how terrible a race of people who have lived underground for 70 years must smell.

The Andorian Incident: Ah, this is more like it. This episode, which sees the crew wade into the thick of a planetside terrorist incident, is by-the-numbers Trek, but at least this time the crew bumbles into somewhere they didn’t belong in the first place with good intentions. What makes it more interesting is that the core dispute is between two of the franchise’s mainstay “good guy” aliens, the Vulcans and the Andorians. The latter are those blue-skinned, white-haired dudes with the little antenna stalks; one of them served as president of the Federation in one of the films. Seeing them embroiled in a bitter dispute is actually kind of interesting and finally gets to the core of what gave Enterprise potential in the first place: Not an hour of watching humanity stumble through space each week, but rather a chance to explore the roots and evolution of the better-known Trek universe. If the show goes more in this direction, I’ll be OK with it.

But… given the track record so far, I predict the next episode is going to be about Tucker spilling beef broth on T’Pol and causing her to have a near-fatal anti-meat allergic reaction, which the crew will then mock her about. Then Captain Archer will spend a week in sickbay after accidentally stepping on a rake that someone left laying in engineering and smacking himself in the eye with the wooden handle. Meanwhile, Hoshi meets a sexy alien strip-dancer and learns there’s one language she’ll never fully understand: The language of love.

Actually… I would watch that.