BakeSpite: Eating well amidst the nerds

New York Comic-Con was a unique experience for me: It was the first convention of this sort where I actually managed to enjoy everything I ate. No miserable subsistence on dry shingles of pizza this year. New York is a city renowned for its great food options, but to see that reality manage to penetrate the impermeable walls of a convention was quite the pleasant surprise.

I actually found good food — and cheap! — at the back of the main exhibition hall in the form of a booth I read as “Koredog,” although my Google efforts reveal no such vendor by that name. So who knows? Anyway, Koredog-Or-Whatever was interesting enough that I overcame my aversion to tubes of mysterious pulped meat and ordered a hot dog for the first time in… maybe a decade? It was worth it. 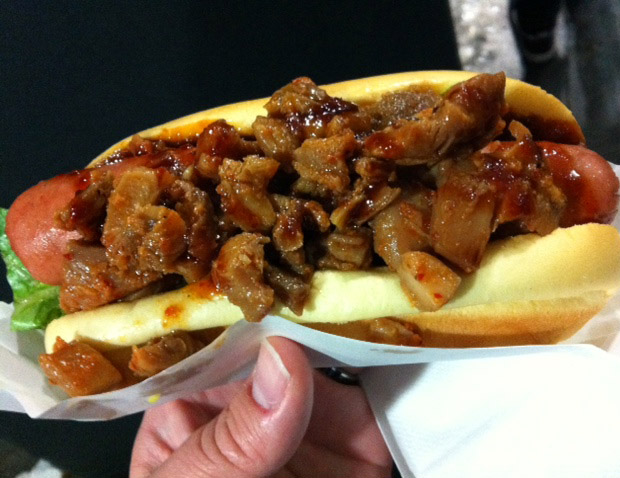 Koredog-Or-Whatever is, basically, a chili dog. Instead of just slopping soupy ground beef over your weiner, though, they instead go all Korean on it and slather it with either spicy chicken or bulgogi (thin-sliced beef). In my opinion, the chicken was a lot better, as the beef was slightly dry and the sauce they used for it was a little too much like mesquite-smoked barbecue sauce to taste particularly, you know, Korean. Each dog also includes lettuce and pickles, though I dropped the latter because they were foul-looking America-style Western dill instead of kimchi or those little pickled sardines you get as appetizer dishes when you go out for Korean. Anyway, good stuff (it helped that the dog itself was way, way better than your standard Oscar-Meyer tube of tears), and surprisingly affordable at five bucks. If this place that may or may not be called Koredog really exists in the real world, I cheerfully encourage everyone to try it out.

I also took a couple of side excursion to Go Go Curry, which (being at 38th and 8th)  was a little less than a mile from the Javits Center and therefore an easy walk in pleasant weather. Also, in rainy weather. Some things are worth getting soaked for, you know? 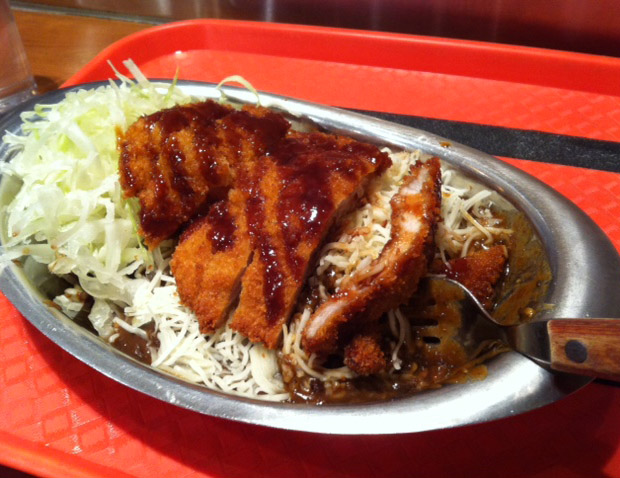 This was definitely one of them. And yeah, I put cheese on my curry. Look, you’re already eating a plate of sugary starch slathered with fatty sauce topped by a fried piece of pig; you might as well go all-in and enjoy it.

9 thoughts on “BakeSpite: Eating well amidst the nerds”