It’s been a long time

Well, I made my way through the last of the Star Wars Blu-rays last night. The Internet’s preemptive bellyaching about the changes wrought by George Lucas was definitely excessive. I wouldn’t even have noticed most of the tweaks if I hadn’t known to look for them, and they were certainly nowhere near as disruptive as the Special Edition revisions (most of which I still find jarring, having watched the original trilogy practically weekly with my roommates for a year or two in college). I didn’t even mind “No… NOOOOO” — it didn’t feel particularly out of place, and it was nowhere near as hammy as the shout from Episode III that it was clumsily meant to mirror. On the whole, six fun movies… although only the very first two (first two filmed, not first two narratively) are actually genuinely well-crafted movies. How I wish Lucas had taken the time to go back and look at the basic film and editing techniques employed in his original creation.

The real takeaway, however, is that having finished Star Wars, I am free to begin my Trek Trek. So I did. This evening. 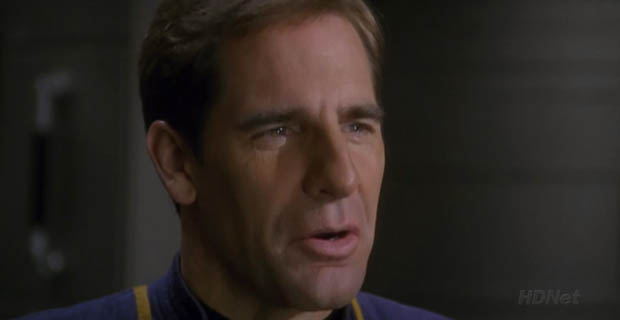 Man, I don’t remember this episode at all. I watched it when it first aired, but now that I think about it I believe I was trying to play Wario Land 4 at the same time and thus invested more of my attention on finding a good angle for getting lamp light to illuminate my Game Boy Advance’s screen than I did in what was on the TV. It’s all Nintendo’s fault, is what I’m saying.

So far, the episode (read: its first half) is a lot better than Captain Archer’s expression would suggest above. There’s less of the eggy flatulence you imagine he’s smelling there — in fact, I’d say that the is the strongest Trek pilot in the franchise. Granted, I’m only halfway through the episode and haven’t reached the infuriatingly out-of-place space-boner-rubdown sequence, so I reserve the right to change my opinion later. But it has clearly delineated stakes, does a fine job of setting up an outline for its crew without dragging the pace down by trying to go into too much detail about their personalities right away, and tells a pretty interesting story. I could do without the HYUCK WE HYU-MANS IS REAL SMRT IN SPACE subtext, but I do like seeing the patronizing attitude of the Federation brought to bear on earth dudes. Suck it, Picard!

I also like the details in this episode. The overall design of Enterprise NX-01 herself is a little too sophisticated to come before Captain Kirk’s very mod-looking ship; I guess that’s been explained away by saying starship aesthetics got all fancy in the past because of the time travel in First Contact or whatever. But I dig the workmanlike, NASA-esque uniforms, and the pump-action plasma rifle the farmer wielded at the beginning was delightfully silly. Also, the dog is adorable, so… so far, so good.

I don’t remember Ensign Mayweather at all from my previous viewings of the series. If they do that stupid sci-fi thing of killing the black guy early to show that the situation just got real, I’ll be very disappointed.

9 thoughts on “It’s been a long time”