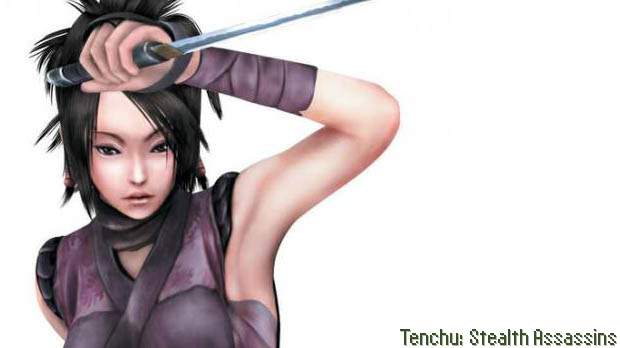 The phrase “stealth kills” has always struck me as a warning against being too sneaky for fear of its potentially deleterious effects on your health, but in games like Tenchu this is absolutely not the case. In fact, it’s lack of stealth that visits upon players bodily harm.

I always liked Tenchu in principle, but I don’t know that I ever got past the first stage — maybe the second? — because the boss fights were so terrible. Terribly acted, too. It’s a problem that even modern masterpieces like Deus Ex: Human Revolution suffer from. You sneak and crawl and dodge conflict, then the obligatory high-damage-threshold meatwall comes along and forces you to abandon the precepts of silence and avoidance in favor of rote trading-of-blows. I feel like people who make games like that should be forced to play Metal Gear Solid 3 and observe the brilliance of its boss scenarios — “battles” seems too mundane a term in many cases — until their eyes bleed. Though of course the original Tenchu gets a pass because, as noted in Jacob Smiley’s second consecutive GameSpite Quarterly 8 article, the game predates the first Metal Gear Solid by about a month. Human Revolution, on the other hand, has no such excuses.

Despite never having finished Tenchu, I know its soundtrack inside and out. I used to listen to that CD constantly. Jacob’s article vaguely disparages it, but don’t believe Ondore’s lies; it was and is a fantastic collection of music, and it’s also notable for being one of the few times Sony’s disparate arms (in this case, SCEI and Sony Music) have ever managed to collaborate.