Talk about a blast from the past — a friend of mine on Facebook dug up this old chestnut yesterday: 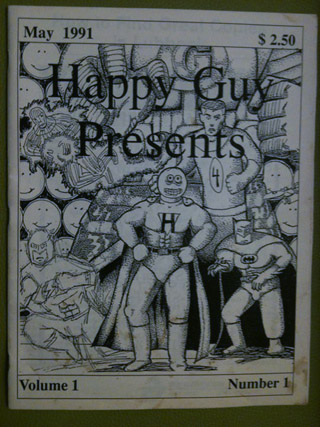 My very first independent publication project, Happy Guy Presents! Well, I shouldn’t say “my,” since it was actually the brain child of my friends Jay and John. I contributed to it, but they masterminded it. It was pretty much exactly what you’d expect a bunch of high schoolers to put together in that curious time of transition between the ’80s and the ’90s proper (the Berlin Wall had fallen, but we were still unaware of the potent aroma possessed by Teen Spirit). It featured lots of snarky articles about the school system, as well as forays into crass humor that, in retrospect, seem so squeaky clean it’s almost embarrassing. A more innocent time, to be certain.

My only contribution to the book was art, since this was back when I still thought I had some sort of artistic talent. Among other things, I drew the cover, which as you can see featured the publication’s eponymous mascot (a smiley face with bloodshot eyes and a drooling grin) as a superhero being loathed and despised by more established heroes. As another sign of the times, this was just before X-Men #1 propelled that particular franchise to the top of the charts, so I used the Fantastic Four as my Marvel stand-ins (because they were being drawn and written by Walt Simonson at the time, and it was an amazing run). I have to say, though, the little Enterprise in the background that slightly overlaps the edge of Galactus’ skirt to demonstrate his scale is a pretty thoughtful detail. Also, stippling for superhero comic shading was definitely going against the Jim Lee crosshatching zeitgeist of the day. Good job, younger version of Jeremy Parish. You get a cookie. Just one, though. One cookie.

Happy Guy #1 was photocopied and distributed at local comic shops on consignment. I don’t think we sold a single copy. We did, however, nearly get our journalism teacher Mr. Kopf fired. Apparently the school administration caught wind of this book and its rather pointed attacks on the district superintendent and some of his lackeys, so they called Mr. Kopf in on the carpet to blame him for our shenanigans. As near as I can figure it, their case was that in teaching us to create publications (which was, you know, his job), he gave us the tools to make fun of the school district in print and therefore was to blame for the book. This was very much in line with our district administration’s general disdain for education and independent thought, so it’s not really much of a surprise in hindsight. Why, his journalism class was a veritable CIA, teaching us little Osama bin Ladens to commit acts of word-terrorism! Wait, no, never mind, bad analogy. No one’s ever been called on the carpet for the bin Laden thing.

There was never a Happy Guy Presents #2, as the second issue sort of fizzled out over the summer as we got summer jobs. Last I saw, Jay was busy using his family’s jaw-droppingly-awesome-at-the-time Macintosh Quadra to play SimEarth rather than dabbling in further seditious desktop publishing exploits. But hey, Happy Guy‘s legacy lives on in its small way: I still publish my own books and magazines. Although I don’t think I’ve gotten anyone else in trouble over them lately. I guess I’ve lost my edge.